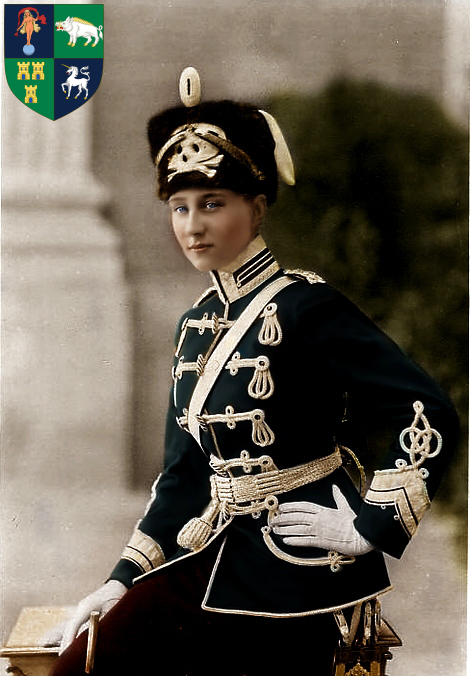 Merkismaðr of the Vanic Temple Guard in the parade uniform of a Stratioti (scout). 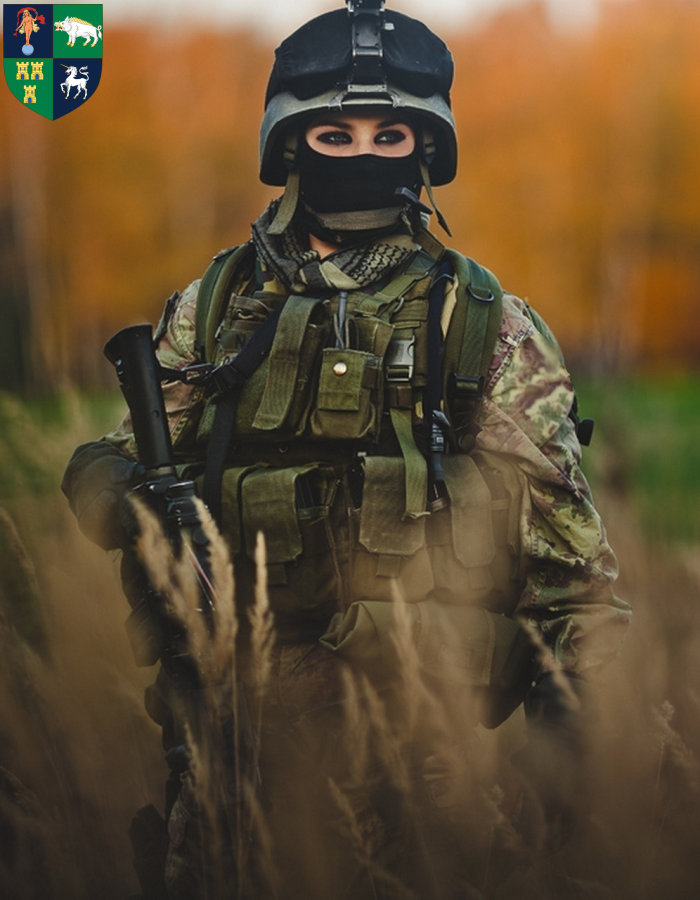 A female Vanic Temple Guard in Combat Dress during the River War. 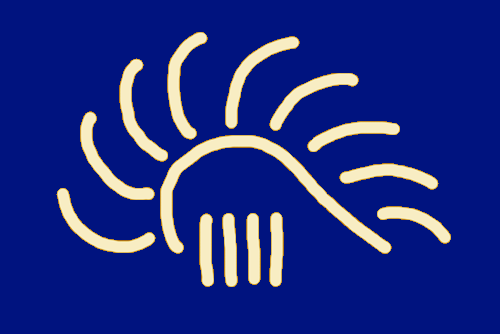 The Banner of the Vanic Temple Guard, which features a stylized version of the Golden Boar.

The Vanic Temple Guard (VTG) - also known among the Elwynnese Vanafolk as Elwynns Eorlwerod (EE), which means Elwynn's host of noble warriors in the Angsax language - is an armed force raised and maintained by the Hjartardýrlafðir for the glory and protection of the Church of the Froyalanish Ancient Ways. The VTG is held in strict subordination to the Yfirfroyalansgythia‎ and owes her absolute obedience.

Spiritually the Vanic Temple Guard traces its roots back to the temple guard that was raised by Lady Lilja the Devout, the foundress and first High Priestess of the Thingeyri Temple in times ancient beyond the memory of woman for the purpose of performing sentry, protection and ceremonial functions at the Thingeyri Temple.

Its Elwynnese origins can be traced to the guards of the Vattnalandish temples in the days of yore and the Huskarls from his retinue which the Count Harald of Araxion put at the disposal of the first non-Vattnalandish temple of the Ancient Ways, the Vanic Temple in Araxion which is ever since the inclusion of the Goddess Elwynn in the worship of the Froyalanish and Wintergleamish Vanafolk known as the White Orchid Temple.

The Vanic Temple Guard was established in 1624 by order of the Hjartardýrlafðir which was issued under Article the Eleventh of the Concordat of Avaldsnes on the same day that the Steward of Elwynn Hallbjörn Haraldsson could finally ratify aforesaid treaty after a long delay of about a year caused by the absence of the Landsraad leadership, an issue which was solved by the election of the Lady Fjǫrleif Hallbjörnsdóttir to the Prætorship of the Landsraad. Initially known as the Queensguard - named after the Sacred Queen of the Elwynnese Union, the Lady Elwynn - the VTG exploded onto Elwynnese Society quickly becoming a trusted and appreciated partner for the Fleur de Lys-Longships Guard, the Corps of the Gentlemen-at-Cudgels and the various City Watches all over the Lands of the Two Sacred Rivers as well as - after 1629 - the Union Defence Force.

The name of Queensguard was officially abandoned in favour of "Vanic Temple Guard" after the latter name had among the Twelve Peoples of Elwynn evolved into the household name of the force. Even so there are still a number of units of Elwynns Eorlwerod such as the Garde de la Reine Sacrée/Beakyr Taarion Hyel and the Drottningsgarde which refer to White Orchid Lady's Sacred Queenship of the Coast to Coast Kingdom. The distinct body of law that governs the Vanic Temple Guard - which includes the Concordat of Avaldsnes, the Eorlwerodsbóc, the Fréolsbóc, Gyllmára Búllar, Lilja Búllar, other Vanic Law and the numerous conventions between the Hjartardýrlafðir and the White Orchid Throne - has, however, remained known as Queensguard Law.

Survival as the "Vanic Web"

The Vanic Temple Guard exists for the purpose of carrying out sentry, protection and ceremonial duties for and at temples of the Froyalanish Ancient Ways in Elwynn and other premises, sites and establishments in the Flower of the North which are under the temporal or spiritual authority of the Church of the Froyalanish Ancient Ways as well as the clerics, guests and staff of the aforesaid.

By mutual agreement between the White Orchid Throne and the Hjartardýrlafðir, Elwynns Eorlwerod has also assumed the duty to, where appropriate, render assistance to the various authorities and organizations which are concerned with the safety of the Lands of the Two Sacred Rivers and its population.

The Yfirfroyalansgythia‎ is, by virtue of the powers conferred upon her by the Eorlwerodsbóc which was issued under Article the Eleventh of the Concordat of Avaldsnes, Commander-in-Chief (Gúðcwén, GW) of the force and every aspect of its organisation and administration lies, subject to the provisions of the Concordat of Avaldsnes, within her gift. Gúðcwén means "warrior queen" in the Angsax language.

The Yfirfroyalansgythia may choose to appoint a Stallari of the Vanic Temple Guard to whom would be, at the discretion of the aforesaid Princess of the Ancient Ways, delegated some or all of the powers pertaining to the organisation, rank structure, training, discipline, efficiency, administration and good government of the VTG. Such Stallari would usually be the most senior Eorl of Elwynns Eorlwerod.

Eorlwerodsbóc, which means charter of the host of noble warriors in the Angsax language, is the entirety of rules, regulations and policies for the good government of the Vanic Temple Guard that the Deer Ladies have issued under the Concordat of Avaldsnes.

In accordance with the Angsax warrior traditions of the Vanic Temple Guard the Angsax language, in particular the dialect spoken in the Storish Jarldom which is known as the Duchy of Port Chloe and the Providence Plantations, is the official language of Elwynns Eorlwerod. The aforesaid Anglo-Norse dialect is quite easy to master for people of Wintergleamish, Froyalanish, and Norse descent who make up the bulk of the personnel of the Vanic Temple Guard.

Over time, however, the jargon of Elwynns Eorlwerod has come to include several loanwords originating in the Union Defence Force and the Fleur de Lys-Longships Guard, a consequence of close cooperation with and a steady staff influx from those armed forces.

Vanic Temple Guards have a - very correct - reputation of being dashing, daring, slightly wild, fierce, lustful, forceful, pugnacious, sarcastic, assertive, hard-partying and promiscuous swashbucklers. They are also known to be excessively fond of pomp and circumstance and pageantery resulting in them performing as well as taking part in numerous ceremonies at temples, Godsgroves, Worship Waters, Stone Circles and various other sites.

Among the rigorous requirements an individual has to meet to be eligible for service in the Vanic Temple Guard are:

As a consequence of the aforesaid recruitment policy, the bulk of the personnel of the Vanic Temple Guard is made up of individuals of Wintergleamish, Froyalanish, and Norse descent with the occasional Babkhi with roots in the former Storish provinces which were known as the Viceroyalty of High Queen Asa, the Jarldom of the Land of Stormark's Rose and the Sultanate of Deryacezamin thrown in the mix. Elwynns Eorlwerod is also teeming with Daughters of Elwynn, especially in the upper echelons of the force.

The ranks of the Vanic Temple Guard are chiefly derived from the ancient and rich Angsax warrior tradition of the Princely Precinct of the Elwynnese Union which is known as the Jarlorð of Jorvik and the Storish Jarldom which is known as the Duchy of Port Chloe and the Providence Plantations.

Ranks of Rank and File

By convention between the White Orchid Throne and the Hjartardýrlafðir agreed upon in 1624 subsequently to the coming into force of the Concordat of Avaldsnes the maximum strength of Elwynns Eorlwerod shall not exceed one-third of the Statutory Maximum Manpower of the Fleur de Lys-Longships Guard.