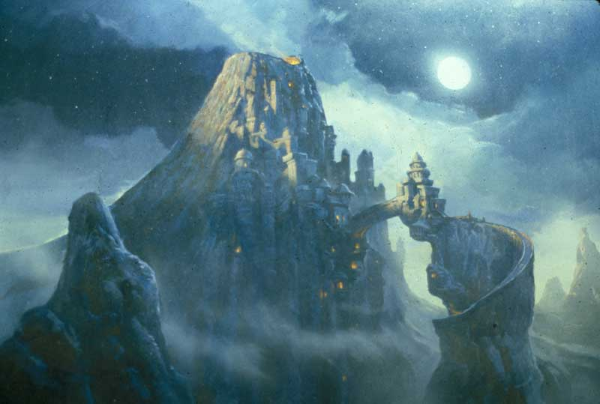 Mount Yaanek, the sacred volcano of the Isle of Bifrost where the Goddess Elwynn lives.

Mount Yaanek (Hyperborean: Ianakve; Elw: Jaanaq) is one of the most historically important volcanoes on Micras and pretty much unrivalled in the place it takes in the minds of people. Through various violent eruptions throughout time, it really has left its mark on the planet. It rises 3273 metres over sea level.

The volcano is located in the middle of the Isle of Bifrost, which is the larger of the two Hyperborean islands - the other being the Isle of Volsung - that form the Duchy of Raikoth, which is the most northern Princely Precinct of the Elwynnese Union. The Royal City of Tala, the largest city and regional capital of the Duchy of Raikoth, stands on the volcano's lower slopes.