Built partly of ice, Thule (Kalasperelin: Tala; Kalaselithelin: Thulel; Elw: Tuule) is the largest city and regional capital of Hyperborea, Elwynn's and Shireroth's northernmost province. It forms one bailiwick in the Duchy of Raikoth. 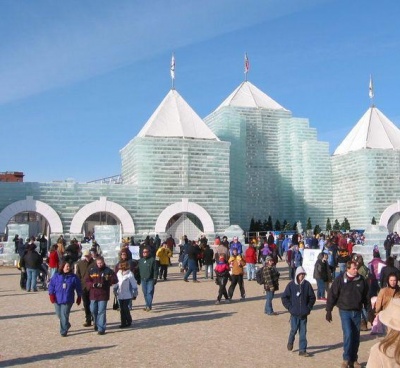 The ice gates of Thule will be the first sight to greet most travellers.

Thule was settled by colonists from Audentior during the last few years of that nation's history, making it well over 2000 years old. These colonists mixed with the local people, known as the "Volsaarns", to create a new utopian society, based around peaceful artistic and scientific endeavours. Thule, as the island's capital, hosts some of the world's most unusual architecture, and promises a once-in-a-lifetime experience for tourists brave enough to face its sub-zero temperatures and relative isolation.

Planes fly to twice daily from Shirekeep Airport to Cirrus Airfield, just outside Thule. These flights may be cancelled due to bad weather on the Hyperborean side, especially during the winter. Although there are occasional flights from other major hubs, especially Nafticon and Lindstrom City, these are seasonal and availability should be double-checked before booking.

In the winter, it is occasionally possible to cross the Tyrgaard Strait by dogsled; if you are adventurous and this appeals to you, call the Tyrgaard Tourism Agency for a price quote.

The city's most obvious landmark isn't a building at all, but the giant Mount Yaanek, a volcano upon whose lower slopes Thule stands. From anywhere in the city, the mountain is due east and the sea due west, making orientation simple.

Every tourist's first stop in Thule should be the twin Temples of Truth and Beauty in the center of the city. The Temple of Truth is one of Micras' largest libraries, and although most of the scrolls and books there are in one of the Hyperborean languages, certain exhibitions, like the Map Room, are nevertheless impressive. If you are an academic in Hyperborea for research purposes, call the Temple beforehand and they will have a guide who speaks your language ready to show you around.

More impressive to most people is the Temple of Beauty, right next door, which houses both Hyperborean and foreign art. Collections by Babkhan, Shirerithian, Atteran, Treesian, Adrasian, Numenorian, Riponian, and Antican painters and sculptors fill the lower levels, while the higher levels are native Hyperborean works. In the center is a great concert hall, where native musicians play songs in the haunting Hyperborean style almost every night. Details of the night's performance can be found on the board just left of the entrance.

After the Temples, you'll want to head further up the mountain to the Council Hall, center of Hyperborean government. You're not allowed to watch Council proceedings (even if you were, you wouldn't understand them; they're conducted in Kalaselithelin, a particularly obscure form of the Hyperborean language) but if there's no meeting going on you can enter the central chamber, constructed entirely of ice. Just outside is a small museum with exhibits in Common about the Hyperborean government; often on Morsdays a Councillor will be available to give a lecture and answer any questions.

If you're in great shape, a stone stairway from behind the Council Chamber leads up the slopes of Yaanek. About an hour's walk up is the Temple of Yaanek, dedicated to the god of the volcano. The Hyperboreans believe its oracle, located in an ice cave to the back, gives true advice and prophecies on a variety of subjects. If you know Hyperborean, you're welcome to consult the oracle yourself; talk to the priests beforehand and be prepared to "donate" a hefty sum and go through some purification rituals. If you're not in the mood for advice, enjoy the ambience of the temple and the amazing views of the city below.

Anyone interested in adventure sports or in nature will want to get out of the city as soon as possible to explore the Hyperborean hinterland. Just inside the West Gate, near the port, is a company specializing in such tours. The best place for spotting polar bear and walruses is the northwest of the island; those with an interest in skiing or mountain climbing will want to try Mount Yaanek's famous South Slope.

Although Hyperborea uses the Shirerithian erb, it also has special dispensation from the Kaiser to print its own currency, the gold rhan. One rhan equals one erb; the difference is only cosmetic, and merchants will accept either. There is a branch of the Shireroth National Bank in the city that will exchange foreign currency for erbs or rhan. Be sure to take some rhan home with you; they are nice and shiny and make great souveniers!

There are no specialized shopping districts in Thule, but there are a few small souvenir stores here and there. The Hyperboreans love gems and stones, and their distinctive colorful jewelery and carvings make great presents. Hyperborean clothing, also colorful, is on sale nearby, but make sure you understand that it will probably be much too warm for wherever you live, and the more ornate robes can be extremely expensive.

Ice carvings are very popular among the Hyperboreans; any piece marked "vurach" in Hyperborean is probably made of ice. These will obviously melt once taken out of Thule, and are not intended for tourists. If you don't know whether a piece is ice or crystal, ask the merchant "vurachaph ku?" (is it ice?) and wait for him to nod or shake his head. Don't touch any ice carvings, as the warmth from your hands will melt them!

Among other things to look into are Hyperborean calligraphy, sigils, and of course the omnipresent snow globes.

Thule is one of the lowest-crime cities in Shireroth, if not the world, and its inhabitants are quick to forgive and slow to take offense. However, the city itself is dangerous; every year, travellers break bones slipping on the icy streets. Do what some of the natives do and carry a sharp staff; it will help you keep your balance (and be invaluable if you end up climbing Mount Yaanek to the temple).

Early signs of hypothermia include shivering, goose bumps, loss of feeling in extremities like fingers and toes, and your skin turning blue. If you think you have hypothermia, GO INSIDE. Most Hyperborean buildings are heated or well-insulated, and you can rest there until you feel better.

Remember that Yaanek is an active volcano; it destroyed Thule once, on 17 Blumuar 1471, and may do so again at any time. The Thuleans have detailed evacuation plans, and although the chances of an eruption while you are visiting are negligible, you should take some time upon arrival to acquaint yourself with them. If the mountain shows any signs of renewed activity cooperate with the local rhavakal in insuring a safe evacuation to the south (the rhavakal will be the people carrying silver swords).