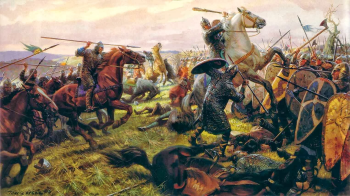 The Huskarliregementet repels the last charge of Antyan invaders during the Battle of Vijayanagara at the height of the War of Vengeance.

Huskarliregementet was the name that the battle-hardened retinue of Huskarls of Count Harald of Araxion had been given in the War of Vengeance for war administrative purposes.

The aforesaid Huskarls were veterans of innumerable battles all over the world as well as a highly respected – and feared - fighting force who were renowned for their effectiveness, lethality, brutality, and sheer ruthlessness on the battlefield.

Among the Twelve Peoples of Elwynn they are best-known for the part they played in the Battle of Vijayanagara, a pivotal battle during the days of the War of Vengeance which ended in a decisive Elwynnese victory and which ultimately determined the outcome of that war.

In the reorganisation of the Union Defence Force following the River War against Shirekeep the traditions of the Huskarliregementet were revived in the form of the Húskarlarbataljon as a heavy infantry force integrated into the brigades of the UDF's Territorial Defence Corps.

A comprised of three companies; the Úlfhéðnarkompani of forward skirmishers in the beserker tradition also used as scouts and suicide attackers if the situation warrants, the Svinfylkingkompani an assault group used to drive a wedge into enemy formations and named after the infamous 'boar snout' formation developed by the High King Harald of Stormark in the Conquest of the Heartland, and the Skjaldborgkompani a fire-support group generously equipped with heavy machine guns, anti-tank weapons, mortars and ballistic mantlets, named after the famous shield walls of the original Huskarliregementet.