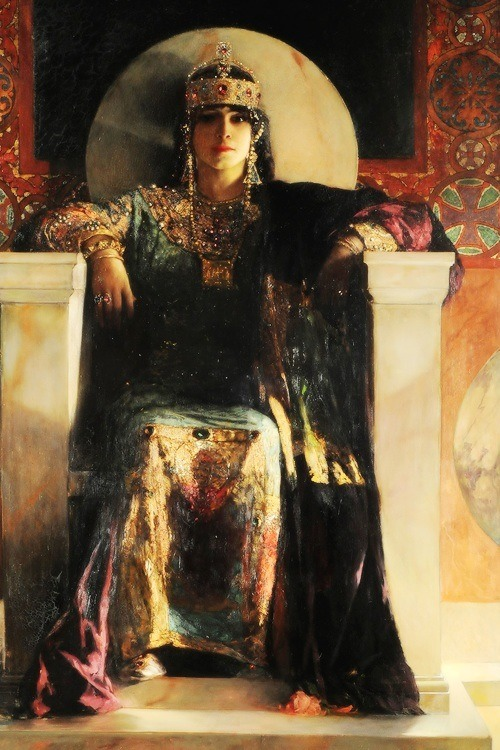 Liv Djupvik; enthroned, to her surprise, as Khanum of Cabbagefall in her own right.

Liv Dravot al-Osman (Elw: Лив Дравот ал-Осмон; née Djupvik, Дюупвик, Dyuupvik) (born 1615 in Shirekeep, died 1663 in Teldrin) was the mother of Kaiser Ayreon IV. Following her capture and forced marriage to Prince Adam Ayreon-Kalirion in 1644, she became his consort as Khanum of Cabbagefall. After her divorce by decree of Kaiseress Noor in 1645, she became Khanum of Cabbagefall in her right, until Layla Verion took over in 1650. Her only child by Adam, Vidar, was born in 1645, and ascended the Golden Mango Throne in 1650 as Kaiser Ayreon IV. Married to Daniyal Dravot 1650–1657, thereafter, since 1659 with Daniyal al-Osmon. Steward of the Imperial Republic, 1651–1654. Princess of the Elwynnese Republic, 1654–1658.

She began her studies at Metzler University in 1633 as an undergraduate learning the Benacian Classics. Whilst pursuing this she took an additional module in management studies. Her studies were disrupted in their final year by the sudden onset of the River War and the brutal Elwynnese siege of the city.

Like many patriotic citizens of the city she had responded to the crisis by enlisting with the Imperial Forces, for Liv this entailed joining the Imperial Volunteer Forces as a medical orderly and nursing assistant in the Field Ambulance Service before obtaining a transfer into an administrative role with the Commissariat. With the Commissariat she had followed a supply column into Alalehzamin and Utasia where her main role had been in the requisitioning of billets for officers attached to the column. She, along with most other support services personnel, had been caught up in the precipitous and headlong retreat following the Battle of Echo. Unlike many in her invidious position, she did not experience any notable harassment or molestation from the marauding bands of Babkhi who were had taken it upon themselves to ambush and plunder the fleeing Imperials. Her first and only brush with danger was when a salvo of unguided rockets fired from an light attack aircraft struck the convoy she was travelling as it departed southwards from Islus. Although she suffered no injury nor lost anyone dear to her in that incident, the memory of passing an overturned and burning ambulance in the aftermath of the attack would mark her deeply.

After the privations of the sanguinary but mercifully brief siege she had remained assigned to administrative duties at the MoMA Main Building until receiving her demobilisation papers in late 1636. Throughout her service she had been noted as being proper in the conduct of her duties but decidedly un-martial in her bearing and outlook. Returning to the Metzler University after its reopening for the 1637 term she concluded her studies in the following year and graduated having attained an honours distinction. She thereafter worked in Shirekeep's burgeoning, and notoriously corrupt, real estate sector until 1644.

In spite of working in an industry that was notorious for its sharp practices and amoral association with the most ruthless of slum landlords, Liv had retained the generous and trusting nature that had characterised her in childhood, even if the experiences of the war had robbed her of some aspects of her innocence. Her temperament was worldly rather than spiritual; better characterised by the enjoyment of life rather than it's contemplation. Her's was an open personality that tended ever towards believing the best in people.

That was a fault which would subsequently haunt her, having made the acquaintance of a certain Lord Adam.

Liv had, over time, become an acquaintance and then a friend of Queen Noor of Goldshire. During the Oustfest Massacre, the triumphant Adam remembered the family friend and made a visitation to Liv's residence. Travelling in disguise, owing to the disorder then prevalent in the city, he was initially mistaken for his brother Aldin. Nonetheless he was welcomed and received guest rights, whereupon he initiated intimate relations with Liv, his host and a considerably older woman, off his own initiative. Having found her performance satisfactory to his requirements, Adam made her subject to a marital contract and inducted her into his household in the Babkhan fashion. He subsequently had her brought into Goldshire where on 14 Oskalteq 1644, he formally decreed into law her new standing as Khanum of Cabbagefall.

Her feelings regarding her new circumstances went unrecorded.

Following the fall of Cabbagefall, Liv, Adam and their entourage were arrested and brought to Shirekeep. Liv was released and made a guest of Kaiseress Noor, where on 8 Gevraquun 1645, Liv gave birth to a son, Vidar Salim Livarson. Thereafter, Noor, as Queen of Goldshire decreed the marriage dissolved, terminated Adam's title Khan of Cabbagefall, and passed it on to Liv who now was Khanum of Cabbagefall in her own right. This, at least nominally, awarded Liv considerable political power in Goldshire under the Codex Aureus Regni. In practice however, owing to her lack of political experience and the traumatic circumstances of the preceding year, power remained concentrated in the hands of the Royal Chancellery, administered by appointees of the ESB-Jörmungandr Group under the chairmanship of Daniyal Dravot whom she married in 1645 AN as part of a new political alliance. As part of the pay-off for the marital alliance Liv received a directorship within the ESB Group and became responsible for the management of Government Outsourcing and Goldshire, reinforcing and in large measure restoring the ESB's hold on the machinery of government which had been weakened during the civil war and the reign of Adam Ayreon-Kalirion as Khan of Cabbagefall.

Discrete diplomacy had been ongoing for some time to come to a resolution concerning the status of Daniyal Dravot's marriage to Liv, the Khanum of Cabbagefall, under Elwynnese law. Although not Elwynnese by birth or inclination, Liv had been inducted into the House of Ayreon-Kalirion, somewhat against her will, by the young tyrant and regicide Adam Ayreon-Kalirion during the tumultuous year of 1644. As the forced 'wife' of Adam, she had borne him a son, Vidar, whom the circumstances of his conception made it impossible for her to love. Instead the infant was installed with a wet-nurse, and latterly a governess after teething, in the Steward's Tower of Raynor's Keep and there to be raised in an appropriate manner.

The marriage, although necessarily expedient for bringing about a reconciliation of the ESB backed Royal Government with the so-called Kalirion Khanate in Cabbagefall, had thrown up all manner of complications with Elwynn, where the King, Noah, jealously guarded the prerogatives he saw accruing to the White Orchid Throne and all those who married into the Elwynnese branch of the House of Ayreon-Kalirion.

On the 19th of Elroqpinu in the year 1646, the Family Council of the House of Orchids met at the Castle Islàn in the Old Harbour of the Royal City of Hyfrost to discuss a petition by Prince Hallbjörn of the Seven Ports, Princess Fjorleif Llængjarla of Amokolia, Princess Geirbjörg of Illumination and Cimmeria, Kaiseress Noor of Shireroth, and Prince Audun Joel of Araxion, to the King of Elwynn asking for a royal decree to legitimise the marriage in the context of Elwynnese law.

In spite of this however, the release onto the Elwnet of a video purported to be Liv petitioning through the medium of song and dance, combined with reports of Elwynnese peasants being up in arms along the borderlands between the two realms, set Liv on edge and made her determined that she would not be depicted as the cowed supplicant.[1]

Arriving in Kingsgate on the 22nd of Elroqpinu, Liv convened a general assembly of the militia of Suthergold, joined with the officers of the Jaysh al-Sathrati and the Field Army's II Corps, and gave a notable speech in what some have described as an attempt to salvage some dignity in the wake of the debacle surrounding "the video".

The Steward in Shirekeep, when he learned of his wife's speech, was mortified and sent legatine envoys to Kingsgate to calm the situation and prevail upon the militia to return to their peacetime billets. 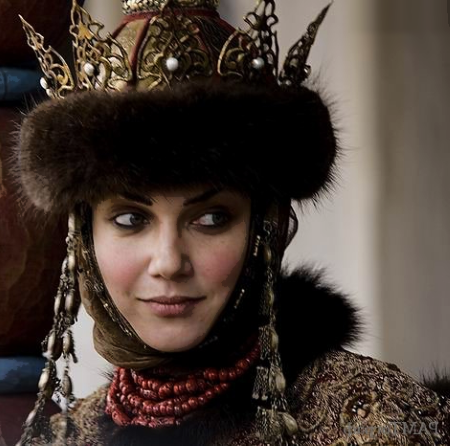 Liv as reigning Steward circa 1652 AN: It is a rare Steward that takes the opportunity to crown herself.

Her power as Steward rests heavily upon her position as mother of the Kaiser in whose name she reigns. Yet that same Kaiser, from whence her power and legitimacy derives, is the son for whom she can bear no maternal affection. She had no abiding desire to remain in Shirekeep, still less to pursue high office. When the Tokaray Scare gripped the surviving friends and associates of the Kaiser Dominus it was Liv who urged her aged husband on the course of flight to the obscurity of Ura'Bos. Yet throughout that brief exile the fear and doubt as to what Adam's son, conceived through rape and borne through an abduction and forced marriage, might become if indulged by sycophantic courtiers and left to pursue his own whims. It was that fear which spoke to her when she urged her husband to make an about face and once more take up the mantle of MoMA, lest the Froyalanish House of Ettlingar Freyu strengthen its hand at court.

Upon the return of Daniyal and Liv to Shirekeep they quickly became caught up in the events leading towards the Struggle for the South, where Lichbrook, Minarboria and Mishalan fell in swift succession. At the same time an anti-Elwynnese reaction began to grip Shirekeep and the Landsraad itself, where many notables looked askance at King Noah's avaricious devouring of the failed soviet state of Mishalan. The southern aristocracy, humbled too many times in recent years by the Elwynnese colossus, found itself gripped by an unlikely sympathy for the Mishalanski. This was less out of concern for the Communists, whom many felt were receiving their belated due, but rather more for the ordinary folk who had merely exchanged the nomenklatura for a gaggle of over-titled Vanic extremists. The fury of the reaction had already claimed the scalp of the Steward, Kyle Kilynn, who had only clung on long enough to see Kezan attain statehood. In this emerging power vacuum, Liv, for whom the indignity of Noah's reaction to her marriage still rankled, sensed an opportunity to at last settle the score.

The Principate in Elwynn