Suthergold is one of two Counties of Goldshire bordering Elwynn (the other being Wintergleam), occupying what was once the northern reaches of the old Duchy of Ynnraile. Its people are best known for their outgoing temperament, and an aversion to death from conflict.

The northern lands of Goldshire are shrouded in mystery, being extremely sparsely populated until the 6th millennium with even the famed rulers of Ynnraile giving it little attention. Legend has it that the County of Lombardia, established by Duke Erutirn of Goldshire and his paladins, existed in the area some time around 2000 ASC. Aside from that the area has been left to its own devices, allowing for the formation of a distinct civilisation.

The origins of modern Suthergold lie with the arrival of Ryker J. Everstone, who took over the County on his arrival in Shireroth. The Sutherlanders, a nomadic northern Benacian tribe who founded a settlement in Suthergold's northwestern salient, were made known to Count Everstone during an initial survey of his newly acquired land. After some talks with the Sutherland officials, Ryker made them amiable to the idea of assimilation back into their old country. From there, Count Ryker sent them into the old County of Goldendown, which had existed almost constantly without government since it was established by the New Feudalism of 2285. Over the course of some generations they reached and occupied the abandoned city of Diarsanta and founded Cortallia, a rest stop exactly midway between Goldendown's capitol, Diarsanta, and Kingsgate (shortly thereafter declared as the capitol). Cortallia quickly grew when word spread of a new gold deposit. It was around this time that the Stoneharvest was held to scour ancient ruins in middle-Benacia for materials with which to build onto Kingsgate. During this great voyage, Suthergoldians encountered the Rathasians, a detached colony of ancient Benacians residing in the abandoned city of Luino. Their introduction into Suthergold was made easier on account of an old Shirerothian Hermit, Rathus, who had uplifted the tribal people by giving them medical science and arcane abilities. Ryker invited the Sutherlanders to establish a city with him just south of Cortallia called Rathwood. Years later it was found that a small group of the Rathasians had splintered and were Priests of the god of death, Dsun. These masters of death were led from taking life and quelled by the County's offer to make Diarsanta into the Priesthood's autonomous new home. The city was renamed Underwall, so named due to its intricate and nearly maze-like layout being primarily made up of thick towering walls which double as housing or other such buildings. And so Modern Suthergold was born.

In 5258 ASC Suthergold annexed the County of Asantelian to its east (with the exception of Avakair), giving it a stretch of Benacia's eastern coastline and Goldshire's entire land border.

After decades of mixing the different cultures, Cortallia and Rathwood grew into one another and formed the State's first metroplex, Cortallia-Rathwood (C.R.). High Harvest and New Harbor were founded both to create new homes for those seeking a simpler life (especially Elwynnese refugees) and to establish a steady supply of food for the evergrowing population in the western region of the county. Suthergold's majority ethnic group is Sutherathasian, spread throughout the county. 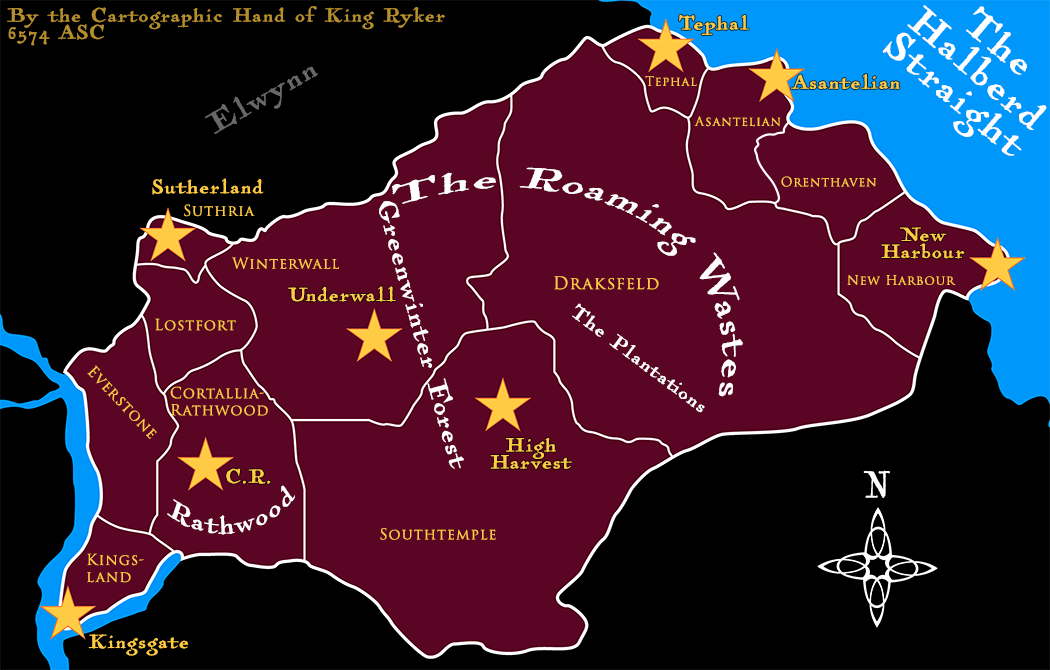 Suthergold's climate is on the colder side of temperate, with frequent snows on the higher hill ranges. Between these hills lie sheltered forests and plantations, from which the greater part of Suthergold's population gets its food. Most of the population reside in the west, near the fertile banks of the White River Elwynn and the larger cities. A large gold deposit is mined in C.R. around which a thick forest is inhabited by decedents of the original Rathwood settlers.

Greenwinter forest is a protected forest and home to countless avian species as well as the feared vulture ant.

Suthergold is ruled by the Count's Court, on behalf of the Sovereign of Goldshire. The Count rules with the assistance of a County Charter, which stipulates the rights and responsibilities of Suthergoldians. Suthergold practices a rigorous ideological liberalism, with certain sections of the population granted special rights. Such groups as the Priesthood and the Sutherlanders enjoy near-total autonomy from the Count in Underwall and Sutherland (respectively). The Suthergoldian state frowns severely on lethal conflict, and has outlawed the use of lethal weapons. As a result its County Militia, the Suthergold Defender's League, practices entirely non-lethal methods.

The capital city, Kingsgate, has acted as the administrative capital of the former Barony of Hrykria, Duchy of Sutherlune, and Duchy of Asantelian (a reincarnation of Hrykria).

Suthergoldians, besides the doctrine of non-violence pressed into them from birth, have a polytheistic religious streak that is similar but not identical to Cedrism. This practice is called Suthra and is devoted chiefly to the Prophet Rathus of Rel and the deity Cortallia, the Goddess of Fate and Fortune. Cortallia is accompanied by a series of less known deities whose natures are far more akin to elemental energy beings than the ascended-mortal Cedrist gods, although strong similarities exist in respective pantheons' subject matter such as knowledge, life and power. This is, however, to be expected of most any polytheistic faith.

Suthergold's native sport, introduced by the Priesthood, is Dead Ringing - a gladiatorial sport which, despite its name, is as averse to death as any other aspect of Suthergodlian life and punishes death as its worst offence. Between this and the limited choice of weaponry used, participants are famed for the creativity by which they subdue their opponents.

As of the 62nd century ASC, Suthergold boasts a population of over 18 million making it the most populous county in mainland Goldshire and the third most populous in the Kingdom.