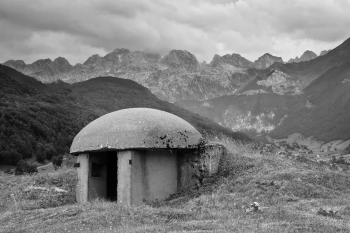 The Garden of Kalgachia is a territory located in the mountains of west-central Benacia. It was established by schismatics and heretics who survived the downfall of Minarboria and Lichbrook in the late 1640's. The population obstinately refused reintegration into the Imperial Republic and instead persists with its wrongheaded separatism. In spite of this, the Kalgachi have proved of benefit to Shirekeep - helping to turn the tide in Mishalan during the Struggle for the South and setting in motion a chain of events that contributed to the success of Auspicious Occasion in its peripheral western theatre.

The Kalagachi are believed to worship daemons, specifically archons, who are believed to be the guiding spirits or consciousness of their state and several of its attributes. In this they cleave close to the heresy that our reality exists only of fleeting phantasmic spectres set in motion by the unhinged whims of liberated super-egos. The Imperial Republic has encountered similar heresies originating from Raikoth and Passio-Corum; the Imperial Inquisition and the Vigiles Arcani must remain vigilant against the spread of such notions within the Imperial Republic. In spite of these gross heretical tendencies, the Kalgachi maintain a belief in the negative aspect of the Wastes of Irredeemable Corruption which broadly correlates towards a correct and healthy attitude towards Balgurd. For this reason the official guidance is that visiting Kalgachi traders and emissaries should not be summarily burnt so long as they do not proselytise.

Those who master the nostrums and arcane doctrines of the Kalgachi religion find themselves elevated to the Council of Perfecti, which ironically obliges them to live an underground troglodyte existence. The names, identities, even the species of these Perfecti remain largely unknown although persistent rumours suggest that the last surviving heir to the Yastrebs is foremost amongst their number. This could however be a myth as history is replete with legends of fallen kings who lie sleeping under a mountain awaiting the moment of their nation's greatest need in which to return. The Garden is governed by the Perfecti in accordance with the Oktavyan Code. It should however be noted that the Code permits the Perfecti to commit any crime or outrage so long as it advances the interests of the Garden.

It has been assessed that it would take seven days for the Imperial Forces to conquer the Kalgachi. Although this shrunken garden lacks the defence in depth that its Minarborian predecessor could manage, its positional defences are assessed as formidable and supported by small manoeuvre groups and partisan bands. An invasion force would nominally consist of III & IV Corps of the Frontier Army supported by Bomber Command, S.W.O.R.D. and the Corps of Auxiliaries. Projected casualty estimates run to 13% of initial forces deployed. More importantly however, up to 25% of gravimetric armoured vehicles deployed in theatre could potentially be rendered inoperable, either through vulnerability to Malus rockets or else due to the strains of field maintenance reliant upon uncertain supply lines. Additionally, even in the event of a successful coup de main against Kalgachi population centres, it has been speculated that guerrilla warfare could continue afterwards for months, possibly even years, spreading into the Green and possibly inspiring sympathetic revolts in Dietsland, Mishalan, Puritania, and Voltrue as well as amongst the Laqi of Malarboria. For this reason, the Collegium Magistri Militum considers the prospect of forcible incorporation to be "singularly ill-advised, verging on certifiable stupidity". In view of this further operational planning has been cancelled, although Operation Unpalatable remains formally listed on the books held in the Staff College.

Occasional skirmishes in the ungoverned spaces by scouts and contractors attempting to salvage artefacts from the wreckage of Minarboria's technologically advanced empire are denied, naturally, as a matter of routine by both the Garden and the Imperial Republic.

The Less Xenophobic Guide to Kalagachia