From ShireWiki
(Redirected from K'Tzuni)
Jump to: navigation, search

The Barony of K'Tzuni, is a barony within the Duchy of Brookshire, and consists of the Counties of Modan-lach, Lywind,Jugenskaja, Ž, and Crestfall Downs. It is currently ruled over by Maksym Hadjimehmetov who is also the Count of Modan Lach. The exact origin of the name K'Tzuni is unknown, although it may be an ancient Laqi word meaning 'land of the wealthy plains'.

K'Tzuni is a relatively small barony with a substantial sea coast and a large inland area of mountainous and steppe regions. Modan-lach is perhaps the wealthiest and most fertile of the counties, as much trade is conducted via sea routes. The Barony borders the Barony of Dolor to the north and east, and the Barony of Lakhesis to the west. No major rivers cross through the barony, the largest flowing through Brookshire Hamlet.

K'Tzuni is a relatively recent invention as barony, created under the reign of Kaiser Mors V. No territorial disputes exist, though it was considered that the archipelago of islands lying due south of Modan-Lach in the Shire Sea should have been made part of the new barony. This claim on what is Yardistan's land has since been revoked, and K'Tzuni remained a peaceful barony until the Kildare Rebellion, when its baron declared support for the Kaiser. During this time, K'Tzuni's forces supported Kaiser Mors V and their destruction of the Elwynn Sluice, causing the flooding and devastation of the rebel-held capital of Shirekeep, led to Hadjimehmetov declaring a state of emergency and founding the Provisional Free State of K'Tzuni, founded by him to ensure a non-rebel held stronghold for any legal successor to the throne to return to. The Declaration of patriotic and royalist succession was viewed by many with scrutiny as they saw it as an illegal act. T

K'Tzuni regained activity in late February 2008 after the Laschist Revival in which a populist government was installed in K'Tzuni.

The County of Ž was also created as a subdivision of K'Tzuni during this time, during which K'Tzuni became the host county of Brookshire's Ducal Legislative Body, the Great Kehl. 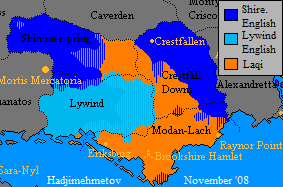