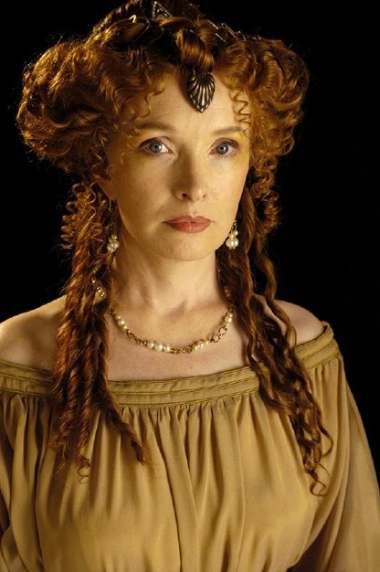 Lady Esther Maryam Amirdokhtar of the Houses of Ayreon-Kalirion and the Descendants of Freyja.

The Lady Esther Maryam Amirdokhtar of the Houses of Ayreon-Kalirion and the Descendants of Freyja (born 1565 in Huyenkula, died 1618 in Haraldsborg) was the sixth Emira of Sathrati (1598-1618) and a member of the Imperial Bloodline of Ayreon-Kalirion. She was the only daughter of Daniel Kalirion and Sara Rikjudottir Isammaður, and the elder sister of Elijah Ayreon.

Esther grew up in Hurmu, and decided, unlike what her brother later would do, not to take an active role in politics and royal duties. At the age of 7, Esther had to grow up much quicker than any child should have to. When her mother Sara gave birth to Esther's little brother Elijah, Sara died. Some consolation in the grief was the survival and health of little Elijah, with whom Esther forged a close relationship. She took on great care to protect Elijah from everything she saw as bad, and became a mother figure for him. In 1586, however, tragedy struck. Elijah had travelled to Shireroth with Uncle Eirik (Sara's brother), but due to the death of the uncle under mysterious circumstances in East Elwynn, the authorities there declared Elijah a ward of the duchy, and refused to send him either to his father in West Elwynn or to his sister in Hurmu. The separation from her brother caused Esther much anguish and heartache. She took her refuge to her studies at Kaupang University, where she had enrolled three years earlier to study Babkhi Language and Literature.

In 1586, her father Daniel was assassinated at Cape Farewell. Confusingly, his entire estate was left to Kaspar Soleimân. Esther "knew" that something wasn't right, and was later instrumental in discovering how Kaspar was the assailant, and the one faking Daniel's last will and testament.

The following year, Babkhan soldiers freed Elijah from his captivity in the outskirts of Vijayanagara, and took him to Elwynn where he was under the protection of Prince Nathan Dariolin (with whom he would marry later the same year). Upon hearing these news, Esther flew immediately to Elwynn to embrace her liberated now sixteen-year-old brother whom she had not seen for more than two years. The siblings rekindled their relationship, and stayed in close contact.

Despite Elijah's ascension to the Kaisership in 1588, Esther refused to get more involved in royal engagements and politics. Nonetheless, she took an interest in the events in Elwynn, and followed closely the Senate hostage crisis which ended with the death of her brother-in-law.

Esther's love for Babkhan culture had been instilled in her since a young child, but she had only visited the country once. Still, she considered herself Babkhi in many ways, and found pleasure in dressing as a Babkhi, and taking on some Babkhan courtly manners. In any case, Esther nurtured that cultural love, and progressed through her studies. In 1595, she was awarded a doctorate after defending her thesis entitled Magical realism in poetry of Rakesh Ackbar.

In late 1595 she was given a permanent position in the literature department of Kaupang University as a lecturer in Babkhi Literature. On the first end-of-year faculty meeting she met Merling Karlsson, a recent PhD graduate like herself. But that was where the academic similarities ended. Merling was a mathematician, and never read fiction, and Esther hated calculus and trigonometry with all her heart and mind. Yet, Merling and Esther found each other. Both were introverted in their personalities, and shared a cynic gallows sense of humour. They married in the spring of 1597, and continued their academic careers.

The marriage started off with much pain when Elijah in 1598 was crucified in Walstadt. Although Merling tried his best to support and comfort Esther, she fell into a mental breakdown. Despite her frail mental state, she continued to teach, as it was the only thing that kept her sane (she would say).

The couple never had plans to have children, though in 1602, she realised that she had become pregnant. Both Merling and Esther were unexpectedly happy and at ease by this news, and found comfort that despite all death in their family, new life would come. In early 1603, Mirza Jonathan Merlingsson was born. A week later, Jingdaoese troops invaded Hurmu and began a systematic killing of all people in the territory.

Esther and Merling took their child to a hidden refugee camp in the middle of the primeval forests in southern Hurmu. There they stayed for two days, planning for their trek through the forest into Stormark. However, their stay was cut short as Jingdaoese soldiers found the camp and ambushed it. In the chaos that followed, most people in the camp were brutally killed. Esther was separated from her husband and son, and hid with another woman, Lilja, underneath a car.

When on the following day, when the enemy troops had left, Esther and Lilja searched the scorched camp for survivors, they found three, and underneath the slaughtered body of her husband, she found her son Jonathan.

The group of five survivors walked slowly and quietly through the wild forest in a southern direction for several days. Food was scarce and sleep was hard, but after a while, the group was discovered by a Storish border agent. A day before they had unknowingly crossed into the Jarldom of Borgarrike, which is Storish territory.

The agent took care of the survivors and brought them to safety. Once in safety, Esther's mind cracked and she suffered from retrograde amnesia, meaning that she could not remember much at all prior to the massacre at the refugee camp. Jonathan was taken to a foster family, while Esther was admitted to a mental institution nearby.

Esther's recovery took several years. The first signs of recovery came in 1606, when she showed a greater concern for her son and told him stories from her childhood. Soon, Jonathan visited Esther more and more, and often stayed whole weekends at his mother's. In 1610, staff at the institution began suspecting that Esther was well-connected and had family abroad, and enlisted the help of Vilhjalm Kormak, former Senator of the Lakes and now Chairman of the Hurmu Congregations in Stormark as well as the Jarl of Borgarrike, to investigate.

In 1611, Kormak could confirm that Esther's newly recovered memories of her identity were true, but given the frail state of Esther's mind, the investigation was not made public until 1614.

By 1614, Esther was strong enough to begin work again. She reconnected with her nephew Nathaniel, then Emperor of the Natopians, and was by his special dispensation made Natopia's ambassador to Stormark. At that point, she organised an upcoming state visit by Emperor Nathaniel to Stormark.

At a state banquet held in honour of Emperor Nathaniel, Esther was introduced to Hallbjörn Haraldsson, son of High King Harald, a much younger man, being 26 years of age, compared to her own 50 years. Despite the age difference, instant attraction occurred, and the two lovebirds started planning, against all common sense and advice from officials, their marriage. In the end, the families of both Hallbjörn and Esther gave in, and allowed negotiations, in accordance with Hurmu tradition, to start. The matrimonial contract negotiations were conducted by Hallbjörn's twin sister Queen Æsileif of Ravaria and Esther's nephew Emperor Nathaniel of Natopia at a guest house situated at the Hurmu Ruins and Remains site called Hurhaeng in the Jarldom of Borgarrike.

In 1615, Hallbjörn and Esther were married in a lavish secular ceremony which take place at the ancient fortress of Harald's Holdfast in the Imperial City of Haraldsborg, the capital of the High Realm of Stormark. The ceremony was presided over by the High Justiciar of Stormark Her Royal Highness Unna of Skálavík of the House of Vanadís, Bloodroyal and Ærkejarla of Freyja's Necklace.

Against all prediction, the couple was happily married. They loved spending time with one another, and Hallbjörn's daughter Fjǫrleif, and Esther’s son Jonathan, got on well together. The family got bigger in 1616 when Esther gave birth to a set of twins, Thorstein Noah and Audun Joel.

Esther had been involved in oppressing slavery in the Longships Isles, and had become unpopular among slavetraders there. Before her bringing up the conditions of slavery there (despite the unlawfulness of it), de facto slavery was not uncommon in those islands. Her engagement in the question made her a target, and given how rich and well-connected some slave traders were, it was not unsurprising that they managed to have their agents enter Esther’s home one night in the winter of 1618 when Hallbjörn wasn’t there. At home that night, only Esther and Jonathan were sleeping, and one bodyguard, Jarl Andersson, was awake.

Jarl Andersson was the first victim, but Jonathan, having just awoken for being tired, found the body of Jarl Andersson and signalled for help, but it was too late. His mother, Esther, had been killed too.

The actual murderers were tried, found guilty and sentenced to death. They were executed by Fjǫrleif on the same ancient moot hill in the Jarldom of Gularike where she performed her first execution in 1615 when she was a nine-year-old girl. The actual instigators behind the murder are still at large.

A funeral was held in the Temple of the Lakes, at Haraldsborg, in accordance with the Temple's rites. She was survived by her husband, three sons and a stepdaughter.

Quotes by the Lady Esther

Who is that stunningly beautiful young man heading my way?

- Lady Esther to her nephew, Emperor Nathaniel of the Natopians, during the state banquet at the Vanadísarhall where she met her second husband in the year 1614.

The Ash and Elm are important symbolic trees for Hurmudans. In our mythology, the humans came from the holy lakes, but were nourished by these two trees, grew strong and conquered the world. That's why we call all humans "children of Ash and Elm". It's to remind us that nature is our nourisher, like a mother or father, and not our slave.

- Lady Esther explaining to Lady Sigrdrífa the Priestess of the House of Vanadís, who is the Yfirstormarksgythia and High Priestess of the Thingeyri Temple, the whys and wherefores of the Bosom Trees of the Godsgrove of the Temple of the Lakes, at Haraldsborg.