Born in Azshara in the year 1574, Dâniyal Umra Suleiman Simrâni-Kâlirion ibn al-Majeed bin Sathrati is the son born out of wedlock of Daniel Kalirion, nephew and namesake of Prince Daniel Qioon-Audonoi, who once sought refuge with the House of Simrâni in the Ribat al-Eluinshahr of East Elwynn. He is only true biological heir to the Principality as all other branches of the Kalirion Line perished in the Babkhan Apocalypse or else lapsed into the degeneracy that precluded biological heirs.

On appeal to the Elwmoot and the Court of Chivalry in East Elwynn he was legitimised in 1591 and thus took his place as the Patron of the House of Kalir. This title passed to his daughter, Isabella, upon his death from hemlock poisoning in the Elw year 1631.

Growing up in East Elwynn under the tutelage of the Raikothlin and the protection of the powerful Simrâni Clan Daniel learned to appreciate the value of a harmonious order in society where every person knows their correct place, is well trained and suited for it, and all work together without complaint in pursuit of the common good of the whole community. There are those who maintain that his privileged position as the son of a politically favoured defector from West Elwynn insulated Daniel from the harsh realities of everyday life for the common Elw under Lord Âlaion in the Feudal East. Even if this were true it would not have altered his disgust and dismay at the unending cycle of violence in the Democratic West where his relatives one by one succumbed to Babkhan Plotting and the Natopian Vice.

Prelude to the Coup

As the civil war in Elwynn ground on even past the point of the Union State's reabsorbtion into the Imperial Republic of Shireroth the Dark Orchid Society approached Daniel in order to prepare him for the likelihood that the three-way conflict between the Osmani / Merrick, Ayreon and Loki factions would hollow out the political leadership of the state.

With the failure of General Merrick's Coup and the collapse of the Osmani Faction into despair being followed closely by the installation of Nathaniel Utas as a puppet prince by the Isurui Conspiracy it finally became apparent that the moment had come for the Descend on Eliria to Restore Order to the State.

Using the experienced smugglers of the Simrâni Clan as intermediaries Daniel arranged for money and arms to be smuggled south to Dr Tokaray al-Osman, the last surviving member of the Osmanid Faction who had installed himself in the city of Timothea, Goldshire, in late 1604. Although formerly a practising Psychiatrist of the Ardashirshahr Psychiatric Hospital Dr al-Osman was able to exploit old family contacts and the chaos of the War in Shirekeep to begin hiring Dromosker Mercenaries and purchasing grain barges for conversion into rocket launching platforms.

On 1 Amnure, Elroqpinu 1605 the coup plotters struck. Sailing upriver from Timothea the riverine flotilla of barges assembled by Dr al-Osman launched a surprise rocket barrage against the Bailiwick of Mariyechelân which set the city aflame and under the cover a rolling fog-bank dispatched Dromosker war canoes to the western bank of the East Elwynn River to swarm into the town and to butcher and cannibalise the defenders. However there was no resistance and the disappointed Dromosker resorted to indiscriminate rape and plunder instead.

With the Battle Groups of the UDF already deeply embroiled in the battle for Shirekeep the General Staff, still packed with Einhornsson and Osmani appointees, confronted the Steward Isurui and prevailed upon her to accede to the demands of the incoming Government to resign her offices and immediately flee for the Outer Rim, which she did only to vanish in mysterious circumstances. 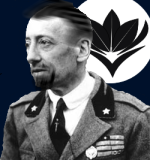 The Government established by the new Conducător has been more left wing than many expected, signalling that the Osmanid Faction, in spite of supporting the Coup and gaining the Stewardship as reward, is not in the ascendency. The ideology of 'Post-Ayreonism' has manifested itself in many forms, the Guild-Corporatism that underpins the provincial reorganisation from Counties into Bailiwicks coordinated by Wardens of the Marches, progressive reconstruction policies for the Southern Bailiwicks afflicted by war and blight, and the sudden abandonment of the Erb in favour of Social Credits.

The new regime left its mark upon Elwynn although it did not endure for as long as Daniel hoped.

Daniel had two wives, Esmeralda Erinamor (24) and Fatima al-Osman (19) and one Catamite, Jodocus Badius (18), who also serves as a secretary and bodyguard. He had three daughters Isabella and Miranda by Esmeralda and Noor Bint by Fatima. He contemplated taking a third wife or concubine if in order to produce a male heir in sufficient time. However he was deposed before his dynastic ambitions could be fulfilled.