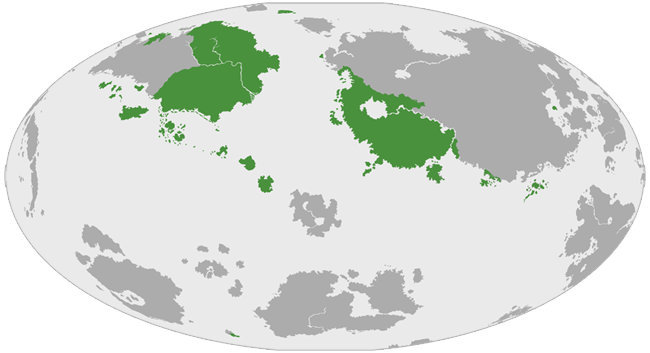 The Imperial Republic of Shireroth, or simply Shireroth (Istvanistani: ['ʃaɪɻ.ɻɑθ]; Elw: Xiroo); is a Federal Commonwealth founded in bN 1214 by Kaiser Raynor I as an absolutist feudal monarchy. It is particularly old. Over the years the nation has fluctuated wildly in wealth and territorial extent, but it has endured in large part because of its core territories in eastern Benacia. The Imperial Republic remained essentially feudal in nature throughout the entirety of its existence, which its supporters claim has allowed it to survive all these centuries. Following a brief period of Elwynnese independence, and the more enduring loss of Kildare, the core duchies of Shireroth morphed into Imperial States with a high degree of autonomy and constitutional protection. However, in spite of increased devolution, the franchise remains restricted to the ranks of the nobility. The Imperial Republic is a culturally diverse empire, its sprawling domains, which cover two thirds of Benacia, contributing to a vast array of people and traditions.

The Imperial Judex serves as the Judicial system for Shireoth. It allows citizens to address grievances either amongst each other or with the laws. Cases are judged by the Arbiter. There is no jury.

Constitutional crises, as well as the occasional criminal trial, get referred to Shireroth's sole court, the Judex. The Arbiter of the Judex is charged with interpreting the Charter, the Lawbooks, and the Imperial Decrees. However, the Kaiser outranks the Arbiter and can fire zir or use imperial decrees to avoid the effects of zir decision. The only case in which the Arbiter has power beyond the Kaiser's is that both Kaiser and Arbiter must mutually agree on any changes to Shireroth's Charter.

Shireroth is unusually isolationist for a micronation, but nevertheless has several productive foreign relationships. It even joined the Bastion Union, a forum sharing project between several nations.

Shireroth is the founding member of the Micronational Cartography Society (MCS), which links thirty six nations, mostly English-speaking but also Dutch and Polish, together on a single map. Shireroth is a strong partisan of the Society and fiercely defended it during its conflicts with other cartography societies like the Geographical Standards Organization. Some accused Shireroth of dominating the society, which was once plausible when most of its top positions were held by Shirerithians. However, today only one of five MCS Council Members is Shirerithian, and most nations have stopped complaining about Shirerithian influence even though it holds much more Micras territory than any other country.

In the past, Shireroth frequently entered into agreements to annex other countries. For many struggling nations, Shirerithian annexation was attractive both because Shireroth had a good track record of surviving and because its feudal system made it easy for countries that joined it to keep their own land. During its history, Shireroth has directly annexed Apollonia, Cimmeria, Hyperborea, Jaris, Akerbjorn, South Mondesia, Cognito, Lac Glacei, Arminy, Antica (dinarchy), Comstokia, and Hurmu (among others).

Shireroth had a very long history of interaction with Babkha, culminating in the Mango-Camel Pact of 2003 which allied the two countries. After a falling-out, Babkha and subsequently the Grand Commonwealth it created became Shireroth's chief rival. This enmity lessened when popular Babkhan Hesam Jahandar won the throne of Shireroth, but flared up again with the revelation that he was under the control of Babkhan interests. Though the line "May we slay all treacherous Babkhans" was added to an unofficial version of the Shireroth anthem, after Babkha closed shop as a micronation Shireroth mostly agreed to let bygones be bygones. Recently, Babkhan-Shirerithian relations received a boost when former Babkhan Ardashir Osmani attained the throne of Shireroth.

The living micronation with which Shireroth most often interacts is Antica. Shireroth had a very warm relationship with the Dinarchy of Antica, but when it was overthrown by revolutionaries, Shireroth's relationship with its successor state, the Republic of Antica, started off on the wrong foot and has stayed there ever since. Shireroth, which allied with the defeated Dinarchy, fought the Republic for control of Antican territory. Although it won control of the territory, political factors later forced it to give most of it up to the Republic; this incident caused enmity which has persisted ever since. However, with the departures of prominent anti-Shirerithian Anticans Olorix and Steven, the Antica-Shireroth rivalry has recently turned into more of a friendly competition than bitter hatred, with only a few holdouts like Ben Kern still causing trouble. Many Anticans, especially Chris Mules, are respected by Shirerithians and welcome in Shirerithian territory, while a few Shirerithians, such as Scott Alexander, head to Antica for their macronational political arguments.

Shireroth is the subject of several works of art and literature. Most notably, it gets a mention in Harvey Steffke's Control of Destiny series of computer role-playing games, in which several Shirerithians are prominent characters. A few other Shirerithians are involved in programming projects in one way or another, including Jonas Windsor (who is working on a game about Shireroth's Duchy of Kildare), Erik Mortis (who wrote the Small Commonwealth Bank), and James Raine, who created the ShireFox modification for Firefox to allow easier access to Shireroth's internet presence.

The novel Unaimed Arrow takes place in Shireroth, as do several shorter works of fiction. Notable among these are the Elwynnese story threads pioneered by Andrew Allot and his friends, the poetry of Philip Locke, and the Lac Glacei and Mirioth story arcs in Yardistan.

Shireroth state cult, and de-facto state religion is Cedrism. Its polytheistic belief system is based around Mors, the God of Death, and his ex-wife Viviantiana, the Goddess of Life. Worship tends to involve sacrificing citrus fruits, mixed with offal and the setting off of explosions, which in turn gave rise to a sub-sect known as the Cult of the Sacred Detonation. Cedrism also shares some gnostic beliefs like reincarnation and enlightenment.

Major Cedrist gods include Anandja, Goddess of Bliss, Lumina, Goddess of Light, Ifni, Goddess of Luck, and Sakat, God of Time. Minor deities such as Mog, God of Political Blunders, and B'caw, God of Spicy Chicken, have historically been tolerated but are now being gradually demoted and expunged under the influence of the Holodomatic School and its focus on the veneration of the Highest Divinity.

One of the more infamous objects of popular veneration, Malarbor, is in fact a demonically possessed tree which has been bound to Shirekeep - the legend has it that so long as Malarbor remains rooted in the soil, Raynor's Keep will continue to stand and the Imperial Republic will never fall. The ancient tree has been the subject of numerous arson attempts over the centuries. Malarbor became, inexplicably, associated with the Imperial Republic's propaganda efforts over many years, and has become the country's unofficial mascot and ambassador of ill-will. Malarbor's catch phrase, insofar as a daemon can have catchphrases, is "MALARBOR DEMANDS IT!"

Other features of Cedrism include the Demon (occasionally Deamon) Fish of Balgurd, the archdemon Rrakanychan, and the legendary Sword of Vengeance, symbol of the Kaiser's might (but arguably pilfered by the Babkhans a while back).

The economy is divided between the noble houses, Imperial Government, the Imperial States, and a collection of corporations that operate across numerous sectors.

The primary interest of the Imperial Republic is in extracting revenue from the Imperial Dominions by both direct and indirect taxation overseen by the Office of Bounties and Factorage as well as voluntary contributions levied from the autonomous Imperial States of Elwynn, Goldshire, Kezan, and Malarboria.