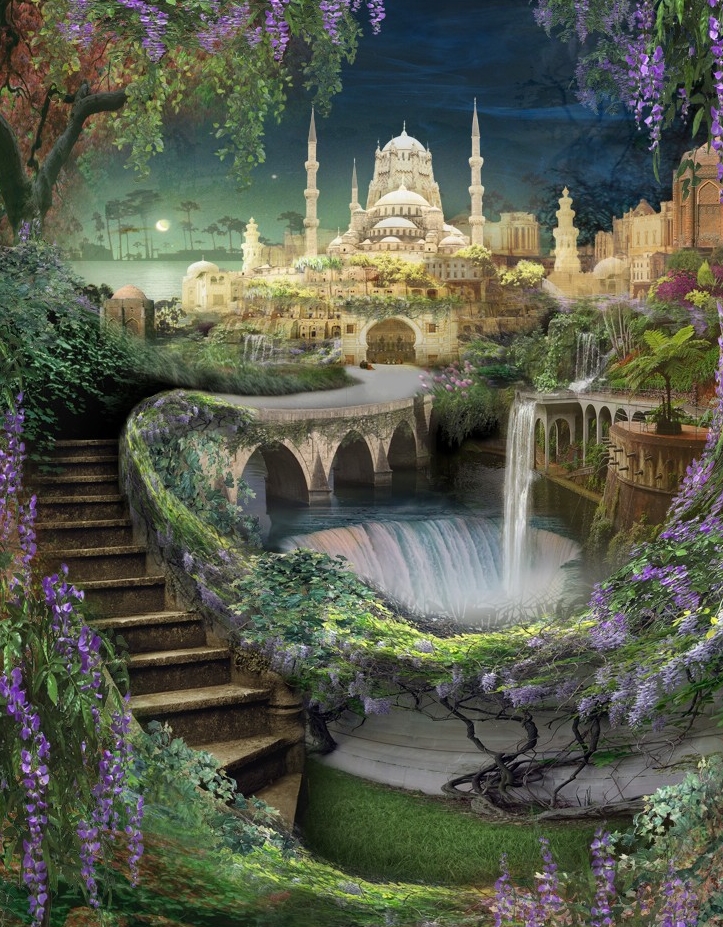 The Temple of Phantoms.

The Temple of Phantoms, also known as Hjemsøkttemplet and Soloralistsgröf, which means "haunted temple" and "Soloralists' tomb" in the Froyalanish and Wintergleamish languages, is the site of a ruined temple of the Froyalanish Ancient Ways. The temple complex is situated in the Bandar-e Osman area of the Royal City of Ardashirshahr. It was the southernmost of the Thirteen Temples of Eluin.

The temple derives its name from the ghosts of clerics of a razed-down Soloralist temple - over which the Temple of Phantoms has been built - who are said to haunt the temple complex. The clerics were massacred by Babkhan mercenaries during the days of the Elfinshi War.

As regards seniority among the temples of the Froyalanish Ancient Ways, the Temple of Phantoms holds the fifth spot, and its High Priestess a corresponding rank among the Hjartardýrlafðir. The temple is only outranked by the White Orchid Temple, the Shrine of the Sea, the Shrine of the Wicked Garden, and the Mackerel Temple. The High Priestess of the Temple of Phantoms has been assigned a place accordingly in the Order of Precedence by the Royal Household and Heritage of the White Orchid Throne. The Hjemsøkttemplet has been built in accordance with the local Babkhi building style.

The Temple of Phantoms was founded during the Ducal Reign of Harald of Froyalan as the Vanic Temple at Ardashirshahr by a Ducal Charter issued by the aforesaid Lord of the White Orchid Throne. A very short while after its legal establishment the Jólaslafðir decreed by means of a Gyllmára Búlla that the High Priestess of the Vanic Temple in Ardashirshahr would in perpetuity be part of the Deer Ladies. Through the self-same decree the aforesaid Yule Ladies also made a substantial financial donation toward the construction of the temple.

The prospective High Priestess of the Vanic Temple at Ardashirshahr, Lady Kolgrima Gislisdottir of the House of Kaupsted, was dispatched to Ardashirshahr. with what at the time seemed a mission impossible: find a prime location in the heart of the metropolis close to the River Elwynn large enough for a Vanic temple complex. Lady Kolgrima, however, did her research well. She employed her contacts in the SEKEF - especially those in the Pale of Angularis for they did a lot of business with Ardashirshahr and therefore had excellent knowledge about the city. That way she came accross what seemed quite the anomaly: a huge empty plot of land on the bank of the River Elwynn in Bandar-e Osman area. In the Common Tongue the area is called the Harbour of Osman and are the riverside dockyards of Ardashirshahr.

From further inquiries Lady Kolgrima learned that prior to the Elfinshi War the site was the location of a Soloralist temple complex, but nowadays there were only scant remains of that temple to be found after it had been razed down by the Babkhan mercenaries settled in the area by Baron Ardashir. Subsequently the site was used for warehousing, which was wiped away in a devastating flood caused by the breaching of the recently built West Elwynn Dam, after a bombardment launched from the Barony of Amity and Mirioth during in the War of the Wylthean Succession. After the waters of the deluge had receded, the area remained a wasteland into the Reign of Duke Harald.

Using the powers afforded to her by Duke Harald's Charter, the Lady Kolgrima claimed the site for the Vanic Temple at Ardashirshahr and commenced with the construction of the temple complex. Not too long later the temple was ready to be dedicated, which occured in an extravagant ceremony attended by Duke Harald, the Hjartardýrlafðir, the Jólaslafðir, and many a prominent Elwynnese citizen. The ceremony itself was surrounded by various lavish festivities, including balls, banquets, and processions.

At one such an event the Jólaslafðir learned of the tales of the temple site being haunted by ghosts of clerics of the destroyed Soloralist temple, which they found quite amusing. To the joyful appreciation of the other guests the Yule Ladies decreed at the spot that the temple would from that day forth be known as the Temple of Phantoms. The aforesaid spontaneous decree was later at a session of the Jólaslafðir at the Thingeyri Temple confirmed by Gyllmára Búlla.

In the year 1652, the temple complex was torn down by a rioting mob of Babkhi, fired up by their Mobads who claimed that the site had once been home to a dar-e mehr (fire temple) during the reign of Baron Ardashir. The Vanic Priesthood had already either fled or been dispatched to Dragonsfold in the preceding year, but there were nonetheless four deaths among the 9,000+ strong mob of protesters as the Cudgellers escorted the site's remaining attendants and gatekeepers to safety.

Following the destruction of the Temple, the site was purified with water and fire, before re-dedication to Zurvan.