From ShireWiki
(Redirected from Duchy of Goldshire)
Jump to: navigation, search

The Kingdom of Goldshire is one of Shireroth's two founding Duchies, and is its oldest named territory. Despite being demoted or dissolved numerous times throughout Shirerithian history, it survives to the present day, becoming ever more notable for holding onto certain ancient beliefs and building intentionally confounding infrastructure in a paranoid effort to dissuade invasion.

Goldshire has been a thoroughfare and battleground for competing neighbors for most of its history, beginning with an ancient tussle between the Treesians and the Khaz Modani for control of its coastline, themselves in competition with natives (reported variously as fairies, elves, and other pseudohumans) from the Goldshirian interior. From this struggle, the Treesians eventually prevailed and established the first effective rule across the whole of Goldshire. Their dominance was short-lived, however, as their success attracted the eyes of Raynor, Duke of Brookshire, who set about incoporating Goldshire into his own realm by force. At this he was eventually sucessful, establishing a united realm of Brookshire and Goldshire called Shireroth, with himself at its head as Raynor I. He remained in Goldshire for a time, directing his armies in the entrenchment of his rule despite a rude interruption from the Legions of Balgurd under Rrakanychan, who Raynor legendarily subdued and enslaved to his cause. This entire foundational period of Goldshirian history can be appreciated fully in the writings of Duke Wintersong, named The Five Woes of Ynnraile. 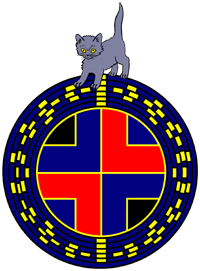 Old Seal of the Duchy of Goldshire.

Under Shirerithian rule Goldshire has played host to various outsiders' wars, a disproportional amount of them involving the forces of Babkha or Babkhi rulers of Elwynn, who seemed to favour Goldshire's open and relatively featureless terrain as a strategic corridor in both the attack and defence of Shirekeep. Between these episodic interventions and absorptions into neighbouring territories (most often Brookshire) Goldshire nonetheless exhibited an intermittent shine under certain eminent rulers. Duchess Jadie codified much of the Goldshirian aesthetic and culture, alongside Duke Erutirn who established Goldshire's first full-time professional military. Baron Wintersong of Ynnraile (later Duke of all Goldshire) gave perhaps more than any other to the artistic and social growth of Goldshire, by way of his record-keeping and storytelling. Duke Aryeztur Mejorkhor, while ushering an era of nigh-on genocidal cultural alteration (later diverted to Aryasht) that isn't much talked about and was mostly reverted, nonetheless made lasting contributions such as the expansion of the Goldshire Palace and the development of Goldshire's half of the River Elwynn Delta. The Dukes Wythe were the fathers of Goldshirian academia, founding the University of Goldshire in Wendor. Duke Harvey, being in charge of Goldshire more than once, has also done stuff too minor to name but too important to ignore. The Dukes Yastreb (Krasniy and Ryabin), a clan of mild slavic extraction and some Treesian descent whose tenures had mostly been focused on developing the institutions of Goldshirian state and putting an end to the Duchy's history as a mere carpeted floor for passing megalomaniacs. Ryker Everstone a Count-turned-Duke-turned-Grand Duke-turned-King who jumps in and out of Goldshirean politics like it's a cold swimming pool. Grand Duchess Kizzy Drakland, who began reforms that would help cement the state's image as a regional power. And Queen Noor, who saw Goldshire through its civil war and laid the groundwork for Goldshire to build many of it's outdated features anew.

It should be noted that record taking (let alone keeping) could rarely be called one of Goldshire's strong points. More recent efforts to collect and organize what records do exist have been met with varying degrees of success with one such effort being the "The Grand Timeline of Goldshirian History".[1]

Goldshire is separated by the River Elwynn from most of Benacia, and comprises the entire Eastern (aka Western, for some hidden reason of tradition unsolved by this author) coast of that continent. This easy access to riverine and oceanic waters has placed Goldshire in a natural position as a mercantile hub, aided by its substantial natural gold deposits and resultant specialism in the field of currency and bullion. Goldshire is divided into five Counties administered along feudal lines: Elsyran, a federation comprised of Ran, Elsenar, and Syrelwynn and hosts the state capitol of Goldshire Hamlet; Ynnraile a backwater county filled with crime and demons turned military juggernaut filled with crime and slightly less demons; Lunaris, the oldest subdivision of Goldshire and a cherished artistic paradise; Suthergold, a once barren and ignored land which has grown into a peaceful society powered by steam and the arcane; and Wintergleam, a county that ran away from home for about a century to "find itself" whatever that means.

Most Goldshirian settlements are villages or small towns, with the exception of a few large Western (Eastern?) cities such as Goldshire Hamlet, Kingsgate, Cortallia-Rathwood, Demonsfall, and Mesior. The topography is largely rolling temperate hill country, flattening to bocage plains in the southeast. 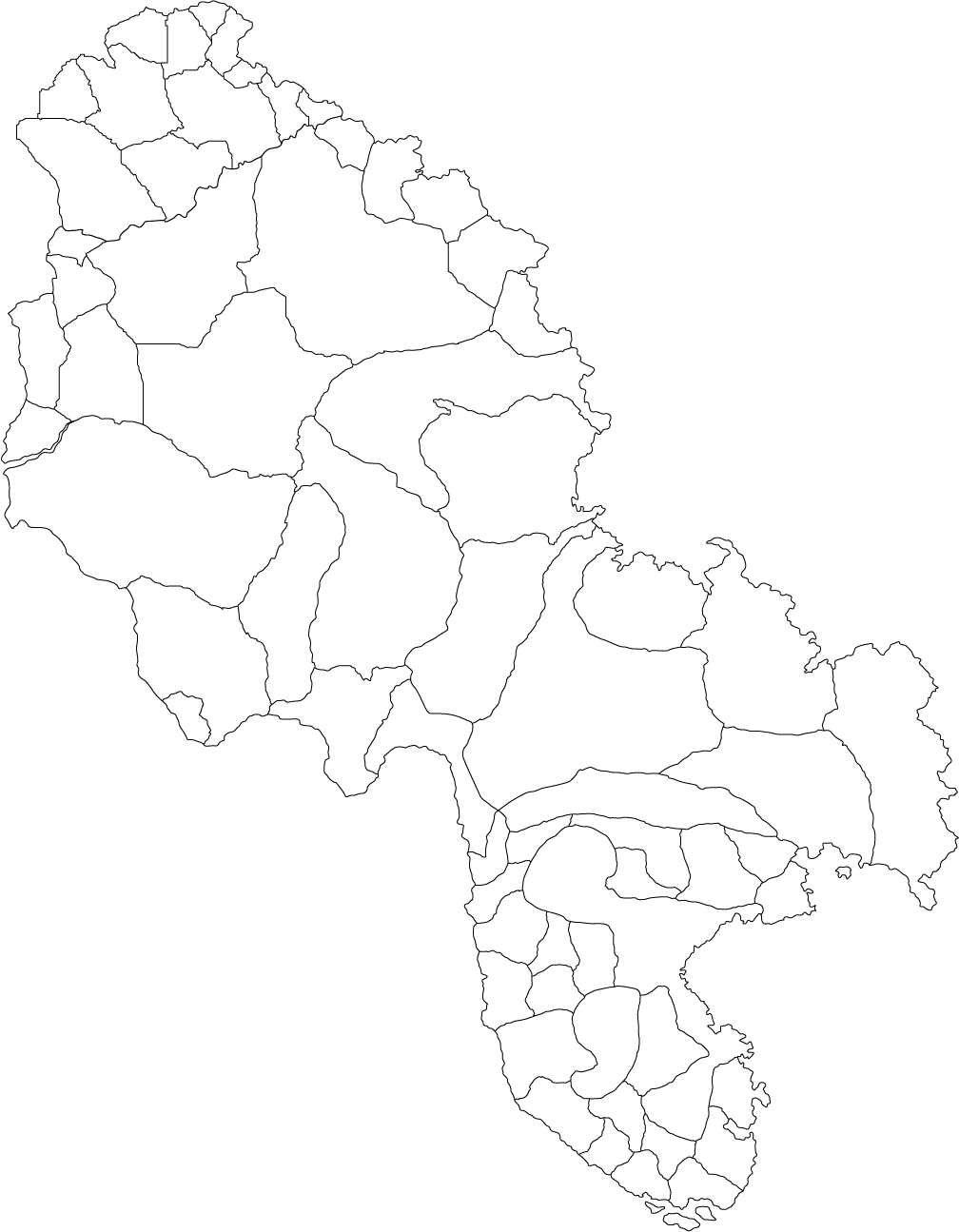 The provincial map of continental Goldshire as it was in the year 1652 AN .

Goldshire is ruled by the Sovereign with absolute authority. More practically, the ruling monarch assigns the routine governance of portions of the Kingdom to the Counts who may be appointed by the crown. The government concerns itself with the Kingdom's strategic direction, the running of the High Council and liaison with the Shirerithian Imperial government. The largest single institution is the military, which although farmed out to the County Militias in large parts remains combined within a single command structure. Intelligence for the ruling King or Queen is gathered by a secretive organisation called the Assayers, a relic of the ancient Mercaja dynasty operating nominally as a supervisory office of the Avakair Mint and Bullion Depository. Unfortunately the Assayers are irreverent toward all power including the sovereign, and operate entirely unregulated under their own agenda. Their relationship to the King or Queen of the day is thus complicated and at times downright unreliable, and all attempts to bring them into line have resulted in unfortunate 'consequences' for those involved.

Statute law in Goldshire is written either by Decree or added to the Codex Aureus, Goldshire's unified statute established by Duke Wintersong. While the power to create or amend said statutes resides solely with the sovereign, it is traditionally done so with the High Council and the reception of petitioners.

The ESB-Jörmungandr Group of Teldrin received a warrant from Queen Noor authorising the company to begin taking on many of the routine and mundane functions of government on behalf of the Throne, whilst the Royal Iron Company received a warrant to conduct mining operations in Amity, Elsenar and Ynnraile and permission to export the extracted raw materials via the cities of Chryste, Erudition and New Harbor, subject to the payment of appropriate tariffs to the Imperial and Royal Governments. With the descent of the Kingdom into civil war, the RIC began to interpret this warrant as granting rights of governance over the designated export ports; a presumption that the warring factions would be unlikely to tolerate, had they not more immediate and pressing concerns.

The ESB-Jörmungandr Group steadily accrued power within the Royal Government to the point when in 1637 it received the powers of the office of the Chancellor to hold in commission on behalf of the crown. This, together with an increase in the Elw-Babkhi influence within the Kingdom led to an eventual, perhaps inevitable, showdown with the Assayers - the notoriously secretive Chamber of Assay for the Avakair Mint which had evolved over the centuries into an increasingly rogue freelance intelligence agency with occult pretensions. The Assayers took the part of the nativist sentiment of indigenous Goldshirians, indignant at the daily increasing Babkhano-Elw domination of their ancient homeland, the last bastion of true Cedrism in all of Shireroth. Thus it was that, in the crisis that ensued after the assassination of two royal princes, the sons of Queen Noor, the Royal Government lashed out at the Assayers, including them amongst the general proscription of disloyal and suspect individuals and agencies. Inevitably the Assayers were forced, for the first time in their history, into open revolt, and a state of Martial Law was declared, plunging Goldshire into turmoil.

In 1639/6230 Goldshire was divided into three zones, the ESB Zone administered directly by the company reporting to the Royal Government, the Feudal Zone where existing lords rendered obedience to the Khan of Cabbagefall, and the two Military Zones (North and South) directly controlled by the Imperial Forces dispatched to assist the Royal Government.

The first phase of open civil war lasted until the latter half of 1640 and the fall of Goldshire Hamlet to mutinous troops in 1640, after which point the Kingdom fragmented into three warring states 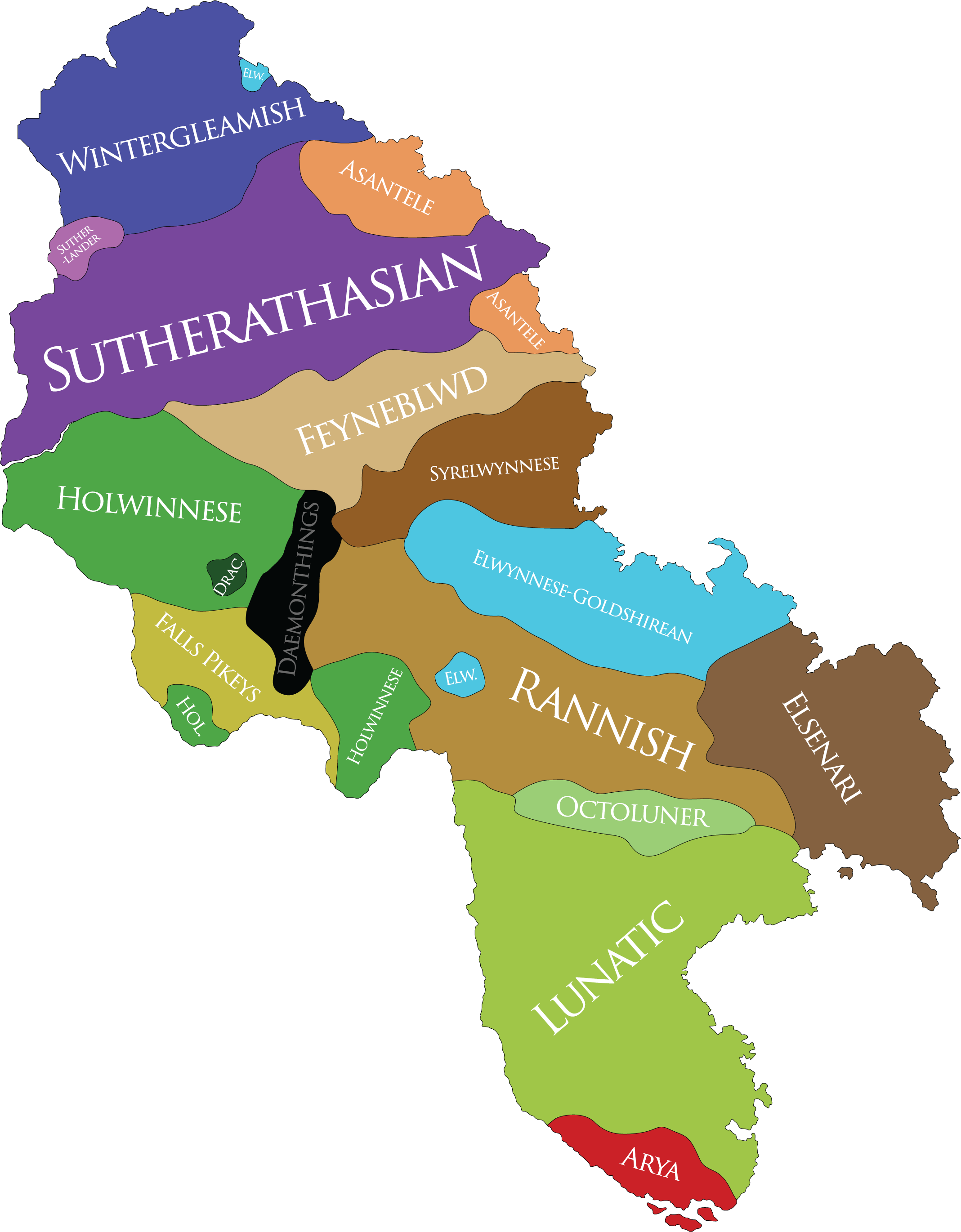 Ethnographic map of continental Goldshire as it was in the year 1653 AN .

Goldshirian culture, if such a unified thing can be said to exist, is largely agrarian laced with a mild to moderate mysticism. This paves the way for the Treesian, slightly oriental but thoroughly Cedrist manner of much of central Goldshire, giving way to more localized quirks and customs in the far reaches of Lunaris and Suthergold. The creative and aesthetic virtues are, at least ostensibly, more prominently valued in Goldshire than in some other parts of the Imperial Republic, or at least so it is alleged.

While Goldshire traditionally had a well-developed noble class, the welfare of the common citizen is of chief concern: the fate of the common folk is said to be the fate of the Imperial State. A high degree of autonomy was assigned to the Counties where it could be applied more relevantly to the population, and the Goldshirian military was a strictly feudal arrangement comprised of a small professional elite leading a massive swathe of irregular militias. Much of this arrangement however was swept away in the civil war, with power slipping from the Royal Government, the nobility and the counties into the hands of militia groups backing, however tenuously, the respective claims of either the House of Merjaca or the House of Ayreon-Kalirion to the throne. After the dust settled, King Ryker revamped the military and placed himself in a position of more centralized authority, particularly following his purge of Goldshire's lesser nobility.

One effect of the conflict has however been to galvanise the sense of a Goldshire nationhood, imperiled by the perfidious Elw from the north, and to revive the Cedrist faith that had, otherwise, come to be increasingly marginalized in the modern era. Ironically the Treesianoid House of Merjaca has been obliged to embrace Cedrism in the cause of resisting an Elwynnese dynasty whose faith was steeped in the traditions of Treesian religion.

Since the end of the Warring States Period and particularly following the draft beginning in the War of Lost Brothers, Goldshire has undergone a transformation into a more martial culture focused on protecting the Kingdom from Storish and Jing influences as well as creating a sort of mandatory education system in the for of military training. This rapid and penetrating force of military training has caused unique cultural shifts in the younger generations of the Kingdom, with prime examples being found in language and fashion which have both adopted and modified various militaristic elements.