Erudition is a city and major port in Amity, Jadid Khaz Modan. It served as an entropôt for the Royal Iron Company and was one of the three cities where the grant of a distribution port by royal warrant of Queen Noor of Goldshire was interpreted by the Company as constituting a grant of the city, together with the cities of Chryste and New Harbor.

In the past, Erudition has been the capital of Amity. During this time, Yardistan was considered the epitomy of Shirithian culture. In recent years 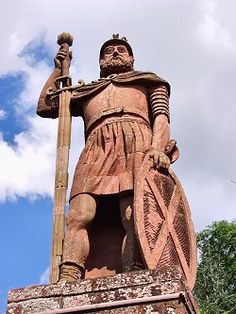 The Colossus is one of the major sights of Erudition.

however, Yardistan's glory has faded and as such, Yardistan has been a province of Goldshire since the early 17th century AN. This had a profound effect on the city of Erudition. The establishment of an Iron Company port has had a positive effect on the city, which now is getting back some of its old glory.

One of the most impressive sights in the city is the Colossus, a massive statue that stands on Erik's Hill overlooking the harbour. The statue is said to represent the ancient warrior king Erud the Great, who is the legendary founder of the city.

In the last days of 1662, the governor of Erudition and the Iron Militia garrison received orders from the Prince of Modan and the Archon of Jadid Khaz Modan to surrender the keys of the city to the Archon, Isabella Simrani-Kalirion. It had been discovered that the apparatus of RIC government in the city far exceeded that granted by the Royal Warrant of Queen Noor for the purposes of an export monopoly. Four regiments of Modani militia were dispatched to enforce the surrender.