The Emirate of Jadid Khaz Modan is an Imperial Dominion of Shireroth, formed in the wake of the Civil War in Goldshire and retroceded to the Golden Mango Throne by King Ryker of Goldshire in the year 1650. The territory comprises of the islands of Amity, Mirioth, So-Sara and Yardistan and follows Babkhan customary law and the precepts of the Harmonious Society.

Remarks culled from SHITT goes here.
Disdainful comments about the YAC goes here
An exaggerated account of the repeated Babkhan attacks on Amity goes here
Subsequent history of neglect including the workers paradise created by a rogue Verion goes here.

The Emirate was established in 1636 when the ESB-Jörmungandr Group installed the defeated House of Osman under Tokaray al-Osman as client rulers. Tokaray, who had been forced to work for the Elwynnese during the anti-Froyalanish revolt, was instructed to hold the isles in a state of terror and prevent their rising to join the mainland kingdom in throwing out the hated House of Ayreon-Kalirion. The ruthless efficiency with which this was carried out encouraged Thorgils Tarjeisson, first as Minister of Military Affairs and later as Kaiser, to trust Tokaray with greater responsibilities, including command of the feared Crypteia secret police. This trust proved to be misplaced and saw Thorgils overthrown and murdered in the Oustfest Massacre.

The isles saw some limited fighting during the Year of the Four Kaisers but remained ambiguously neutral for the most part after Isabella Simrani-Kalirion betrayed her husband Tokaray and unleashed the air power of the Natopian Defense Force on the rebel positions around Shirekeep.

With the subsequent disappearance of Tokaray and Isabella's continued absence in Natopia, the children of Tokaray by both of the Simrani sisters were left in the care of Miranda Simrani-Kalirion.

With them lies the ultimate control of the House of Osman and the possession of the isles, which it took and continued to hold at the end of the civil wars on the mainland.

Alissa al-Osman, the dowager Countess of Cimmeria, disapproved of the lax morality of Miranda, who has turned her husband's court into her own salon and brothel, and fears that she will be as likely to whore the children as to raise them in the Babkhan manner.

Unwilling to see the next generation of Osmanids wasted by debauchery and luxury, Alissa became, by the year 1646 AN, determined to take possession of the regency of Jadid Khaz Modan for herself.

In her favour, she had recourse, via her son Ludovic Verion, to the resources of the Iron Company trading station at Erudition. Her son meanwile is blockaded on the island of Blackstone by the Imperial Navy of Shireroth for his part in the Oustfest Massacre.

The Steward of the Imperial Republic, Daniyal Dravot - an ESB man to his core - has married Liv Djupvik, the Khanum of Cabbagefall, and established Imperial garrisons throughout the mainland kingdom. Although Dravot's ancestors, commoners of Mondesian Inglizi origins, rose in the service of the House of Osman, his heart is set upon its destruction so as to avenge the death of his friend and colleague, the late Kaiser Dominus, who as Thorgils Tarjeisson was the co-founder, along with Dravot and Ernst Cryptsinger, of the ESB Group. Only Isabella's good standing with Shireroth's indispensable Natopian allies has prevented a swift and overwhelming attack on the isles by the Imperial Forces.

The Imperial Republic meanwhile, along with the ESB Group, remains in a precarious financial situation with expenditures, particularly on defence in the face of an assertive Jingdao, that far exceed revenues. In consequence of which it looks to the trade and the resources of the siles as a way to obtain guarantees of colateral for the forthcoming bond issues intended to cover the forthcoming 1647 programme of defence spending.

In the midst of this, Isabella Simrani-Kalirion considers the House of Osman along with the isles, to be mere stepping stones to here ultimate ambition, the restoration of Simrani-Kalirion rule in Elwynn. To that end she had arranged the double marriage alliance with Tokaray so that her son, whom she had cloned from her murdered father, would marry Tokaray's daughter by Miranda, Azardokht al-Osman. The fly in the ointment of this plan however was that Azardokht was abandoned in Elwynn during the Year of the Four Kaisers and subsequently became the ward, effectively the prisoner, of the Arandur of Alalehzamin and Utasia, the Steward himself, who subsequently transferred her, along with Lord Adam's infant son, to Shirekeep and confinement in the Steward's Tower under the care of a governess not overly given to sentimentality.

The peace in the isles therefore was of a decidedly temporary and precarious nature.

The Great Daemon Scare of 1647–1650 put this simmering dynastic conflict on hold, during which time the positions of most major players were upended; Isabella found herself embroiled in a dubious venture to the province of Luthoria on Eura during the dying days of the Alexandrian Empire, while the precipitous flight of Dravot and Liv had left young Vidar under the custodianship of his grandmother and cost them ultimately the rule of Goldshire altogether.

Following the accession of King Ryker to the throne of Goldshire, upon its repudiation by the regency of young Kaiser Ayreon IV, in the year 1650, the Emirate found itself placed firmly outside the defined limits of the Kingdom, which was seeking finally recover its lost glory after the civil war and Elwynnese-Imperial occupation. The significant cultural and political differences between the islands of Jadid Khaz Modan and the Goldshire mainland being borne strongly in mind there was little appetite to maintain ties of mutual obligation between Goldshire Hamlet and Arg-e Ardashir. Accordingly, by the means of Imperial Decree 949, the Emirate was reincorporated as an Imperial Dominion under the rule of Isabella Simrani-Kalirion.[1]

Whilst the disappearance of the final vestiges of Goldshire's rule might have been welcomed by the local populace, the restoration of the House of Osman, along with an immediate hike in the tax burden from 2% of GDP as a constituent of an Imperial State to 10% as a dominion, was not. The Emirate also exposed itself to an unexpected financial liability to the tune of 489.4m Erb for the unorthodox incentive offered to former members of the Jaysh al-Sathrati to rejoin the new formation being raised on the island.

The Lords and Commons of the Islands, in light of these factors, have been loath to render their submission and fealty. Instead a movement began to gather apace to elect a High Reeve from amongst the nobility of Amity and a Great Chieftain on Mirioth to make representations on behalf of their "ancient liberties" to the Regency in Shirekeep.

It is a remarkable coincidence therefore that, at the same time as the dissenting lords and commons made their objections known, the estates and properties of the landed gentry began to come under attack from an assortment of criminal gangs. Over the course of the year 1650 feral gangs of urchins, known collectively as "Basani's Whelps", have emerged from the bush to terrorise the rice, palm oil, coffee, rubber, cocoa, and nutmeg plantations of Amity's interior. The extent to which their dubiously attributed father exercises any guiding influence upon their depredations remains a mystery.

Under the terms of the Family Compact of 1654, Isabella Simrani-Kalirion, as the ultimate victor in the localised power struggle between the wives, daughters, and cousins of Tokaray al-Osman, upheld her claim of title to the Emirate and retained control of the Jaysh al-Sathrati. Her niece, Azardokht, being the most strong-willed of the surviving rivals, received a sinecure within the Nationalist & Humanist Party, recognition as Patroness of the Shirerithian branch of the House of Osman, and the ward of Grifonagaat for which her title was confirmed in the first month of Silnuai, 1655. She was also released from her engagement to Isabella's son, the underlying cause of her revolt and defiance of her domineering aunt. In reality however, as one of the foremost members of the defeated party, Azardokht was expected to quit the islands and find her fortunes elsewhere. It was fortunate therefore that the resumption of war with Jingdao had given the latest Steward, Waldemar Zinkgraven, cause to send Azardokht as a member of a delegation dispatched to the faltering Raspur Khanate, to shore up it's decrepit ruler, Tahmaseb II Osman.

It was the resumption of that same war that prevented Isabella from employing Imperial troops to assist in the suppression of the last remaining rebel lords and townships in the isles. 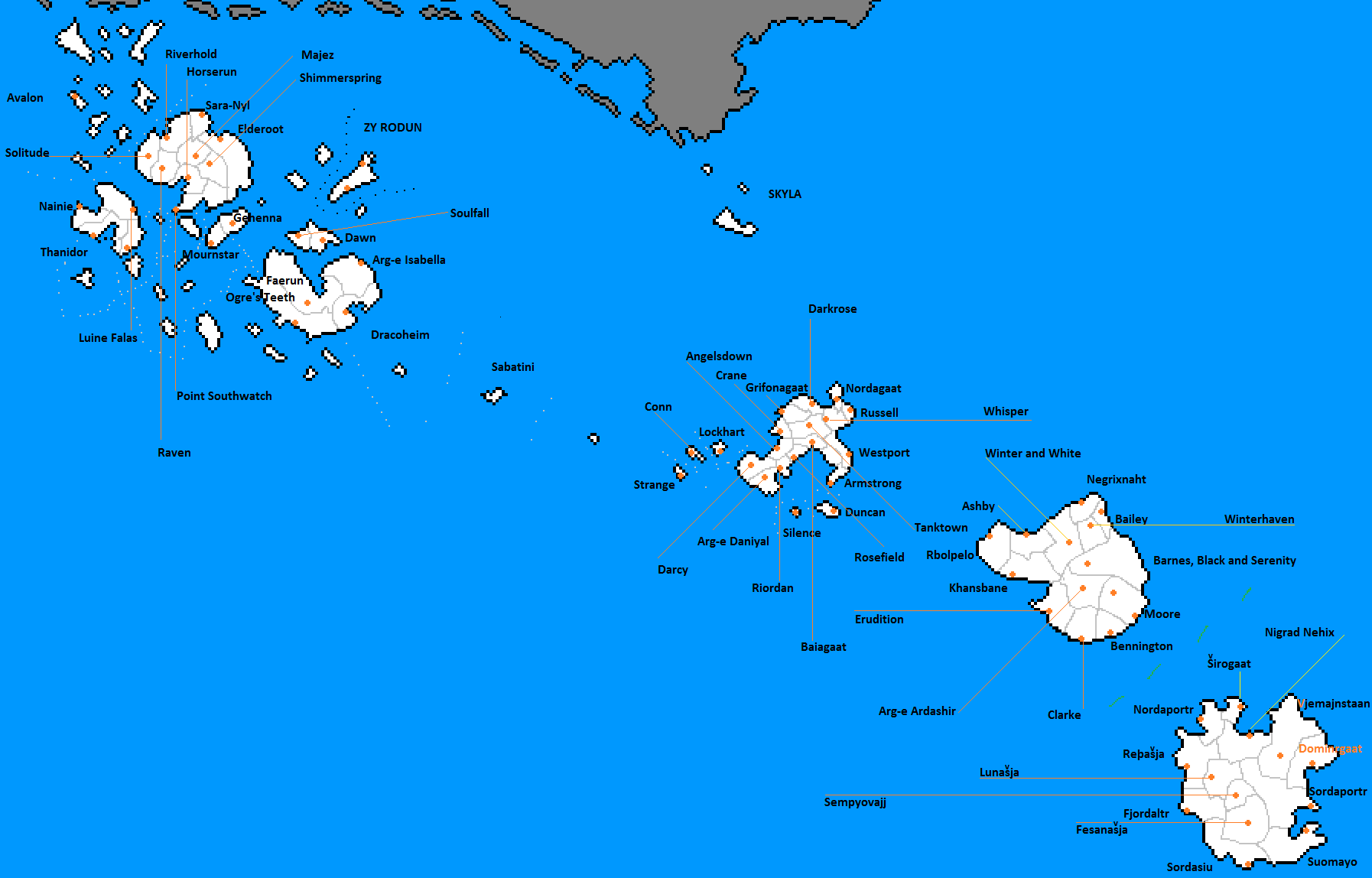 The political map of Jadid Khaz Modan as it was in the year 1650.

The present government of the Emirate has been likened to a despotic monarchy trying to impose itself upon a chaotic and unravelling feudal structure.

As an Imperial Dominion, the Emirate, comprising of the islands of Amity and Yardistan and their dependencies, operates under the purview of Imperial "Federal" Law; however Imperial Law does not cover every aspect of public life. Outside of the law, life on the islands is regulated in accordance with ancient Babkhi custom and philosophy. The function of the Emir or Emira therefore is to uphold and defend the Harmonious Society through orders known as farmâns, that regulate the political, social and economic aspects of life on the island.

The Emirate is divided into two administrative counties, Amity, Mirioth and So-Sara & Yardistan which are in-turn subdivided into Wards, municipal authorities with a large degree of autonomy, being either ruled by directly installed appointees or by locally elected councillors and reeves.

Traditionally, Mirioth, Amity, and So-Sara was a feudal county ruled by a count, who was answerable to the government of the Duchy of Yardistan and in latter years the Imperial State of Goldshire. Below the count though, each island was customarily ruled in different ways, which reflected the different cultures and histories of each island. The count was assisted by three High Reeves and a Seneschal.

Following the interregnum and the separation of Jadid Khaz Modan from Goldshire, of the seventy-one administrative wards of the Emirate a mere twenty-two remain in formal submission to the newly installed Emira. Of these, six are fortified Babkhi settlements (Arg-e Ardashir, Arg-e Daniyal, Bandar-e Kalirion, Arg-e Isabella, Arg-e Miranda & Arg-e Noor), while a further settlement (Khansbane) was a focal point for the Euran diaspora. Yardistan remained peaceable, with twelve wards paying homage to Aldin Ayreon-Kalirion as Count, whilst Novi Nigrad has been surrendered to the Jaysh al-Sathrati. The only other non-Babkhi or Yardistani wards that remained nominally loyal were Erudition on Amity, which is controlled de facto by the Iron Company, and Sabatini, which is an Imperial Forces Depot and Base Facility serving as a home port for the Western Armada.

The period of the interregnum has left many of the local communities with a deep-seated sense of their communal liberties, presenting a challenge to the re-imposition of direct Emirati rule. The disunity of the islands however plays in the favour of the Houses of Simrani-Kalirion and Osman.

Since the appointment of Isabella Simrani-Kalirion as Emira by Steward Luix Rakira in 1650 AN, the internal security of the islands, as a seat for several prominent members of the House of Ayreon-Kalirion has been placed in the hands of the Jaysh al-Sathrati.

As an Imperial Dominion, the Emirate relies upon the Federal Government for the defence of the islands from external aggression and the Ministry of Military Affairs has responsibility for the these arrangements. The islands are garrisoned by VI Corps of the Frontier Army whilst MoMA Station Sabatini serves as the home station of the 2nd Banner Group of the Imperial Navy's Western Armada. There are also a number of air defence and early warning installations maintained on the Isle of Yardistan.

The island of Sabatini, heavily fortified since the 16th Century AN, forms the lynchpin of Shireroth's outer-line of defence for the Benacian continent against seaborne invasion.