The Phoenix Forest is a forest in the Royal Precinct known as the County of Illumination and Cimmeria. It is one of the Four Forests. A cultured forest though and not untouched, planted in the early 1500s by Ozarka Monto, and provides the area known as Illumination with a lumber/timber industry. The south of the forest is mainly pine and fur, while the northern parts of it, closer to the northern tree line consists of bush-like downy birches. Still, the forest is home to many other species of flora and fauna. The hangover owl (Strigida crapula), for example, is endemic to Elwynn Proper, and has a big presence there, having migrated from the south in Utasia. Dragons may also found, albeit extremely rarely. No sightings for several decades. 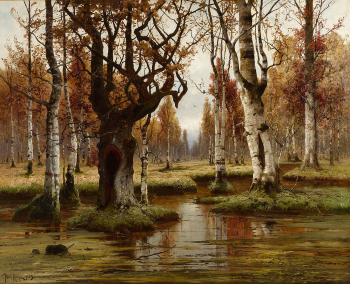 The northern edge of the Phoenix Forest is dominated by birch trees.

A subspecies of the Micran polar bear (Ursus maritimus sylvestris) is adapted to forest dwelling and lives in that forest too. In the summers its coat turns grey-brown-ish while in the winters it returns to its normal white.

Along with vast swathes of Elwynn during the Elfinshi War and the subsequent reign of Baron Ardashir, the primordial forest of County of Illumination was clear-felled to provide timber for the booming construction industry on the Euran continent, which was then under Babkhan rule, and also for the construction of the new cities established in Elwynn by Baron Ardashir, such as Ardashirshahr, Vijayanagara, Civitas Nova, Glenfiddich and Caligae. This extensive deforestation also helped provide employment for those Elw left displaced by the war as well as reducing the overall area in which Elfinshi guerrillas and refugees could find shelter or sanctuary - greatly assisting in the systematic extermination of the kin of Mari Greenwood.

With Ardashir's departure the Barony passed to Ric Lyon who sought to effect a reconciliation between the various warring groups of his new domain. One such attempt was an effort by Ozarka Monto, a Halluci settler from Kildare, to establish an Elfinshi reservation in the Phoenix Forest. In this he was bitterly opposed by the Babkhi community settled in Elwynn by Ardashir. However the outbreak of the War of Vengeance prevented a second genocide and small Elfinshi bands continued to surreptitiously move about the countryside, with the Phoenix Forest serving as one of their main sanctuaries.

The Froyalanish and Haraldian Wintergleamish communities consider the Phoenix Forest to be an intrinsic and integral part of their religious world view - in other words a Godsgrove writ large - along with the other forests of Elwynn which, with the exceptions of the Forest of Vorgóta‎‎, the Middarthian Marka, the Forest of Angularis, and the Forest of Araxion are newly afforested plantations established after 1623.