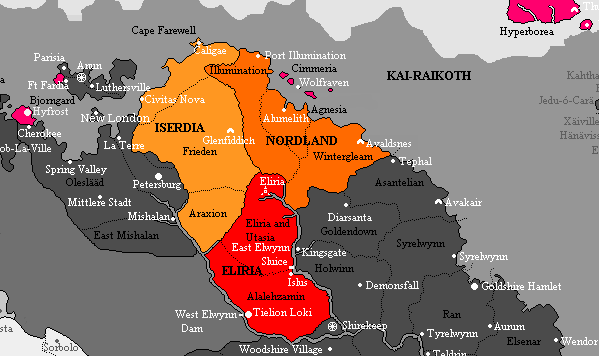 A map of the subdivisons of Elwynn in the year 1546, including Nordland.

The Barony of Nordland was a subdivision of the Duchy of Elwynn which existed from 1546 to 1562. It was comprised of the Counties of Wintergleam, Illumination, and Agnesia.

The Barony of Nordland - a name which had been chosen by Harald of Froyalan in the year 1545 upon the invitation of Scott of Alexander, at the time Lord Protector of Elwynn during consultations concerning the future reintroduction of Baronies in the Lands of the Two Sacred Rivers - was created in 1546 by Duke Iskander Mirkdale of Elwynn as part of an overhaul of Elwynn's subdivisions, which he dubbed the Age of the Megamod, decreeing that:

1. From this day forward, the Duchy of Elwynn shall be subdivided into the following Counties:

Much of the inland of the lands comprising Nordland had for much of Elwynn's history remained quite the unknown territory for most of the Elwynnese populace due to its inhospitability, except for the area which nowadays consitutes the Circuit of Illumination where the Phoenix Forest and Port Illumination are situated; the coastal regions of Agnesia and Wintergleam were, however, also rather well-developed boasting large bustling cities like Alumelith and Avaldsnes. In the coastal area of the former had even, during the the days of the War of Vengeance, one of the most pivotal events of Elwynn's history taken place: the Battle of Vijayanagara.

Shortly after the arrival of Leo Dine and his appointment as Baron a new era commenced for Nordland which would transform it in a way that no mortal had forseen.

Soon after Leo's arrival a mass of cows invaded Nordland and caused a localized phenomenon of global warming within the Barony. This lead to the melting of long frozen snows and a discovery of lost history and civilization. Approximately around the year 1551 the Barony of Nordland entered a period that would be known as The Great Thaw.

The Barony ceased to exist upon the introduction of the House System in the year 1562.