The Kai Aphmyarkaiph (Hyperborean: Great What-We-Are-Becoming) was a Hyperborean holy war and in effect marked the commencement of the second Babkhano-Boreal conflict for control of the then Duchy of Elwynn.

The campaign was a decisive, albeit short-lived, victory for Raikoth which saw the political power of the Babkhi destroyed for a generation. The Babkhi community however endured and would go on to play a fundamental role in the declaration of Elwynnese independence and the creation of the Coordinated State of Elwynn and thereby reaffirmed their place as one of the foremost of the Twelve Peoples of Elwynn.

The Prelude to the Kai Aphmyarkaiph

The second Babkhan Era in Elwynn began in 1542 and came about as the consequence of the accession of Count Hesam Jahandar of Hyperborea to the Imperial Throne. In this he was bitterly contested by the adherents of Loki who always rejected Babkhan influence in Shirekeep. Nonetheless, having gained the backing of the Hyperborean Council of Elders - who, at the urging of the genealogist Taksi Kamheinion, recognised him as a descendant of Authi Kalirion - was able to secure his title as Kaiser Hasan I Kalirion.

The War of Jeremy's Nose (1539-1542) marked the highpoint of Babkhan influence and glory in Shireroth. With the able assistance of the Haraldian Huskarls, the Babkhan led and organised Elwynnbrigaden was instrumental in a blitzkrieg that overran the Kingdom of Bosworth and saw the seating of Kaiser Hasan I on the Throne of Bosworth by Duke Harald of Froyalan (as Elwynn then was called) - but the magnanimity of Shireroth allowed Bosworth a return to status quo ante bellum.

As this war concluded and Kaiser Hasan's reign drew towards its allotted close the manoeuvring began with regards to the succession not only of the Imperial Throne but of Froyalan. The war had effectively left Harald in possession of Bosworth, particularly the region known as Gascony on the northern coast of Benacia, where most of the conflict had been fought. In order to settle this domain Duke Harald thought to leave his Shirerithian possessions in the safe-keeping of his Babkhi allies and the good reputation Hesam Jayatar then enjoyed as victorious Kaiser and wise count of Hyperborea influenced him to appoint Hesam as his successor in the year 1542.

One of Hesam's first acts had been to rename the Duchy back to Elwynn as a way of shoring up the support of the Elw for his reign. Beyond that the country remained essentially unchanged.

Things did however begin to go awry when Hesam's machinations, only the surface of which were visible, began to impinge upon the now less intricate plottings of the Khan of Vijayanagara, Aurangzeb Osmani. This boiled down to a vulgar division of the spoils that would be dispensed at the Kaiser's abdication. Essentially Aurangzeb demanded a larger cut than Hasan was willing to concede. The upshot was the infamous showdown at the Lycurgus Club in Ardashirshahr where the erstwhile Kaiser was brutally gunned down by his treacherous lieutenant.

The reward for Aurangzeb was the Ducal throne. At this point the Babkhi could be said to have won all. Now they proceeded to lose all, and in spectacular fashion.

During the reign in Shireroth of Kaiser Hasan I, Hasan had controversially ceded all sovereign power over Shireroth to the Babkhan shah, Rashid. The Sword of Vengeance was a personal gift from Hasan to Rashid, and Hasan had inscribed Rashid to be his heir in Shireroth in his will, as a form of retirement gift. Kaiser Hasan was however murdered in Ardashirshahr, and in a bitter feud over succession with Jacobus Loki, Rashid was eventually declared the Kaiser of Shireroth. The Babkhan shah, recognized by Babkhan law and Rashid's feudal allegiance, gave Rashid and his successors the title Emir of Sathrati.

The treachery, when it was discovered, partially through ill-timed Babkhan gloating, and partially from the guilt racked conscience of Kaiser Ayreon himself, spectacularly blew apart both the Mango-Camel Pact and the constitutional order of Shireroth. The result was uproar in Shirekeep - where Jacobus Loki was finally poised to seize the Imperial Throne, consternation in Eliria, and from the frozen wastes of Hyperborea there came news of a revolution.

Soldiers of the Yarad Brigade of the Kaiser's Life-Guard, attempting to enforce a lockdown in Shirekeep

The restive partisans of Anti-Kaiser Loki II rose up in rebellion in 1542 when succession of Kaiser Ayreon was announced, and this was before the secret clauses were known, the natural consequence of which was dissension amongst the nobility and uproar in Shirekeep. The Imperial Government was, as a consequence, severely paralysed and incapable of independent action. Imperial Forces were deployed to secure the capital but were given no clear instructions as to rules of engagement and received contradictory orders on whether to treat the Partisans of Loki as hostile or not. As a consequence, the Lokiists were able to run amok in the city, siezing key institutions.

In the north of Benacia, from Raikoth to Cimmeria and Bjorngard and down to Mishlan, the bear is accorded a particular cultural significance. For this reason the ability of various armed groups and militias to domesticate and train bears to serve as cavalry mounts has been an occasion for great prestige, to the extent that bear cavalry persisted long after horses and camels were relegated to ceremonial and law-enforcement duties. No matter that a bear posses a greater threat by mauling to the poor soul expected to train or ride it than to the enemy, the lunacy persists.

While the key cause of the Raikothin failure at Caligae was being lulled into a protracted negotiation that allowed the garrison commander to consolidate his forces, the moment that signalled the defeat was the decision to unleash the 600 bear-cavalrymen in a charge over lightly forested and open terrain against an enemy in prepared defensive positions. In spite of the charge going in before dawn, the Elwynnese had sufficient time to reach their firing platforms and to be able to employ their ranged weapons against the lumbering bears as they sought to smash their way through the defensive obstacles the Elwynnese had set during the night.

In spite of this, a 'rule of cool' means that the bear cavalry is likely to continue sending Grizzlies to a grisly demise for the foreseeable future.

Without the support of the wider Elwynnese community, in large part alienated by the revelations made by Kaiser Ayreon, the Babkhi fought on bravely but after the destruction of the Elwynnbrigaden at the Second Battle of Vijayanagara the Fedayeen were unable to halt the relentless southwards progress of the Raikothin Paladins. Eliria was abandoned without a fight and by 1543 the Paladins, aided by Elwynnese rebels and Jacobin insurgents from the Imperial County, were converging on Ardashirshahr. 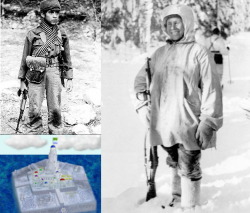 The last days of the Elwynnbrigaden

Seeing the futility now of further resistance, Duke Ardashir negotiated with the Imperial Government for exit visas and safe passage for himself and his family. Many other leading nobles and military commanders took their cue from the Duke's flight and fled similarly to the airport and the riverside docks in a frantic effort to escape. With morale collapsing from the top downwards, the remaining Fedayeen forces soon lost their cohesion and began to either surrender or else to merely melt away back into their communities or out into the wilderness. The Babkhi community was completely at the mercy of the conquerors. Fortunately however the Hyperboreans proved to be magnanimous. The Elwynnese may not have been willing to die for the Osmanids but they were equally unwilling to see their neighbours persecuted and uprooted. Save for a few instances where the few remaining Elfinshi sought to take reprisals against their persecutors of 54 years previously, the changes that befell Lesser Zjandaria were nowhere near as severe as they might have been, or indeed as they would have been had a victorious Babkhi militia stormed the settlements of the Raikothin instead. The changes were cosmetic or else largely related to the ruling classes; Ardashirshahr was renamed Tielion Loki, Lesser Zjandaria in time became Alalehzamin and Duke Ardashir was replaced by Duke Yarad, a Hyperborean from the House of Kalir.