From ShireWiki
(Redirected from Kai-Raikoth)
Jump to: navigation, search

Raikoth is a civilization on the eponymous island (also known as Hyperborea) north of Benacia. Although it has a long history as an independent nation, it is now a subdivision of Shireroth and a precinct of Elwynn. 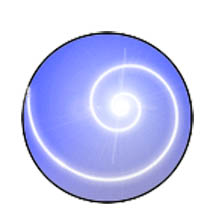 Raikoth was founded by Scott Alexander and Adam Stone in spring 2000 as the micronation of Hyperborea, intended as a sanctuary for refugees fleeing the fall of Audentior. It was unique in the Apollo Sector of micronations for its strict single-citizenship policy, its relative isolationism, and its rigorous screening of potential citizens. These same factors that gave it its special character also retarded its growth, and although at one time it had over a dozen citizens and a flourishing government, it eventually sank into the general chaos of the Apollo Sector at the time, merging and unmerging into New Audentior and Jasonia.

Hyperborea became independent again after the fall of the Union of Apollo States, and had a second brief period of flourishing during which it played a pivotal role in the foundation of the Micronational Cartography Society. This period saw a shift to a more Nordic theme, the rise of Ryan Caruso as an important political leader, and a gradual relaxing of its strict code to permit closer ties with Shireroth. The period ended with its absorption into the Commonwealth of Benacia, the Hegemony of Alexandros, and eventually the United Republic of Tymaria. Due to the internal politics of Tymaria, Hyperborea found it expedient to annex itself to Shireroth; a treaty gives it the unique right to secede from Shireroth whenever it desires. 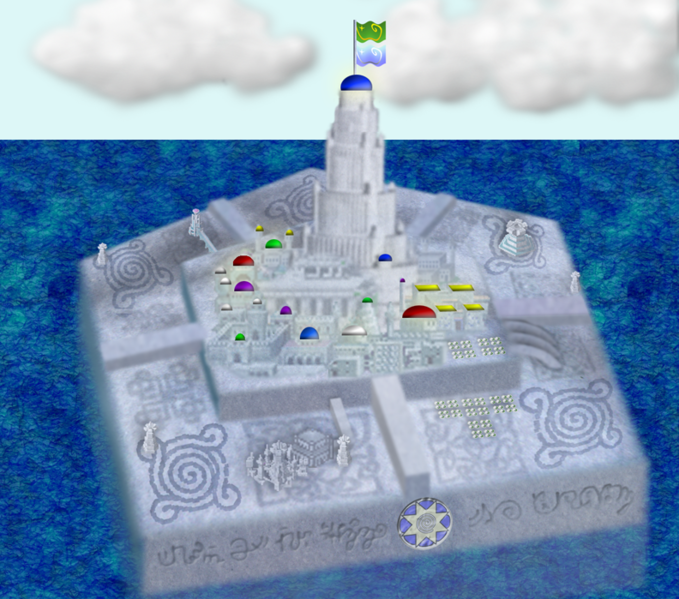 The Erital Rhase Paha Muithyan or "Queen of Night's Repentant Children", a hollowed-out iceberg that served as flagship of the Raikothin navy during the Babkhan Wars

Within Shireroth Hyperborea became an important cultural center and eventually the leading region of the Duchy of Elwynn. On January 1 2003 it absorbed the rest of Elwynn to become the center of the Duchy of Hyperborea, an entity which included such important Shirerithians as pro-democracy leader Philip Locke and Eoin Dornan (later Kaiser Yarad I). Around the time of the so-called New Feudalism, political leader Scott Alexander decided he wanted to make it less of a power player and more of a cultural development project; Hyperborea was demoted to a County, or single-person fief, and renamed Raikoth, its original name in the Hyperborean language. It later became the center of Kai-Raikoth, a larger political division including Cimmeria, Bjorngard, and parts of mainland Elwynn.

Since then, Raikoth has concentrated primarily on developing its constructed society, especially its religion, government, philosophy, art, and architecture. In this it has been generally helped by its long-time foil the Zjandarian Babkhans, whose conflicts with the Raikothlin formed the basis for many interesting stories. These briefly took on a national significance when Babkho-Hyperborean leader Hesam Jahandar rose to the throne of Shireroth, but quickly returned to local interest only after his equally abrupt fall. Raikothin culture changes every few years based on Alexander's current conception of a utopian society, but retains several constants that have kept it recognizable within Shireroth and the broader Micras Sector. 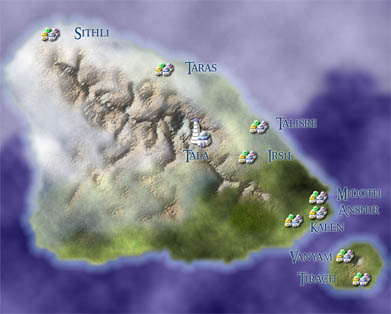 Geography and major cities of Raikoth

The seven major cities of Raikoth were united in prehistoric/early historic times by conquerer Narsi Nodorion, prompting widespread resistance to his rule. When a volcanic eruption plunged the land into famine and darkness, holy man Kadmi Rachumion made Narsi an offer: he would intercede with the volcano spirit and restore prosperity, but Narsi must give him the throne if he succeeded. Kadmi then went on a pilgrimage through polar wasteland to Mount Yaanek, the icy volcano in the center of the island, entered through a cave, and pled to the volcano spirit for mercy. The volcano spirit introduced Kadmi to its masters, the true gods of the universe, two extraordinarily powerful beings named Truth and Beauty. Kadmi won promises from Truth and Beauty to quiet the volcano in exchange for his promise to spread enlightenment, virtue, and happiness to Raikoth.

Narsi Nodorion kept his word and abdicated the throne in favor of Kadmi, but the prophet faced several years of warfare before he could ensure that the fragile coalition of cities held together. During this period he was helped by a series of astounding events, including a star falling from the sky to fight in his armies, and Kalirin princess Kaya Kalirion agreeing to aid his cause in exchange for immortality (a promise Kadmi delivered by teaching her the art of writing). After unifying the cities, Kadmi began construction of a new capital, developed a new language whose very grammar was inimical to falsehood, took disciples from all over the island, wrote a record of his wisdom in the Book of Cold Rain, and finally died.

Nithi Kirenion once described Raikoth as an "emergent oracular techno-theocracy", although it's unclear if even he could explain exactly what this meant.

Much of the important governmental work in Raikoth is done by oracles, people or organizations who predict the outcome of events using historical analogy, mathematical models, or educated intuition. Oracles are monitored and ranked on the accuracy of their predictions, with more accurate oracles rising to greater importance in determining policy.

Various priesthoods, especially the Priests of Joy, are tasked with creating databases of population values, including exchange rates for various quantified material and philosophical goods. Through discussion in Kadhamic, a constructed language in which it is difficult to speak falsehood, these values are made to reflect upon themselves and determine the true will of the Raikothin people.

Anyone with a plan for improving Raikoth is welcome to run the plan through an oracle and determine its effect on those parameters which the society values; those plans which increase the happiness of society take the force of law, and are promulgated and enforced by independent governmental organizations.

Raikoth considers itself a theocracy because its government is meant to implement the will of the gods, Truth and Beauty. This is understood pragmatically as trying to fulfill the potential of the world by acting with clear and correct understanding of reality. Because of this theocratic tone, most government officials call themselves priests of one sort or another.

The Raikothin religion, Sumurayh'Borelan, consists of a philosophical layer of dual theism overlaid upon a much older background of animism and superstitious tradition.

Most prominent is the worship of Elith and Ainai, Truth and Beauty, who are viewed simultaneously as mystical forces, anthropomorphic beings, and everyday concepts. Truth represents the physical world-as-it-is; Beauty represents the subjective inner world of meaning and desire. The world is the dialogue (mystically, the act of procreation) between Truth and Beauty: matter self-organizing according to law to give itself subjective meaning, and it constantly tends towards a state of greater integration - reality made more beautiful or beauty made more real. Humans are natural parts of this integration, and the purpose of human existence is to resolve the seeming conflict between truth and beauty in order to make the universe more fully created. The child of Truth and Beauty, and the natural result of the procreative process they undergo, is Joy.

In addition, Raikothin mythology includes a dizzying array of local gods, mountain and river spirits, ice demons, and various entities representing everything from the hours of the day to to the terms of an oath. Many center on the fantastic lands to the north of the world, inhabited by glorious civilizations of polar bears and terrifying dancing lights. These myths also list various rituals and superstitions necessary to propitiate these spirits and live in peace with nature. 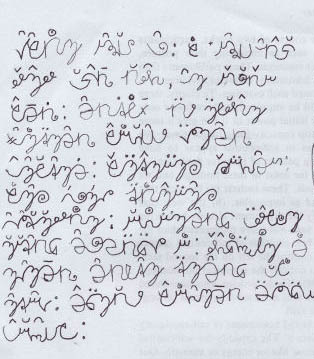 A sample of early Raikothin script from the Codex Hamiltonensis

Kalasperin, the vernacular of Raikoth, is an agglutinating VSO language nominally in the Nostratic family, and is still under construction. The final product should bear some resemblance to Greek and Finnish but be essentially a priori. The written form of the language is a flowing script of eighteen letters representing consonents plus optional diacritical signs representing vowels, and is recorded in boustrephedon. Each letter is based off a part of the natural world (for example, 'm' is an apple, 's' a river) and words take on poetic or kabbalistic meanings based on the arrangement of their constituent letters.

Kadhamic is an artificial language used to discuss philosophy and politics. Its austere, minimalist structure removes assumptions and value judgments - making propaganda, hate speech, and logical fallacies difficult. For example, a sentence like "Southerners dislike art" would be ungrammatical: the Kadhamic version would come out more like "(I believe with between 50-99% probability) (a majority of) Southerners (have a significantly greater tendency than Northerners to) (emotionally) dislike (what I define as) art", an empirical statement which can then be investigated to determine its truth or falsehood. An absolute taboo on discussing emotional issues like politics in any language but Kadhamic prevents it from becoming a source of division in society and leads to an unusual amount of concord on what would otherwise be controversial issues.

Raikothin society is based on a philosophy of deterministic materialist utilitarian noology: the belief that the world operates by rational laws, that correct understanding of those laws promotes an urge to improve human existence, and that improving human existence requires particular focus on the inner workings of the brain and mind. This is cashed out in a nationalized formalization of positive psychology, the science of determining what makes people enjoy their lives. 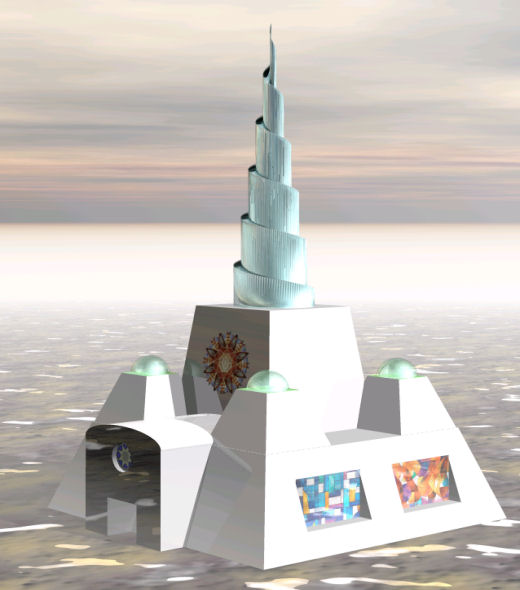 Raikoth practices a non-coercive form of eugenics in which financial and social incentives are used to convince certain people to have more or fewer children, and a highly coercive form of euthenics, in which couples considered at risk of neglecting or abusing their children are forbidden from conceiving and in which the biophysical environment in which children are raised is carefully monitored. As a result, there is an unusually low level of disease, maladjustment, and violence among Raikothlin.

Raikothin art focuses on color and geometry, with representational art less common than in many other cultures. Popular media include stained glass, woven fabric, and embellishment of walls, floor, and ceiling. Calligraphy and illumination of manuscripts are also very popular, as are jewelery and (generally nonpermanent) body art.

Architecture is usually monumental and austere, but sometimes includes spectacular domes and minarets. Although the majority of the population live in mobile but comfortable structures resembling yurts, a core of permanent buildings in each city are made of gleaming stone, usually with stained-glass windows, tiled floors, and other decoration. It is common for entire texts to be subtly engraved into the walls of buildings.

Raikoth considers itself less a micronation nowadays than a work of constructed culture or geofiction. However, it remains in the micronational community to keep in touch with the many connections, allies, and enemies it has made over the years, as well as out of loyalty to its relationship with Shireroth. The most important micronational contact for Raikoth is Nithi Kirenion, whose title is usually given as " High [unstranslatable] of Raikoth". Nithi is a login of Scott Alexander's.

Raikoth has strong connections with the surrounding Shirerithian lands, including Cimmeria, Bjorngard, and North Elwynn. Bjorngard is considered a mostly-assimilated Raikothin colony and fortress; Cimmeria is a half-civilzed realm currently undergoing a rebellion against Raikothin cultural encroachment, and North Elwynn is at uneasy peace with the treasonous Elwynn Riqi Adurellion, against whom Raikoth has sworn to defend them.