From ShireWiki
(Redirected from Lordship of Blackstone)
Jump to: navigation, search

In the olden days, the island of Blackstone was part of the mythical kingdom of Luthièn. All that is known from this particular era are myths or lore of questionable validity. It is believed that Luthièn was home to Elfinshi settlers, who, following the genocide by the Babkhi, fled to western Benacia. Still, this is not confirmed by actual historians. 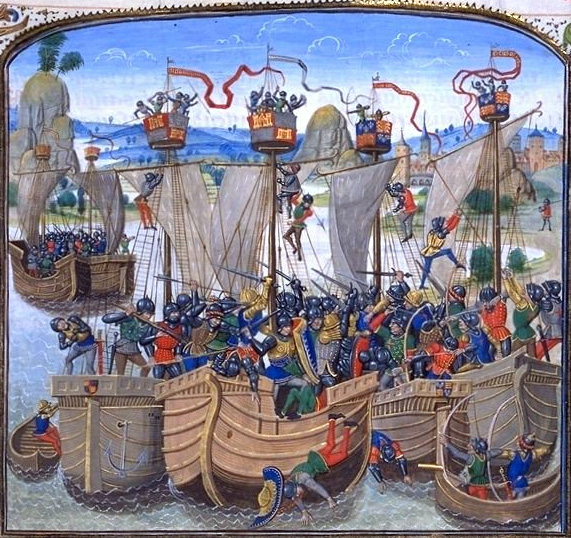 In early modern times, the island was incorporated under the Kingdom of Batavia, but not without a fight. According to the Batavian cronicler Frederik Hendrix, the Lords of the Blackstone tried to steer off the Batavian occupation and declared independence. The Batavian king Arkadius I sent a naval force to invade Blackstone. The island under Batavian rule was subsequently renamed "Medici".

Fell under Jingdaoese occupation in around 1648 AN.

The largest part of the island is urban. The city of Blackstone covers about 60% of the surface of Blackstone island and is considered to be the Lordship's capital and houses most important political and financial institutions and public buildings, as well as the western docks. On the eastern side of the island lies the town of Port Verion, which is home to the Eastern Fleet. In the western bay lies the Isle of the Dead, a barren rock that is home to the cemetery of Blackstone as well as a small fortress. The fourth district is the district of Medici, which is largely comprised of gardens, farms and a small forest in the North. The district seperates Blackstone city from Port Verion. Each of the districts is governed by a seperate governor, the Warden. The Wardens answer to the Council of Ten.

The Colony of Itteria is currently the only colony of Blackstone. The Iron Company colonised a part of the Benacian green claimed by the exiled Kildari Kingdom of Voltrue and the Confederation of Puritanian States, a protectorate of the Imperial Republic of Shireroth, and started mining silver in mines near the town of Castelluccio. In order to transfer the silver, a modern road was built to connect the town with the newly established coastal city of Porto di Ferro. Although the Iron Company currently exercises control over the Itterian Colony, it is officially part of the Lordship of Blackstone.

Warden of Medici: the Abano

The Abano family is one of the oldest residing families of the Island. The family became prominent under Batavian rule where they held the position of Mayor of Medici for almost a century. The Abano's arrived on Blackstone as merchants and soon became a wealthy family. Their political influence did however not extent beyond the island and they became impoverished when the economy of the Kingdom of Batavia stagnated. The return of the mercantile trade in the past years has lead to a re-emergence of the Abano family. Current head Nicolas Abano serves as Warden of Medici.

Warden of the City of Blackstone: the Casterly

House Casterly was one of the first houses to declare allegiance to the Verion family, and were rewarded for their loyalty by receiving the Wardenship of the City of Blackstone. Progenitor William Casterly was a Brettish immigrant, from the county of Norfolk. He grew up in a poor family as the son of a farmer. When moved to Blackstone, Casterly became an architect and

The Council of Ten meeting in the Palace Courtyard

designed the ingenious canals and irrigation system. Casterly was rewarded for his work by being made a member of the Council of Ten. Williams grandson, Henry Casterly is the current Warden of the City of Blackstone.

Warden of the Isle of the Dead: the Drogion

The Drogion's are one of the more peculiar families of Blackstone. They originate from Southern Elwynn, where their ancestors served as soldiers under the Duke Ardashir II. After moving to Blackstone, they built a rather grim fortress on the Isle of the Dead, given this name because of the brutal way in which the Drogions disposed with rebelling Batavian forces. The Drogion family have made their fortune by using the island as a cemetery for the residents of Blackstone. Ludovic Verion named patriarch Melchior Drogion Warden of the Isle of the Dead, because he didn't really have a choice.

Warden of Port Verion: the Lewis

Probably the most infamous noble house in Blackstone is House Lewis. The family was brought to the island by Aullaris Lewis, the son of the famous Icebearian rebel and kamikaze pilot, Jack Lewis. Like his father, Lewis was a devout member of the Holy Church of the Divine Icebear and one of his first actions was to set up an Icebearian temple in central Blackstone. Historically, there have always been strong ties between the Verion and the Lewis families, so it wasn't much of a suprise when Aullaris, now 101 years old, was awarded the title of Warden of Port Verion.

One of the more typical characteristics of the isle of Blackstone are the Canals.

A typical Blackstone canal, with the granite dome of the Temple visible in the centre

About ten large canals, and countless smaller ones, create a pattern of roads of water, commonly used by Blackstonian merchants and transporters. The canals are partially artificially created, but also partially natural. In the olden days, Blackstone consisted of five smaller islands, lying very close together. The bridging of these islands created the structure that we currently see. In the early 17th century, William Casterly, engineer from Brettania, worked to expand the canals and to fortify the land, in order to prevent the collapsing of houses built close to the water.

In the North of the island, just outside the walls of the city, Blackstone Castle is located. This castle, built out of granite, has been built during the Batavian period. It is thought that the black granite of the castle is the source of the current name for both the castle and the island. In recent years, the castle is an official residence for the Lords of Blackstone, although the high costs of heating the castle, and the slightly unappealing atmosphere of the place, have caused the castle to rented out. 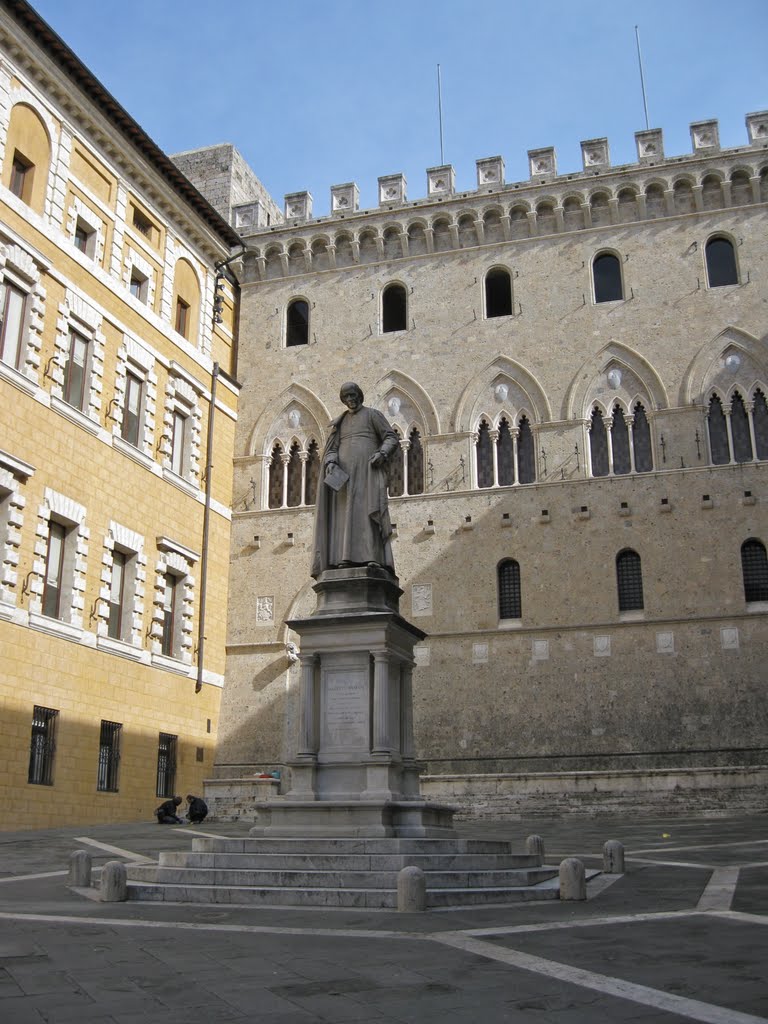 The Statue of Elu Verion on the courtyard of Verion Hall marks the place where his ashes are buried.

The place where the current Lords of Blackstone reside is called Verion Hall. This comfortable palazzo was built on orders of Ludovic Verion in a classical style. Althought the Hall was officially only the mansion of the Verion family, the connection between the Verions and Blackstone was so obvious that Verion Hall can be regarded as an official residence.

The Iron Company is the only chartered company of the Lordship of Blackstone and has numerous privileges. A delegate from the Iron Company has a seat on the Council of Ten, 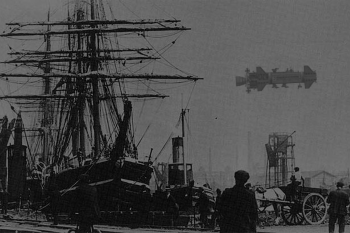 The bustling Port Verion with the IRS Medusa loitering overheard during the visit of Kaiser Dominus to the island.

and the Company has the exclusive right to banking and the minting of coinage on the island. Because of the double role of Ludovic Verion as both Grand-Governor of the Iron Company and Lord of Blackstone, the political system of the Lordship is often referred to as "corporatocracy".

Port Verion and the Shipyards

The Iron Company's headquarters are found on the Western side of the island, where the Company's shipyards are also located. The Iron Shipyards are key to the success of the Blackstone economy. Large containerships, as well as fast and swift lighter vessels are produced and directly used to sail the seas of Micras. The town of Port Verion, on the East of Blackrock Island, serves as the main port of the nation. It houses the main fleet of the Iron Company, and is key in the trade with the Benacian mainland. Port Verion also funtions as the staple market for goods that are imported from Benacia and transported overseas by the vast mercantile network of the Company.

The Black Guard is the household guard of the House of Verion. It was founded when Elu Verion was the head of the family, to protect the Elfinshi family against militant Elw and Babkhi groups 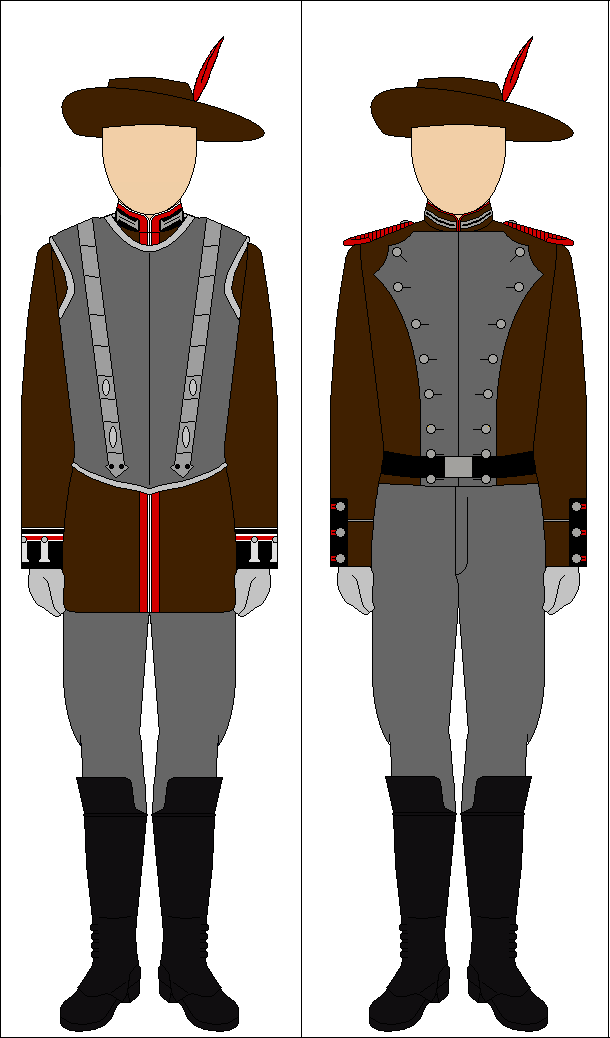 Uniforms of the Iron Militia

who sought to diminish the still existing Elfinshi tribes and their land. The Black Guard protected the Verion lands around Azshara. After the rise to prominence of the Verion family, the Black Guard expanded, forming a band of bodyguards to protect the family members of importance. Following the move to Blackstone, he Black Guard became one of the official armies of the island, guarding the government buildings and the personal property of the Verions. 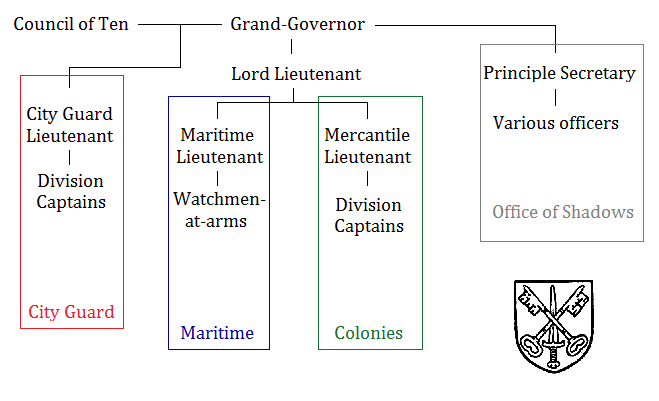 Governing structure of the Iron Militia

protection for the vulnerable ships that sail all over the globe. Aside from this, the Militia has a secret branch, known as the Office of Shadows, that serves as an intelligence gathering service for the Company. The existence of this office is neither confirmed nor denied by the Grand-Governor.

The predominant religious organisation in Blackstone is the Realist Temple Church, a Deistic church that originated as a blend of Batavian Catologists, Brettish Jovism and members of the Holy Church of the Divine Icebear. The establishment of the Realist Temple Church was the source of a schism amongst Icebearian believers, some of which who saw the Icebear as a metaphoric concept, while others literally believed the Book of Ice. This lead to the establishment of a seperate branch of the Holy Church of the Divine Icebear in Blackstone. The Temple, from which the Realist Temple Church takes its name used to be the Icebearian temple, but became the main building of the Church after the schism.

Aside from the Realist Temple Church and the Holy Church of the Divine Icebear, there are several other religious practiced by a minority of Blackstonians, such as Cedrism and Zurvanism.