The House of Verion is a noble and Imperial house from Northern Elwynn. It originated in the early 15th century in southern Illumination, shortly before the establishment of the Duchy of Elwynn. The House of Verion is in origin Elfinshi but has merged with other ethnic groups over the years, most notably Cimmerian, Norse and Elw. The early members of the House have served as rulers of the Elfinshi people west of the Phoenix Forest, so it should not be surprising that members of the house have held some positions of importance in both Elwynn and Shireroth.

The House of Verion intermarried with members of esteemed houses of Elwynn: several relatives of the ruling class of Elwynn, such as the Ayreon family, and a member of the Lyon's; powerful foreigners such as Balian Mounford and most notably, the Norse line of Lewis, thereby making the current head of the family, Ludovic Alixion-Verion, a descendant of the royal Einhornsson family of Normark.

The House of Verion rose to national prominence after the appointment of Jacob Darylion-Verion as steward of the Imperial Republic. Jacob was a good friend and confidant of Kaiser Ayreon III, which enabled the Verion family to establish useful alliances and marriages. Jacob subsequently served as Kaiser Verion I and the Verion family became the Imperial house. Members of the Verion family have since held various important positions other than steward and Kaiser, such as Minister of Military Affairs, Count of Illumination and Cimmeria, Count of Crowsilver, Count of Yardistan, Chancellor of Goldshire and Keeper of Fieldburg. Until the second half of Kaiser Hjalmar's reign, a member of the family has always sat on the Imperial Advisory Council.

After the dead of Kaiser Verion, his son, the Count of Cimmeria, Alex Verion became openly critical of the rule of King Harald of Elwynn. When he was installed as Kaiser Hjalmar, the differences became even clearer. In the later part of Hjalmar's reign, Alix moved from the city of Wolfraven to the Natopian demesne of Alrodey, where the Verion family held the position of Lord Regent. Hjalmar's son, Hjalmar Redquill, used this to exile the Verion from Shireroth, barring entry to Alix' son, Ludovic Verion. Subsequently, the Verion's moved to the Lordship of Blackstone.

Minister of Military Affairs, Thorgils Tarjeisson, a member of the House of Verion through his mother, ascended to the Mango Throne as Kaiser Dominus. 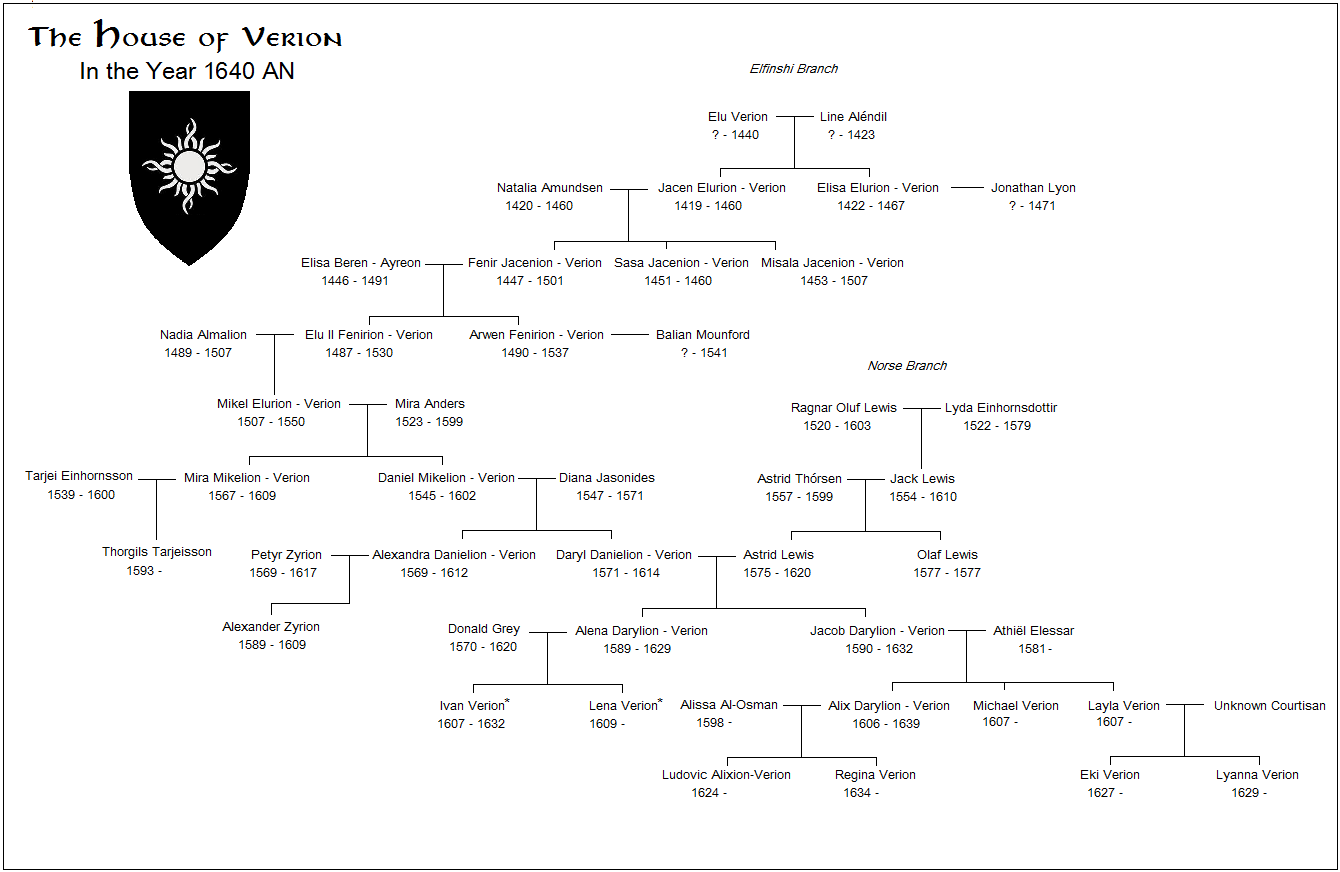 *Chose to style themselves Verion instead of 'Grey' after their father left the family, dishonouring his name.