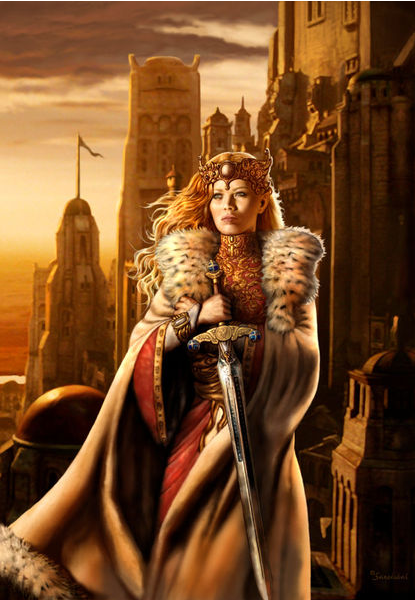 Portrait of Lady Gudrun as High Justiciar of Stormark.

Dame Gudrun Eriksdottir, The Duchess of Vesteralen, (born in Tybjerggård Hall, died at the same place in the year 1579) was a Froyalanish noblewoman, legal scholar and politician of Storish descent. She was also an Archsister of the Daughters of Freyja. Gudrun was born into the noble House of Vanadís-Mardöll, but was since her marriage to Richard Lyon in 1509 also a member of the House of Ayreon-Kalirion, and titled Duchess of Elwynn from 1509 to the amicable divorce in 1516.

In the year 1507 Gudrun - at the time Lady Chief Justice of Stormark - came to Elwynn for the first time since her childhood years when she had stayed a couple of times with some distant relatives from the Wintergleam area and the Pale of Angularis. She came to the Land of the Two Sacred Rivers at the invitation of the management of the Elwynnese Branch of the Sameinaða Erlendur Kaupsýsla Einokun Félagið (SEKEF) to mediate in a protracted complex dispute between a number of their most powerful associates which was spiring out of control.

The conflict reflected very poorly upon the SEKEF and was viewed as a grave threat to their very lucrative business in and with the Jewel of Many Facets for it was rumoured in the corridors of Eliria Castle that the White Orchid Throne was seriously considering the revocation of the very generous terms that the SEKEF had been operating under in Elwynn ever since the days of the Ducal Reign of Sirithil nos Fëanor. The SEKEF hoped that Gudrun - with her unparalled knowledge of Viking, Vanic and Valtian Law, her political astuteness, and her tremendous standing and stature as Lady Chief Justice of Stormark and one of the leading legal scholars of Micras - would be able to bring the dispute to an end before it would be too late.

Very fortunately for the SEKEF their hopes were not too high. On the contrary! Gudrun delivered beyond imagination! The dispute was resolved in no time and in a manner which would make Forseti proud, stilling all strife and reconciling all parties involved. The threat to the SEKEF's operations in Elwynn had been removed for good.

The grateful Elwynnese SEKEF - in spite of them being notoriously frugal - feasted Gudrun beyond belief, organizing a lengthy tour of honour through Elwynn with numerous events - including balls, hunts and tournamants - held all over the country in her honour. It also showered Gudrun with gifts, including lands, jewellery, a annuity the size of the salary of a SEKEF executive, pieces of art, historic artifacts, and a percentage of their annual profits. There was also a statue of Gudrun erected before the SEKEF headquarters in Avaldsnes.

With the upcoming War of Vengeance with Yardistan casting its eerie shadow over Elwynn, Gudrun decided to abandon her plans to return to Stormark for the time being and lend the Elwynnese war effort her hand. Baron Richard Lyon dispatched Gudrun to the city of Caligae, which was situated in what was to become Cape Farewell over time, to lead Elwynn's defense efforts in that city as well as its surroundings and hinterland. Caligae was the largest city in the north of Elwynn Proper and the gateway to the High North, and therefore an obvious and inevitable target for the Yardistani invaders.