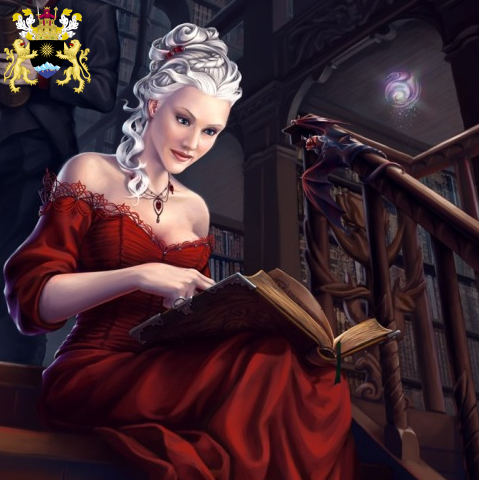 Storjarla Geirbjörg Gefialdrsdottir, the grandmother of King Thorstein Noah of Elwynn is reading her grandson's entry in the Book of Ayreon-Kalirion‎‎ in the library of Ribat Ayreon-Kalirion.

The book is a wedding gift from Prince Paul of Brookshire to his daughter Tuuler Kalir, given to her upon her marriage to the Babkhan anthropologist Eskender Arsalani to serve as a chronicle of her descendants. It has been passed down the generations ever since. It is one of the most treasured heirlooms of the House of Ayreon-Kalirion.

Tuuler's Book is two feet tall, a foot and a half wide, and a thousand pages thick. The book's pages are made of Treesian vellum and illuminated with ancient Hyperborean patterns. Its cover is made of scarlet Valtian leather and adorned with golden bands and precious stones. Tuuler Kalir's personal coat of arms is to be found on the front cover, and on the back cover is a portrait of Tuuler Kalir clad as a Hyperborean Paladin and riding a polar bear.

On the top left-hand corner of each page a member's personal coat of arms is drawn while at the bottom right-hand corner is the coat of arms of the House of Ayreon-Kalirion. On the top right-hand corner of the page is a painted portrait of the member upon reaching their legal age of majority or upon him or her becoming a member of the House, whatever may be later, while at the bottom left-hand is (space for) a portrait of the member. The portraits are nowadays done by the court photographers who are sent for once a year. Formerly, the book was illustrated by Vanic Priestesses from the White Orchid Temple, however these were expelled in 1651 after the Auspicious Occasion.