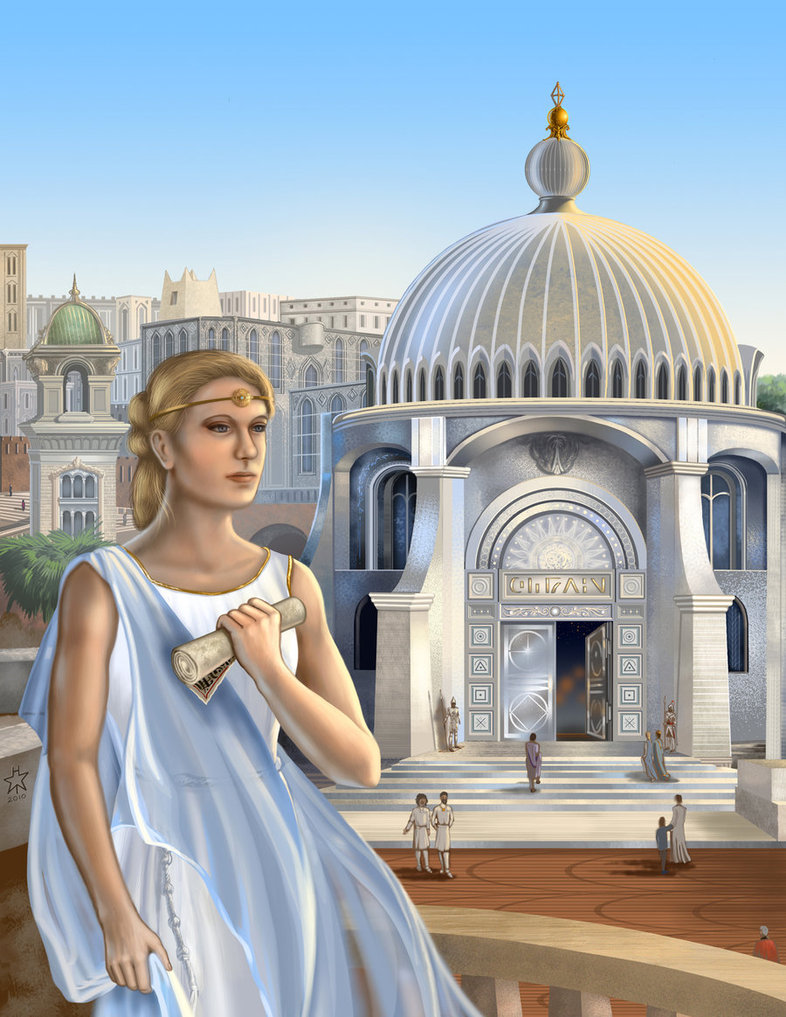 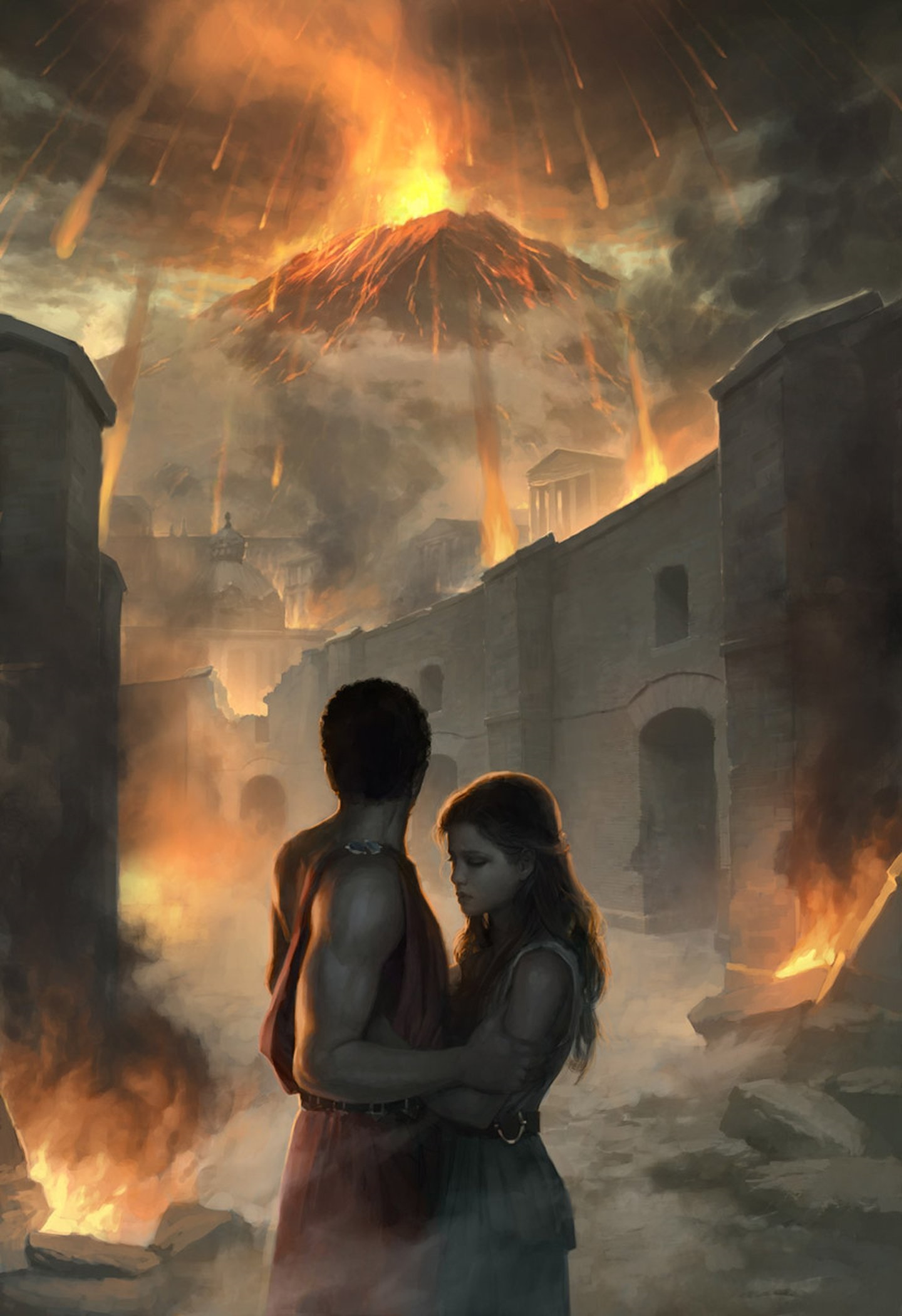 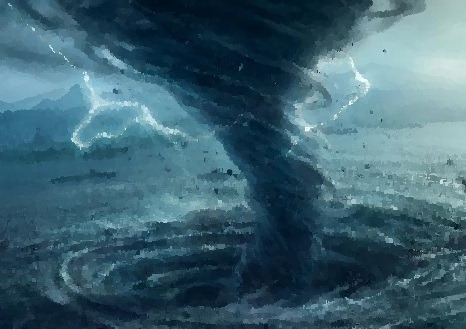 A humongous tornado-maelstrom pulling the Isle of Valtia to the bottom of the sea. 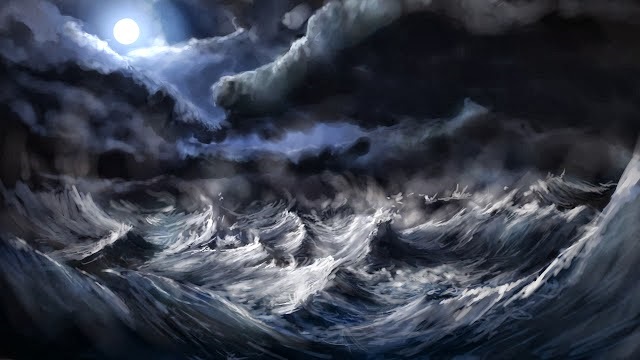 Valtia having been swallowed by the sea.

Valtias Forlǫg means Valtia's Fate in the Froyalanish and Wintergleamish languages. It is the name of an epochal event which dramatically changed the course of world history: the cataclysm that caused the destruction of the Isle of Valtia and the subsequent collapse of the Valtian Free State which had, prior to the Forlǫg, been prospering for thousands of years.

Valtia was destroyed when it sank into the sea on a winter night nearly a thousand years ago in the mysterious, cataclysmic event which is known among the the Froyalanish and Wintergleamish as Valtias Forlǫg. Among others it is often simply referred to as "The Sinking" for due to its massive destruction and historical impact, most people across the world understand that this specifically refers to the disaster which struck Valtia.

The destruction of Valtia is one of the largest cataclysms ever to occur on Micras in recorded history. Its consequences were severe and long-lasting, extending to the present day. The disaster was dramatic enough that it is represented in art across the world.

None of the inhabitants Isle of Valtia survived their island's destruction, save for a few families who left Valtia just before its destruction.

To this very day it is a mystery why Valtia was destroyed. It is a question that virtually no mortal dares to ask to those who know.

Several events warned of the impending catastrophe: two days before the disaster some immense columns of flame appeared, five days previously to that the animals on Valtia became unruly and all birds fled the island, and in the forthnight prior to the cataclysm fishermen complained that all fish seemed to have disappeared.

The cataclysm that destroyed Valtia was something the world had never seen before.

In the middle of the night when most people were sleeping tight, very shortly after the ships of the forewarned escapees had departed from the Isle of Valtia, all over the island innumerable volcanoes popped up like mushrooms and started erupting violently, fiery fountains spewing their leathal load of hot ash, molten rock, volcanic bombs, and toxic fumes a thousand feet into the air. Earthquakes of staggering power shook the entire island. Great rents opened in the earth, swallowing palaces, temples, halls, and entire towns. Lakes boiled or turned to acid, innumerable lava streams destroyed everything in their blazingly hot paths, and a rain of countless meteors and fireballs hailed down on the isle, all causing death and destruction beyond mortal imagination.

Subsequently, and virtually out of the blue, an angry and hungry tornado appeared which gripped the island and shattered it, while a monstrous maelstrom sucked the island's tatters down and scattered those pitiful shreds all over the bottom of the raging sea. All ships in around the Isle of Valtia's ports suffered the same fate. The massive tidal waves caused by the tornado-maelstrom, eruptions and earthquakes resulted in gargantuan tsunamis which struck many far away coasts.

The whole of the cataclysm took place within a couple of minutes. In that short time span the proud island of Valtia - home to mighty warriors and to sorcerers of unrivaled skill - was utterly destroyed and gone forever. The ancient, powerful Free State was gone in an instant, the fabled Viking empire vanished within the blink of an eye. The island's inhabitants didn't stand the slightest bit of a chance.

The House of Ettlingar Freyu escaped the disaster because the Lady Freyja had forewarned them and told them to flee to the Mysterious Isles.

Immediately after learning that Valtia is going to be destroyed, the Storjarla Ástríðr of Ettlingar Freyu - the Chief, Head and Matriarch of the House of the Desecendants of Freyja - started selling off her holdings in the Free State and on the Isle of Valtia and had her wealth brought over to the Mysterious Isles, a bleak archipelago in the Shipbreaker Sea. The Lady Ástríðr also had, as ordered by Freyja, two gargantuan longships built to take herself and her retainers, servants, siblings, kin, and children to the Mysterious Isles after performing a final ritual at the Great Temple just before leaving Valtia. Aforesaid ritual is to this very day performed by the members of the House of Ettlingar Freyu on the day of observance of the Froyalanish Ancient Ways which is known as End of Wonderment.

At its apex Valtia was the greatest place in the world, the center of civilization. Within the shining walls of Valtia City, twelvescore rival houses vied for power and glory in the opulence of court and council, rising and falling in an endless, subtle, oft-savage struggle for dominance. The Ettlingar Freyu were of pure Valtian blood, Falconlords of ancient lineage and also of Divine and Elvish origin. They were among the Great Thirteen, the most powerful of the Falconlords, and their rivals saw the preparations for their move to the Mysterious Isles as an act of surrender, as cowardice, and they were mercilessly mocked for it.

The Ettlingar Freyu though, had the last - albeit very bitter - laugh for shortly after their ships had set sail from their ancestral home island, the cataclysm commenced and the Isle of Valtia was annihilated.

What followed in the sudden vacuum caused by the destruction of the Valtian Free State was chaos.

With the heartland of the Free State destroyed, its surviving colonies re-asserted their independence and Valtia's globe-spanning empire quickly broke up into innumerable tribedoms, territories and petty kingdoms causing a series of savage wars for dominance between them as well as with other rulers and statelets who wanted a slice of the Valtian pie. The era known as the Centuries of Blood, the first part of the Age of Darkness, had commenced.

The House of Ettlingar Freyu made the Mysterious Isles their seat, a situation which lasted which lasted for almmost a millenium until the latter Days of the Old Tale. They managed to become chieftains again, but until Harald of Ettlingar Freyu embarked on the Conquest of the Heartland they were during those days not ever as powerful again as they had been as Falconlords in the Days of Valtia.

Another consequence of the destruction of Valtia was that many of its spells as well as much of its knowledge and recorded history were lost.

One day during their common-law relationship on the Mysterious Isles during the Days of the Old Tale when they were lying in each others arms basking in the afterglow of their love-making, young chieftain Harald had marshalled all his courage and asked the Lady Freyja the why and wherefore of the destruction of Valtia. That was the only time in all their years that Vanadís had ever frightened him.

The Lady of the Vanir became angry beyond belief. Only in a few instances in her millenia-spanning life had Freyja been angrier. Harald's attempt to escape Her wrath led to a wild chase in which She hurled countless objects and insults at him and the complete interior of his retreat on the Mysterious Isles was trashed. When Freyja had cornered him, she nearly killed him with a potent death spell. Harald, who had been trained by Freyja herself in Seiðr, which is Viking magic, noticed that She was reciting a death spell and narrowly escaped death by ringing a magic bell, ironically a gift of Freyja to him, bringing the Lady Divine to her senses.

Harald went on his knees and with sparkling eyes begged Freyja to forgive him for he had meant no insolence, but was simply curious. Her heart melted and She forgave her mortal lover. She also quickly undid the death spell, while sternly counseling him not query into the whyfor for Valtias Forlǫg ever again. She told him that as mortal all he needed to know that Valtia aimed too high, and that She would warn him would he ever do that. With a single spell Freyja also undid the damage to Harald's retreat and happily the mortal-Divine couple then returned to bed and that was the end of it.