The Imperial Charter of Shireroth (pre-2012) 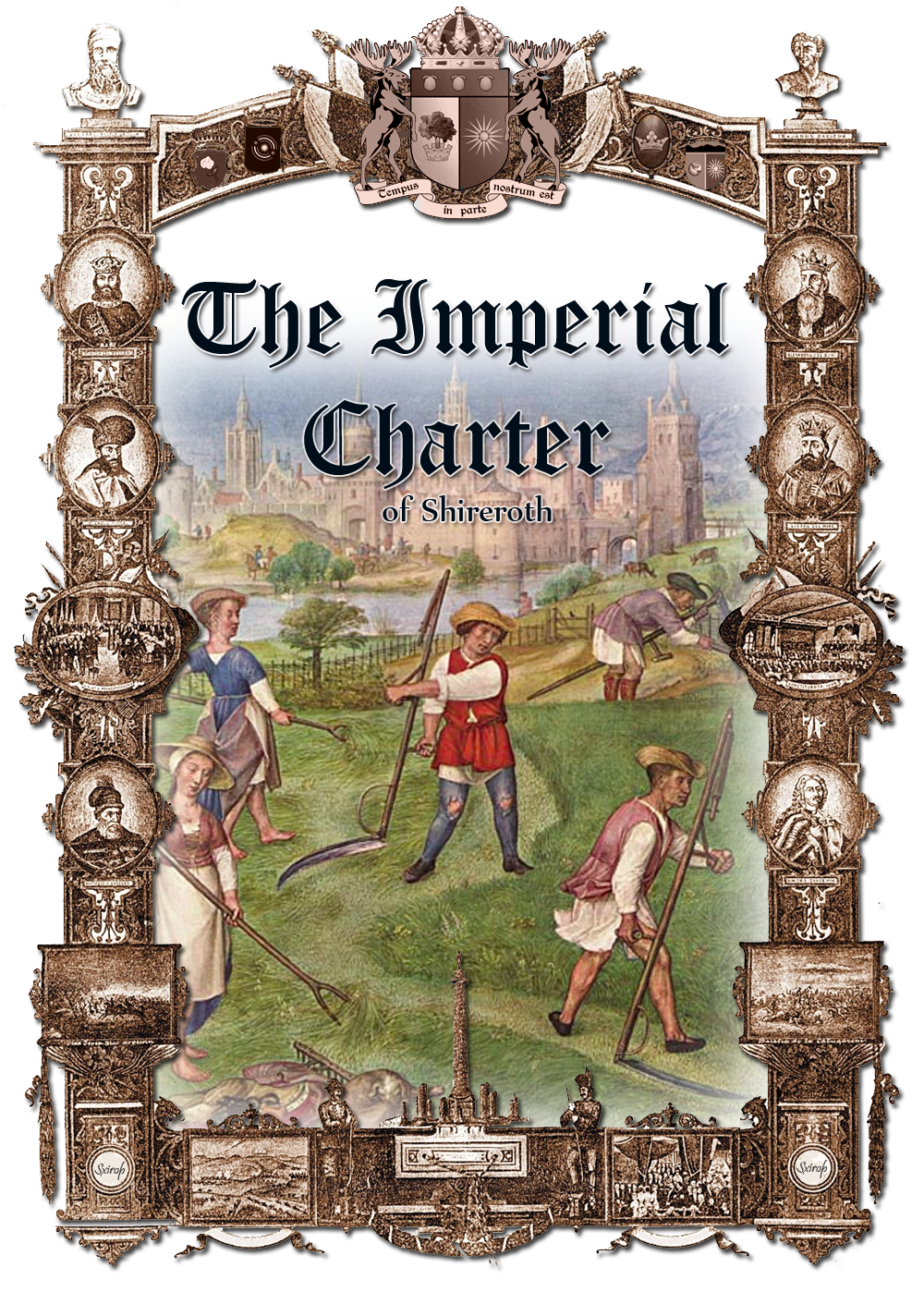 The cover of the Imperial Charter of Shireroth.

The Imperial Charter of Shireroth is the current name for what was formerly called The Constitution of Shireroth. The new name was adopted in order to avoid confusion with the Constitution of the United States of America. The charter can be amended by the Kaiser of Shireroth with the approval of the Prætor of the Landsraad and Arbiter, but only when a change is dubbed absolutely necessary. The document of late has also become known as the Mango Carta.

Article I: The Kaiser.

Section A: Definition of the Kaisership.

Section B: Powers of the Kaiser.

a. All supreme Executive, Legislative, and Judicial powers of Shireroth shall be vested in the Kaiser.

b. The Kaiser may make any decree regarding the operation, behavior, functions and policy of Shireroth, as well as any actions zie deems fit, as long as they do not violate this Charter, excluding situations laid out in h. below.

c. The Kaiser is the Supreme Commander of all Militia, Military, and any other armed forces within Shireroth or under Shireroth control.

d. The Kaiser may delegate zir powers to lesser officials known as Ministers.

e. All Imperial Law set down by the Kaiser shall be recorded in the Lawbook.

f. Any bill, act, measure, dictate, statement or order passed, issued by, or put before the Landsraad may be vetoed by the Kaiser for any reason, at any time. The Kaiser may vest others with veto powers over the Landsraad second only to the Kaiser.

g. The Kaiser may appoint or remove any Noble in Shireroth as zie sees fit except as noted in Article V below.

h. Should the nation suffer from inactivity, the Kaiser may suspend this charter for a period not to exceed ten years ASC during which time the Kaiser may rule by solely by decree. Inactivity is defined as 10 years ASC with less than 5 posts by Shirithian citizens.

Section C: Heir to the Throne.

a. Before the end of zir reign, the Kaiser must pick a successor from among the full citizens of Shireroth.

b. Should the Kaiser die or abdicate the throne, the Kaisership shall pass to zir successor.

c. Should no heir have been chosen, the successor shall be chosen by procedures laid forth in the Lawbook.

Section D: Restrictions Upon the Kaiser

a. The Kaiser may not use zir Landsraad veto on matters of voting percentages and procedures, or internal decorum within the Landraad.

b. The Kaiser may not remove the Praetor, or zirself be elected Praetor.

c. The Kaiser may not appoint zirself Arbiter of the Imperial Judex.

d. The Kaiser may not vote on matters concerning the revocation of a decree for violation of this Charter, nor may zie use zir power of veto on such matters.

a. In times when a successor is below thirteen years of age and there is no current Steward, a Steward of Shireroth shall be appointed by a majority of the Landsraad.

b. A steward shall be appointed by the Kaiser or Landsraad should the Kaiser take temporary leave of zir throne.

c. Should the Kaiser have no stated heir, the Steward shall become the head of Shireroth until a successor can be found. Should no Steward be appointed at this time, the Landsraad shall convene and elect one.

d. The Landsraad may elect a Steward at anytime it feels one is necessary, with the approval of the Kaiser.

e. The Kaiser may at anytime appoint or dismiss a Steward.

f. The Steward of Shireroth shall be vested with all the Executive, Legislative and Judicial powers of the Kaiser but may not repeal or amend Imperial Decrees of the current ruling Kaiser. When there is no Kaiser upon the throne the Steward may revoke or amend decrees of past Kaisers, but is bound by any citizenship restrictions on the Kaiser.

g. The steward is subject to all restrictions placed upon the Kaiser by the Charter.

Section A: Powers of the Landsraad.

a. The Landsraad shall be vested, through the good grace of the Kaiser, with legislative powers in Shireroth.

b. The Landsraad may set its own rules for membership, voting percentages and procedures, and internal decorum, without outside interference.

c. Neither the Landsraad, nor any body it creates, has authority or jurisdiction over the Kaiser or this Charter.

Section B: Sessions of the Landsraad.

a. The Kaiser has the power to dismiss, and recall to session, the Landsraad at any time.

b. Should the Kaiser die or abdicate the throne, the Landsraad shall be automatically called to session.

c. The Landsraad may dismiss itself from Session at any time.

d. If there is neither a Kaiser nor a Steward, the Landsraad is automatically called to session and may not dismiss itself until a Kaiser or Steward is on the throne.

b. The Prætor of Shireroth shall preside over the Landsraad as chairman. Zir purpose and duty shall be to call a meeting of the Landsraad to order, tally votes, close votes, generally manage, and keep order within the Landsraad; as well as keep records of all bills and resolutions passed during zir tenure.

d. The Prætor may not violate this Charter, Imperial Decrees, Landsraad Procedures, or the Lawbook.

f. If the Landsraad chooses, the last or present Praetor, instead of the Kaiser, may manage the election of a new Praetor.

Section A: Membership of the Adelsraad

a. The Adelsraad may set its own rules for membership, voting percentages and procedures, and internal decorum, without outside interference, except where this charter specifies unanimity is required.

Section B: Powers of the Adelsraad

a. The Adelsraad shall have the power to veto any law or resolution of the Landsraad.

b. The Adelsraad shall, by unanimous vote of the Dukes present and voting, have the power to revoke any decree of the reigning Kaiser.

c. The Adelsraad has the power to destroy and reshape Duchies as defined in Article V.

d. With the consent of the Arbiter and the Praetor, the Adelsraad by Unanimous vote of the Dukes present and voting may remove a Kaiser from the throne of Shireroth.

e. Should a Kaiser be removed in this fashion the normal rules for succession apply.

Section A: Powers of The Arbiter

a. The Arbiter of Shireroth is vested with judicial powers second only to the Kaiser.

c. The Arbiter may be dismissed by the Kaiser or a 2/3rd vote of the Landsraad.

d. The Arbiter will be the head of the Imperial Judex.

e. The Precise operation and powers of the Judex and the Arbiter shall be specified by the Landsraad.

f. Neither the Arbiter nor the Imperial Judex may violate this Charter, Imperial Decree or the Lawbook.

Section B: Special Powers of The Arbiter

a. The Arbiter may overturn any act or resolution passed by the Landsraad should said act or resolution violate Imperial Decree or this Charter. This power only includes matters of procedure if those procedure violate the charter. b. The Arbiter may nullify any order or decree of the Kaiser which violates this Charter. c. Other than those specified, the Arbiter has no powers over the Kaiser.

Article V: Rights of the Nobility

Section A: Subdivisions of Shireroth.

a. The usual primary subdivision of Shireroth is a Duchy.

b. The usual secondary subdivision of Shireroth is a Barony.

c. The usual tertiary subdivision of Shireroth is a County.

a. A Duchy may choose its own terms for itself and its subdivisions.

b. The Adelsraad may remove territory from a Duchy, or dissolve a Duchy by unanimous consent.

d. The Duchies shall have authority to regulate their subdivisions. However, anyone who has cause to show unjust treatment by a superior shall have the right to appeal to the Judex or the Kaiser.

Section A: Amending The Charter

a. The Kaiser may make amendments to this Charter at anytime, with the approval of the Prætor and Arbiter.

b. The Landsraad may make amendments to this charter by a 2/3rd majority at anytime, with the approval of the Kaiser and the Arbiter.

c. This charter may not be abolished, dissolved or revoked except as noted in Article I, Section B, subsection h. above.

d. All amendments to this Charter must be documented.