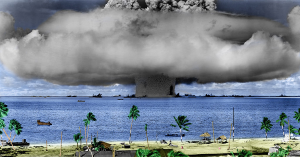 Operation Tymarian Sun was a pair of nuclear weapons tests conducted by the Imperial Republic of Shireroth at Ura'Bos in early 1641. They were the first Shirerithian nuclear weapons tests in modern times and the first non-Jingdaoese nuclear detonations since the Euran Holocaust in 1598 AN. The purpose of the tests was to investigate the effect of nuclear weapons on warships, and also to deter the population of dragons settled on Ura'Bos by Kaiser Raynor XII from spreading beyond the island that was set aside for their wildlife reserve.

A fleet of eleven obsolete or politically undesirable ships were assembled and anchored in the Strutter Roads on the eastern coast of Ura'Bos. These included the carriers IRS Inevitably Destructive In All Circumstances II and RSS Excalibur, the destroyers IRS Hovercat, IRS Blue Moose, IRS Guilds in Congress, IRS Raynor's Tree, IRS Bodyguard's Fate and IRS Lothlaria, the frigates IRS Brutus IRS Sparta and the IRS Thunder Child as well as the guided missile cruiser which bore the memorable moniker of IRS Silk and Leather Clad Chariot Girl. The fleet received the designation Imperial Order of Technomaezji/Imperial Navy Joint Task Force One (IOT/IN JTF-1). Every ship carried a full loading of oil, ammunition, and fuel in order to test accurately the viability of a warship subjected to atomic bombardment.

The exercise scenario for the operation was that the Batavian Royal Navy had sortied to support an invasion of the Skyla Isles as a precursor to the conquest of the islands of Amity, Mirioth, So-Sara and Yardistan. With both the Western and Eastern Armadas overstretched trying to contain the rampaging unrestrained submarine warfare being waged by the Imperial War Fleet, the MoMA was obliged to resort to strategic bombardment by the Imperial Shirerithian Air Forces (ISAF) to restore deterrence and avert world war.

The tests were to be observed by a carefully vetted invited audience, including a large press corps, which assembled at the ESB administered colony on the island's southern coast. Live communications and reporting from the site were however prohibited and subject to an embargo while permission to make a public announcement concerning the tests was sought from the Imperial Advisory Council.

Two B-66 Vulcan heavy bombers of No. 1 Squadron of Bomber Command conducted two simultaneous test strikes on the vessels anchored off-shore. The first, a implosion-type nuclear weapon with a solid plutonium core, was released as an unguided free-fall depth bomb which detonated 27 metres underwater, with the Inevitably Destructive In All Circumstances II serving as the aiming point. Ten ships were sunk and the remainder were drenched by a giant pillar of water described as a broiling devil's brew of radiation. No identifiable part of the Inevitably Destructive In All Circumstances II was ever found and it was presumably vaporised by the nuclear fireball. The RSS Excalibur sank 7.5 hours after the underwater shock wave opened up leaks in the hull. Immediately after the shock wave passed, the water wave lifted the stern 13 metres and the bow 9 metres, rocked the ship side to side, and crashed over her, sweeping all five tethered helicopters off the flight deck and knocking the stack over onto the deck. She remained upright and outside the spray column, but close enough to be drenched by radioactive water from the collapsing mushroom plume as well as by the base surge. Radioactive debris was thoroughly mixed with the two million tons of spray and seabed sand that were lifted into the spray column and then dumped back into the off-shore waters. Most of was carried out to sea by the tidal and wind-driven currents, however a significant portion of the irradiated spray fell onto the eastern coast of the island.

The second test was conducted against the abandoned privately owned battleship YMS Kaiser Mors V (Exercise target name: Melisande) after its location, concealed some manner of cloaking device in a cove on the northern coast of Ura'Bos, was ascertained. The selection of this target was to test a number of improbable claims made by the highly erratic Kaiser Raynor XII - such as a corrosion proof bonded molecular structure and the small detail that the ship was allegedly crewed by dragons, who remained its custodians and guardians in the absence of a Loki claimant.

The second bomb detonated 158 metres above the target cove with a yield of 23 kilotons. The bomb missied its aim point by 700 metres, detonating over the island, and for this reason the heavily built and heavily armoured warship proved difficult to sink. As it was, there remained significant blast damage to the ship superstructure.

The fallout from the two tests, including an amount of unfissioned plutonium, reaffirms the status of Ura'Bos as an island unsuited to human habitation. The ESB colony on the southern coast remains based on off-shore facilities and relies entirely on imported foodstuffs and a local ban on fishing in the area has been imposed.