The Confederate Rianates of Lemuria (formerly Empire of) is the most recent nation in the long line of SanderNations. It has had a varied history. Formed after the fall of the second incarnation of Feianova, it joined the Grand Commonwealth upon its formation in 2005.

On February 1, 2006 Lemuria seceded from the Grand Commonwealth, being the first nation to do so. This secession was followed up on February 2nd by the shocking news that the Ramu of Lemuria had been assassinated by radical Lemurians unhappy at Lemuria leaving the Commonwealth. The nation descended into anarchy, where it was split into three fragments, Táixxarin, Réixavin and Rechain.

Nine Hundred Years later (6th February 2006), the three Ramus of the seperate divisions united to reform the Lemurian nation as the Confederate Rianates of Lemuria.

Lemuria was founded for the first time in July 2004 as the Empire of Lemuria. Like most SanderNations it thrived for a few months, but then fell into inactivity. However, founder Sander Dieleman had promised that Lemuria would be "eternal"; it would never cease to exist. To keep this promise, and also to preserve its heritage and MCS land, Lemuria joined the Grand Commonwealth.

This pre-GC incarnation of Lemuria is often dubbed "Ancient Lemuria". Its government and culture differed considerably from that of today's Lemuria. There was a single ramu with the power to unilaterally issue decrees, and a Council of Elders which consisted of all citizens. It could create and pass legislation without the ramu intervening (today, all Lemurian legislation must be decreed by a ramu) and repeal his decrees. Ancient Lemuria had a ceremonial language, Lemurian, which has almost nothing in common with today's ceremonial language, commonly called Lembrin or lhemvrin eitherial to differentiate between the two.

As previously mentioned, Lemuria was already largely inactive when it joined the Grand Commonwealth. In addition, ramu ségirdair I (Sander Dieleman) retired from micronationalism not long after the merger. He was succeeded by ramu taiçardainre I (Lachlan Powers). 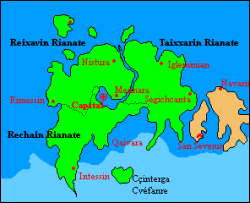 A map of Ancient Lemuria on Micras

When Sander returned to micronationalism, he wanted to bring Lemuria back to life. It was decided that this would best be done outside of the GC. This way, Lemuria became the first nation to have seceeded from the GC. Six people, Ciaron Broeck, Peter Clark, Sander Dieleman, Eddie Guimont, Lachlan Powers and Andrew White, plotted in the darkness and opened the modern Lemuria to the public on February the 6th, 2006.

By March 2006, things had already gone considerably quieter. Some people were suggesting that Lemuria rejoin the GC. However, this motion was turned down by most of the Lemurian populace. Over the course of July, August and September 2006 Lemuria seems to have been gaining some activity again, in addition to a few new citizens.

Nobody really knows wether pre-GC and today's Lemuria are actually the same micronation. There are a lot of cultural and political differences, and the citizen base is considerably different. Usually this is used to the advantage of the Lemurian government. For example, when establishing diplomatic relations with Shireroth, which refuses to recognise nations that are under 3 months old, they were considered the same.

On 27 August 2007, following a forum failure three weeks prior, Dieleman announced, via Micronations.net, that Lemuria was officially inactive for the forseeable future.

Lemuria is divided in three Rianates (from riana, Lembrin for "empire"), each represented by a ramu (emperor). These subdivisions, called Rechain, Réixavin and Táixxarin, are mainly cultural, but also political to an extent. Lemuria's government could be described as a reverse democracy. There are two legislative bodies: the Concilium and the Triumvirate Council.

The Triumvirate Council consists of three ramus, each representing a rianate. Each ramu has the power to issue decrees unilaterally, which go in effect immediately. This effectively makes Lemuria a dictatorship. Ramus may also issue decrees together, or sign decrees issued by other ramus if they wish to express their consent. The Council as a whole may veto any decree.

The Concilium constists of all non-probationary citizens that are not ramus. Each member of the Concilium may put forward legislation that he would like to see decreed. After the debate, a ramu may decide to decree the piece of legislation immediately, or wait until a few other Concilium members have voice their support for it. This is called a "decree upon the advice of the Concilium".

Chambers and Lords are Lemuria's equivalent of ministries and ministers respectively. Each Lord is responsible for the management of a certain aspect of government, and receives the power to issue decrees concerning this aspect. The Lord of Diplomacy, for example, has the power to decree treaties. Decrees issued by Lords are called "delegated decrees" and maybe vetoed unilaterally by any ramu.

Currently, the Triumvirate consists of: