Foibles of the Unbelievers 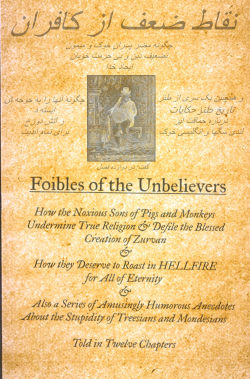 Original Title Page to the 1550 edition of Foibles of the Unbelievers, including its extended title.

The Foibles of the Unbelievers is a Babkhi satire on the Elw, the Hyperboreans and others amongst the Twelve Peoples of Elwynn first published anonymously in 1550 during the upheavals of the White Lily Revolt. The attitude of the author in this work is uniformly scathing and visceral in regards to the indigenous population and the other ethnic communities in Elwynn whom the Babkhi could observe on a day to day basis. It is no coincidence that the book first appeared a mere seven years after the Kai Aphmyarkaiph destroyed the political power of the Babkhi and marked the nadir of the community's prestige and fortunes.

It was first provided with illustrations in a series of plates engraved in 1563 by a certain Walaam Hog-Arthion who was, ironically enough, an Elw. The scenes Hog-Arthion chose to illustrate had less to do with the overt racism of the original Babkhi text than it did the endemic corruption of late high feudalism in Shireroth during the reign of Kaiser Mors VI when the House System was widely regarded as a direct attack on the well-established sense of Elwynnese nationality - something that would, by 1567, blossom into a full blown independence movement. 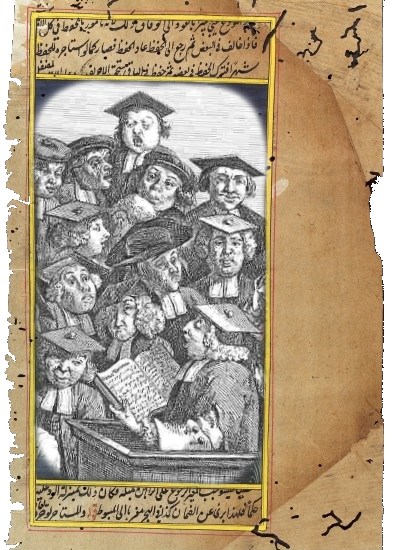 Elw Kuffar Academicians: Attentive and Full with Learning - from the set of engravings included in the 1563 edition of the Foibles of the Unbelievers.

The shameful flight of the Ardashirians - their crimes and follies

The cruelties of the Elfinshi and other underwood creatures

A Treesian crashed his glider into a cemetery, the pilot survived but the Ard-Baron's men are still digging up bodies at the crash site

The ingredients of Treesian Red, the most noxious and hateful drink known to mankind

The art of drinking Treesian Red, the most delicious narcotic wine known to mankind. Beloved of Satraps everywhere