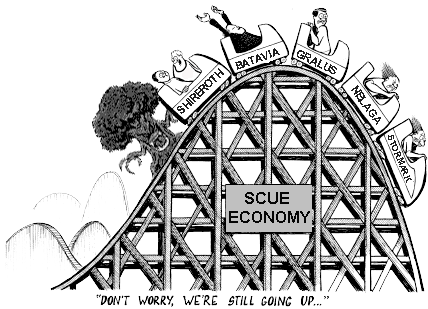 Shireroth's economy isn't doing that bad as some people dare to say... at least we have still some activity.

The erb is the national currency of Shireroth. Around the foundation of Shireroth in 2000 the symbol € (Euro) was adopted for the currency, but no formal name was given to the erb at that time. In ancient times, the erb was backed by copper, but it has since become a type of fiat currency, backed by the power an prestige of the Imperial Republic.

During the Seventh Republic, Lukedu using the 'E' shape of the erb as inspiration came up with the name "Erb". This led to some joke about the "hERB" and some other jokes about marijuana, which have been forgotten. The original and technically correct spelling is €rb, incorperating the symbol into the name of the currency. This use has lost popularity due to the annoyance of having to type in the ASCII code to create the symbol or for some the inability to create the symbol on their systems.

The ASCII code to create the Euro symbol (€) is Alt-0128 on windows machines. Some fonts do not support this symbol.

In 1543 AN, a new series of notes was designed by Yvain Wintersong of Ynnraile. Each depicted one of the Shirerithian Duchies of the time - adorned with the portrait of a prominent ruler, the quote of an elder, and a picture of an architectural feature from each. They were denominated in 1, 5, 18, 29, and 100 Erb in the finest traditions of Yvain's erudite smartassery (it was apparently the most statistically convenient method of denomination possible):

The notes were subsequently withdrawn, declared to be heretical, and pulped.

Some crude subsidiary coins were issued at the same time, designed by Krasniy Yastreb of Lunaris. 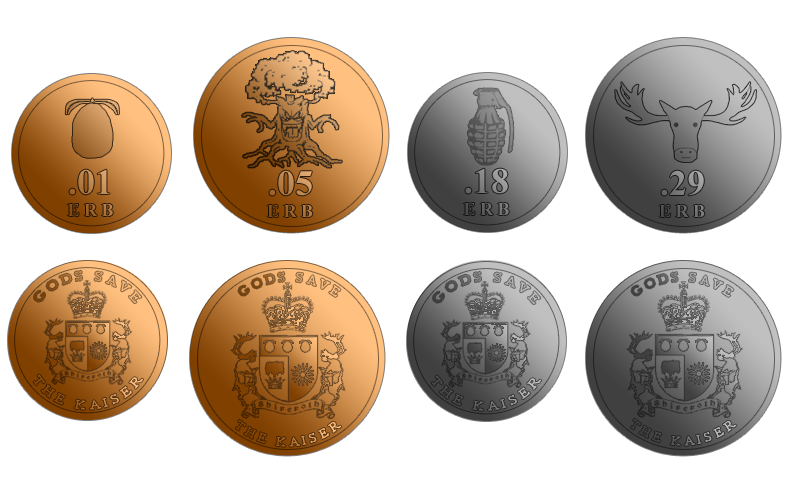 In 1574, with the ascension of Gaelen IV to the Throne, a new coin was minted. The Kaiser, who wanted to make himself a bit more popular to the masses distributed golden coins of a value of 10 erb during the procession over Kaiser's Boulevard.

In 1608 AN MiniTrade Ryabin Merkayastreb issued a new series of Erb notes, this time denominated in the more conventional 5, 10, 20, 50 and 100. These were well received by everybody except the man who mattered: the reigning Kaiser Trantor IV who slammed the design and suspended its introduction. There then followed a period of extreme butthurt on the part of Ryabin who resigned his Ministerial office in exasperation, making the Kaiser even more unpopular than he already was and indirectly leading to Ryabin's election by the Landsraad as Kaiser Mo'll I. Due to this, the planned series of coinage to accompany the 1608 issue was never designed. The notes however were quietly introduced into formal circulation by the re-animated Kaiser Mors IV.

Each note in the issue focused on a region of Shireroth. 5 Erb for the Benacian Archipelago, 10 Erb for the Eastern territories, 20 Erb for Northeastern Benacia, 50 Erb for Southern Benacia, and 100 Erb for the Imperial heartland. One one side was depicted a notable Kaiser from the region, and on the other a person of common occupation.

The notes were designed with the assistance of the Assayers of the Avakair Mint, whose watermark and cyptic code can be seen on the reverse of each note. 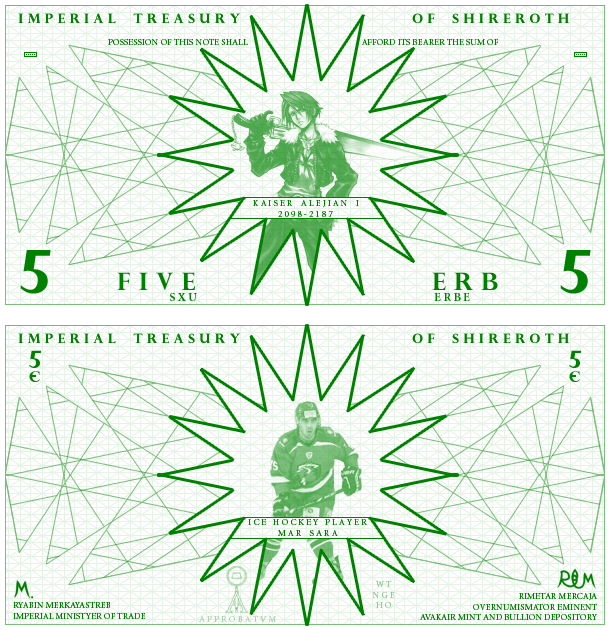 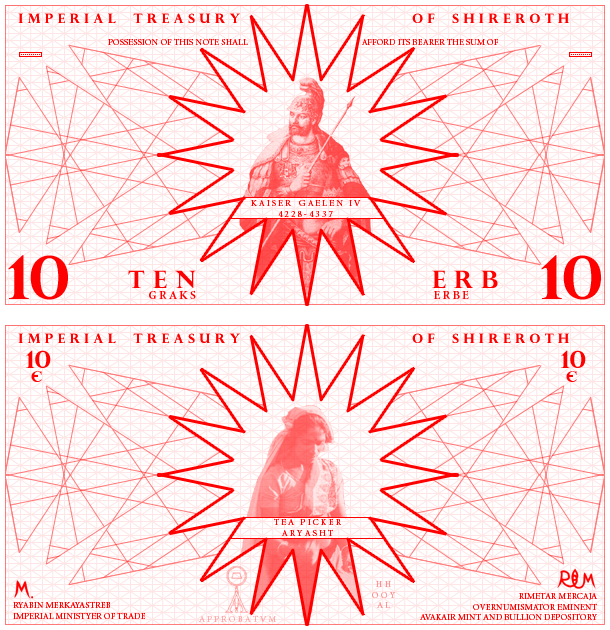 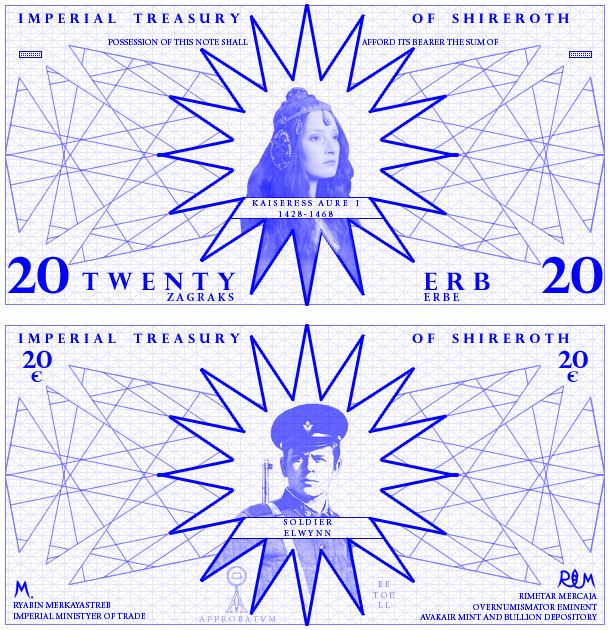 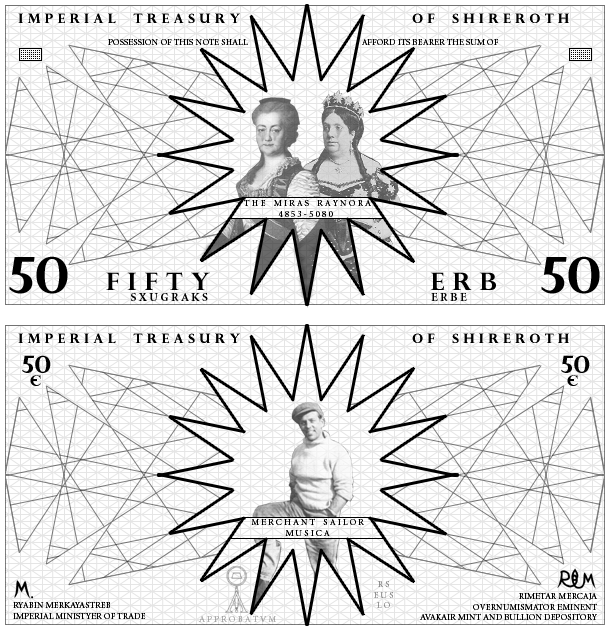 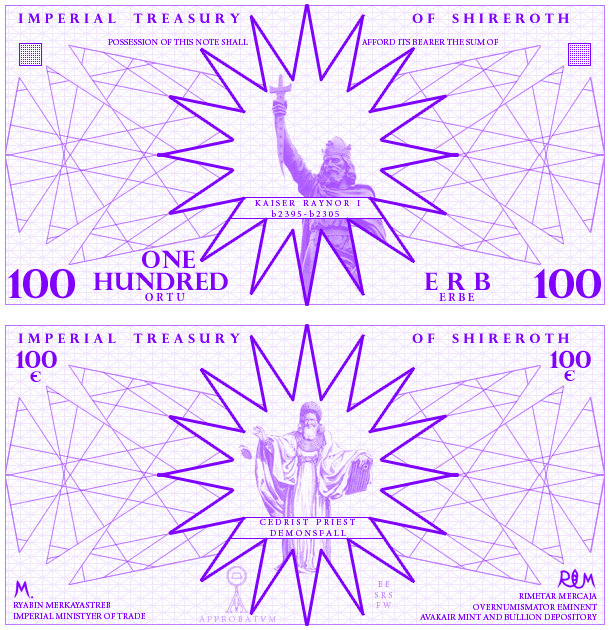