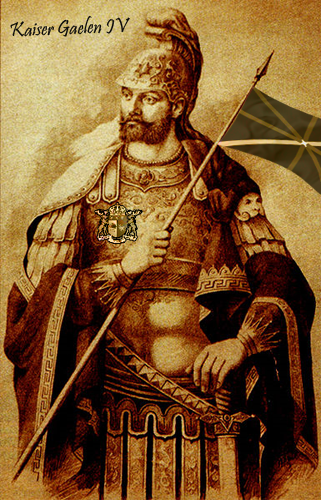 Kaiser Gaelen IV of the Noble Line of Win'Eth was the successor of Kaiser Magni I and ascended the Throne in 1574.

He was the second to be burried in the Valley of Mors but the first who had an impressive tomb.

The choice for the name Gaelen was not accidentally or because it sounded nice. It refers to the big examples of the Kaiser: Kaiser Gaelen I, who made Kildare a part of the Shirerithian Empire. And because Jonas / Gaelen is a Kildarian, it was an easy choice.

Ascension of the Throne

With much pomp and circus Gaelen entered Shirekeep in oldfashioned Apollonian clothes (a tunica, armor and helmet). With this he wanted to show that even the local cultures of faraway regions of the Empire can be used by Kaisers.

Before his coronation started, he did a procession over the Kaiser's Boulevard from the city gates towards Raynor's Keep. After the coronation, he went to the House of Sakat to honour the God of Time.

During his coronation, Gaelen spoke to the people and presented them some of his future plans for the Empire: 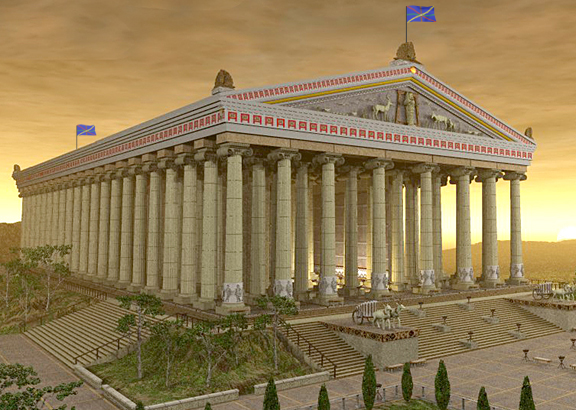 Immediately after His coronation, Gaelen went to the House of Sakat to pray to Sakat.

That I’m standing here today in the Throne Room of Raynor’s Keep, the home of a long line of Kaisers, is the living proof that we have succeeded in protecting ourselves against foreign threats. Some people and nations would have preferred to see us death, for whatever reason that could be. But we have shown that you can’t destroy the soul of Shireroth and its citizens that easily. Not even by trying to get the Empire split. Yes, we lost Elwynn. Yes, we lost Straylight. Yes, we had a tough time with chaos and disorder. The streets were empty, the fields had become nothing more than easy targets for scum and rebels to plunder. Many had lost hope, even in our traditional Duchies. We saw the Goldshirian, Brookshirerithian and even the rebellious Yardistani dynasties fall one after one. Despair had even reached the Imperial Counties and some people, not only in the dark alleys, were speaking about the possibility of protecting our Empire by replacing it through an independent Kildare which would protect our heritage. As I said: history – thank Sakat for this!- seemed to have other plans for us. We didn’t fall. The Kaisers restored order and the Elwynn secession happened quite peaceful after a period of unrest. These people are, of course, still our friends. Actually, more than friends: they are family. There is no doubt that they would be welcomed back into our society when they want it. I have serious doubts that they would accept such an offer, but only time can show us what will happen.

Now, it’s perhaps not a bad idea to give some information about what I want to reach during my reign as Kaiser. Institutional changes are as good as finished with the creation of the Adelsraad (alright, we still need to legally sort it out, but that’s just a minor thing), the Landsraad is functioning and the Duchies are once again split into three camps.

That’s why I think that it’s time to do what so many people have shouted for: I’m gonna seek for the Shirerithian culture. To be more detailed: I want to make it my top priority to gather all old works from influent Shirerithian authors and publish them in pdf-files. For some works (I’m thinking of the story which Scott wrote for 10 years Shireroth), I would even like to add pictures which should make the stories even better looking. You could call my goal: a Recovery of Our Ancient Culture.

Next on my list is further developing the religion. There were some debates about (new or) uniting religions. I’m going to focus on developing the dominant religion and on the creation of an Imperial Cult. While the Kaiser will be seen as a representative of the Gods on Micras, he isn’t a God. This only happens with some of the Kaisers after their death.

The Kaiser will stand for Stability. Without Him, there is the imminent threat of a collapsing society and chaos. Our older stories could easily be integrated into this newer theory: the Sword of Fire (first used by the Khaz Modan and thereafter having been lost for centuries) was given to Raynor I as a present from the God Mors himself. I will not make it a secret: I hope to unite Cedrist and Soloralist religions into one religion. I’m not sure this plan will receive the support I want it to get, but I can only try to develop something.

For this all, I also plan the creation of new temples throughout the Empire to spread the words of the Imperial Cult and our Belief. Next to that, to the north of Shirekeep, in the mountains, a certain valley will be called the Valley of Mors. From now on, Kaisers will be buried in the tombs in this Valley. Their body will be directed with their feet to the northwest (the only direction that isn’t protected by the Elwynn river) and with their head to the southeast. That way, the spirits of the dead Kaisers will become the (spiritual) protectors of Shirekeep (and the Empire), who can travel between the Celestial Temple and our world.

A temple complex near the only entrance of the Valley will be build: Sakatopolis. Here will the dead Kaisers be greeted and honoured for a last time. In normal cases, the dead Kaiser will be transported from Shirekeep to Sakatopolis, so the peasants can also bring a last greet while the Kaiser passes their farm fields or villages.

Golden coins, minted in and with gold from Novi Dalmacija.

Kaiser Gaelen took a flying start and took immediate actions to wake up the cultural and religious life within the Imperial Republic. The traditional army soldiers who were used as the bodyguard of the Kaiser were replaced by the Apollonian Guard. To celebrate his ascension to the throne, Gaelen minted a new golden coin with his face on it and the coat of arms of the Empire and distributed among the people of Shirekeep.

The Kaiser tried to revive religious life by establishing the Imperial Cult, in which the Kaiser gets worshipped as a demigod according to the Principle of Stability, and by opening the Valley of Mors by which he hopes to develop more (religious) traditions around the death of a Kaiser.

Politically, the biggest job the Kaiser has done, was rewriting and updating the Imperial Code of Law, which was made by Kaiser B'Caw I. The new Lawbook foresaw the creation of the Adelsraad, a veto council of the Dukes to limit the powers of both Landsraad as Kaiser, and officially opened the Landsraad to all nobles (which since Kaiser Ometeotl I had only been the case in practice, but not on paper).

In the end, however, historians and people alike have judged the merits of Gaelen's kaisership mainly by his choice of successor, Giles Melang, which understandably brings the kaisership under much bad light.