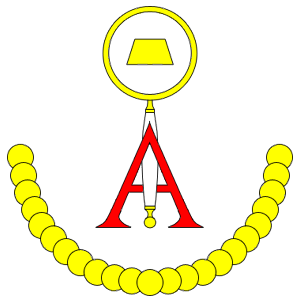 If you get a letter with this on it, your troubles are only just beginning.

The Assayers - or more formally, the Chamber of Assay of the Avakair Mint and Bullion Depository - are an organisation founded to maintain the quality and reliability of currency and precious metals passing through the mint at Avakair, Ynnraile - which traditionally holds the Imperial contract for the production of Erb. Over the years its activities have expanded to reach far beyond its original remit, to the point where it resembles something between an intelligence agency and an organised crime syndicate defying all attempts at regulation.

The Assayers came into their current form during the Avakair Mint's rise to Imperial prominence during the rule of Baron Yvain Wintersong of Ynnraile. They were taked with overseeing the rigorous quality control regime for the production of Erb, and granted wide-ranging powers to do so. The first Committee of Assay was populated by the precious few experts in currency found in the then-defunct Goldshire, almost all of whom came from a single family: the Mercajas, famed as the ruthless Treesian merchant clan whose rule had once extended over all Goldshire - and whose power had worried the Gods enough to forge the Sword of Vengeance to contain them. After the Mercajas' humiliation at the hands of Raynor Me'Jiliad and the absorption of their Goldshirian realm into the newly-founded Shireroth, the family's remnants sank into obscurity for millennia - quietly accepting the supremacy of the Cedrist Gods who had arrested their rise, and returning to the pursuit of finance and trade from which they had come. It was their descendants who were cautiously rehabilitated by the Avakair Mint, to utilise their ancient skills and safeguard the Mint's reputation.

The Assayers used the old Mercaja cunning to further its bureaucratic aims within the Mint; first ousting all non-Mercaja appointees from the Committee of Assay itself, then slowly taking control of the management of the entire Mint. Their methods were decisive and discreet, with all who so much as murmured opposition simply disappearing off the face of Micras without any conclusive proof leading back to the Assayers themselves. Those wiser souls within the Mint learned to co-operate with the Assayers at every turn, not only to achieve their own aims but to preserve their lives.

At this point the Assayers' sphere of dominance began to creep from the Avakair Mint itself to the nearest organs of government, and the focus of the Assayers' efforts expanded from simple currency control to furthering the interests of the Assayers themselves. While the Assayers' appetite for political involvement had been irrevocably damaged by Raynor's defeat of the Mercajas, those areas immediately concerning them were gradually made "safe" for their operations. The authorities of the City of Avakair soon learned to receive the Assayers favourably, otherwise key clerks and officials would begin to go missing.

The Assayers' capacity for intelligence gathering had begun as a network of informers in the financial profession. Soon it rapidly expanded into a cadre of active agents doing its bidding in the Avakair area, as well as key Ducal offices in Goldshire and even the Imperial Ministry of Trade. This talent caught the eye of Goldshire's Dukes, who realised the Assayers were considerably more accomplished in the field of espionage then their own agents. Thus began an uneasy relationship between the Duchy of Goldshire and the Assayers. A gentleman's agreement was established whereby the Assayers would provide the Duke with valuable information on request, and in return the Duchy would turn a blind eye to certain extralegal activities of the Assayers. The agreement was entirely unwritten and subject to frequent re-interpretation by both sides. It would frequently break down when Goldshirian authorities sniffed around the Assayers' interests too closely, resulting in the disappearance of key Ducal officials and the cessation or adulteration of the Assayers' intelligence reports to the Duke. The information remained essential however, and the relationship continued.

Perhaps the most serious schism between the Assayers and the Duchy was the forced suicide of Duke Krasniy Yastreb of Goldshire in 5222 ASC and his replacement with his illegitimate son Ryabin, who by virtue of a tenuous Mercaja bloodline had been adopted by the Assayers and schooled as one of their own. But despite his strict education, Ryabin's loyalty to the Assayers was broken by an Imperial currency scandal during the reign of Kaiser Trantor IV, and the Assayers' subsequent torture of Ryabin in the cellars of the Avakair Mint. Fortunately the greater blame for the affair fell on Ryabin's uncle and promoter Rimetar Mercaja, who was forced into suicide while Ryabin was released from the employ of the Assayers and effectively disowned from the Mercaja dynasty. Only his position as Duke of Goldshire, deemed useful by the Assayers, prevented his own demise. Since the Trantor Affair the Assayers have entered a period of semi-dormancy, seemingly preferring to develop their existing spheres of dominance rather than establish new ones.

The Assayeers' hierarchy is formalised into the following structure, a relic of the Avakair Mint's pre-Assayer days:

Asset of Assay - the informants, low level 'plants' in government institutions, and menial workers. Generally of non-Mercaja blood, kept loyal through a combination of bribery and threats.

Officer of Assay - act as handlers of the Assets or bottom-tier managers. Usually of weak Mercaja blood, although occasionally a meritous non-Mercaja will be promoted to this rank.

Undernumismator - an apprentice rank, usually attached to a Numismator Ordinary and taught the latter's craft. This process can take many years.

Numismator Ordinary - Runs key departments within the Avakair Mint or manages important operations in the field. Easy scapegoats when things go wrong and suffer limited lifespan as a result, unless blame can be passed to an Undernumismator.

While Assets are made to do the Assayers' bidding by threats and bribery, all other ranks undergo a prolonged period of instruction and indoctrination at the Avakair Mint, usually beginning from an early age. Here, no matter what their personality or temperament on joining, they are moulded into individuals who would be considered utterly dull, devoid of jollity or humour, and clad in smart but featureless formal suits. They are expected to subordinate all family and social commitments to their work for the Assayers, and indeed to incorporate said family or social circle as Assets. All contacts of no use must be shunned.

Despite their boring nature, Assayers' training in sharpness of perception and tactical thinking results in an extremely sarcastic outlook which is only tempered by their general dourness. It is said that nobody can outwit an Assayer in conversation - and the harder one tries, the harder one will be verbally humiliated. Assayers are also notoriously unwilling to divulge information to anybody except for higher ranked Assayers - answering a question of any kind from anybody else is considered an extreme faux-pas, even if it is something innocent like "How are you?" Doing so is seen as an act of degrading capitulation. This means that junior Assayers must work only on their orders without seeking clarification, relying on guesswork and initiative to fill in the gaps in their instruction. This is considered an essential part of an Assayer's development, and those who guess wrongly too mnay times will generally meet with severe punitive measures.

A graduated Assayer is issued a small, golden magnifying glass to be carried on them at all times. The loss or damage of this glass is an extreme offence punishable by instant termination by the methods described below.

The Assayers, by gift of their ancient craft, are experts in metallurgy, chemistry and microscopic engineering. These disciplines are often applied outside of their usual domains, such as the "testing" of wayward Assayers or interrogation subjects with variable concentrations of mercury, aqua regia or molten lead, applied both internally and externally.

Those individuals deemed irreconcilably problematic by the Assayers (obstructive bureaucrats, for instance) are quietly stalked until such time as they can be discreetly removed to the Avakair Mint, whereupon they are "tested beyond use" by the methods given above, with their remains being dissolved in acid and disposed of as chemical waste.

Those of previously honourable standing requiring termination (nobles, the wealthy, or high-ranking Assayers themselves) are generally aproached during their usual business and offered a suicide pill, with a gentle instruction to use it. If they refuse, they are dealt with by the standard method.

The specific motivations of the Assayers are a mystery, and vary according to the dominant personalities on the Committee of Overnumismators at any given time. The tendency is to feel gently for greater influence and power until they court too much public controversy, then withdraw to the shadows and explore a different route. Despite the passage of untold aeons, the ancient humiliation by Raynor and his attendant Gods inspire caution in the Mercajas and their organisation to this day.