The County of Sunderspray is one of the subdivisions of the Duchy of Straylight. Sunderspray consists mainly of the remnants of the Pennà, the people who formerly dwelled upon the Isle of Benacia prior to the destruction wreaked by the detonation of the Sky Pillar of Tunè.

The Pennà, also known to themselves as the People of the Sea, the People of the Isle, or the Great Flotilla, and more commonly in Shirerithian English as Sundersprites, are sea-dwellers, like other Straylightians; but rather than dwelling in the city-like sancts, travel in smaller tribes or clans upon more conventional ships, subsisting on seafood, trade, and no small amount of smuggling. They are only loosely organized above the ship level, bound together as a whole by only a minimal set of laws, and a somewhat greater body of habits and traditions.

Geography and Points of Interest

The majority of the Sundersprite population live aboard ships and boats of various sizes. As a result, Sundersprites as a group are highly mobile, and there few fixed habitations and no defined boundaries whatsoever. Describing the geographic extent of the County, therefore, is difficult, if not actually impossible.

Subsisting largely on trade, Sundersprites can be found in small numbers all over the world; but the majority of them live in a V-shaped region extending from the mouth of the River Elwynn and the coast immediately south, to Amity and the Isle of Yardistan, to the southern coasts of Novi Dalmacija, with another concentration of in the Khaz Modan Isles, and a less powerful presence throughout the Straylight Sea, the western coast of Kildare, and down to the western coast of the Isle of Istvanistan. 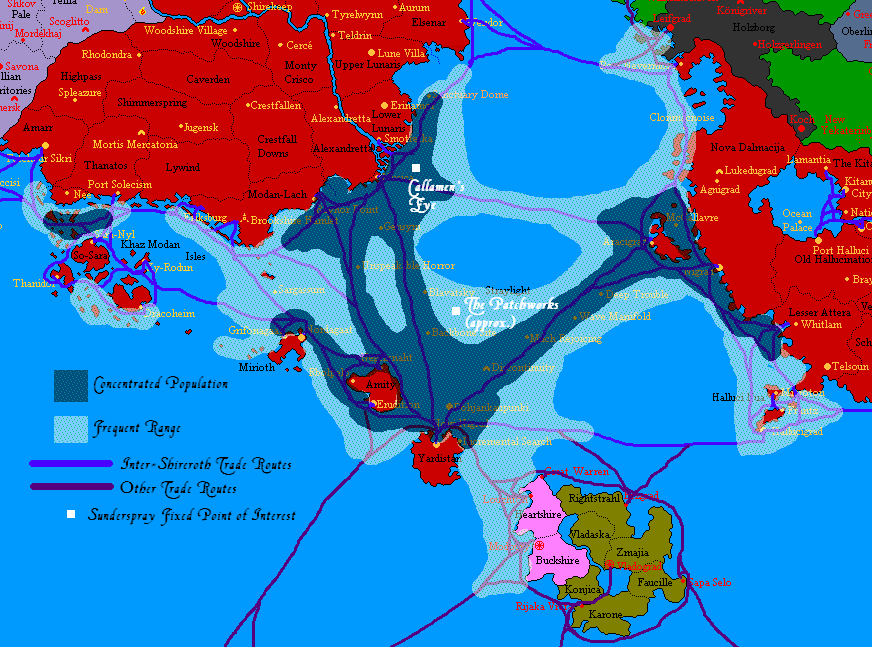 This range is, to a large extent, coextensive with the area populated by the sancts of Straylight. This is due in part to the fact that the sancts are already strung out along major trade routes between land-based ports, and due in part to the fact that the sancts themselves are frequent destinations, and sometimes even semi-permanent bases, for Sundersprite ships. Although many Sundersprites have strong superstitions about setting foot on dry land for any length of time, the sancts attract no such mistrust. Many young Sundersprites attend receive their high- or even middle-school equivalent education in sancts, and almost all of them wishing to attend college (a fairly small proportion) will do so at a sanct, generally Gensym or Discontinuity.

The types of ships inhabited by the Sundersprites run the gamut, from single-family fishing boats, to tankers housing several families, to decommissioned aircraft carriers capable of carrying several thousand people, all mostly on the move. However, there are two semistationary locations, referred to as ships for the purposes of the Sundersprites but probably qualifying as small sancts in their own right.

The first, and best known, is the ship Callamen's Eye, the de facto capital of Sunderspray. Located off the mouths of the Elwynn, this modular multiple-spar floating platform contains the minor administrative apparatus of the County's day-to-day operations, and more importantly, is the meeting place of the Great Flotilla's biannual Assemblies, and the far less frequent Great Assemblies. The Callamen's Eye is anchored in the waters where the Pact of Abjuration was first signed, signaling the beginnings of Sunderspray as an entity.

The other, far less known to outsiders, is generally referred to as the Patchworks. Not so much a single ship as a small fleet, the aptly-named Patchworks functions as a sort of ramshackle mobile repair yard and bazaar. Its technophilic inhabitants contitute a distinct subculture of their own among the Sundersprites, and as such are considered odd, even puzzling, by their countrymen, although in many of their most fundamental customs and practices they remain the same.

The Isle of Benacia had been the home of the Pennà for eons, but the story of their exile began in the reign of Mors IV Nerrolar, during the brief rebellion of 2064 that had claimed the Kaiser's life. Although the rebellion was crushed, it drove a lasting wedge of simmering anger between the isolationists who sought to preserve their traditional power and culture, and the modernists who sought to integrate Benacia into Shireroth's greater society. Violence erupted sporadically between the two sides over the following centuries, but was held in check by the guidance of Count Shyriath and the might of the Imperial military.

But by the mid-third millennium ASC, Imperial attention had begun to turn away from Benacia and other outlying lands as troubles increased in the Shirerithian heartland. The interruption in 2538 of the reign of Meskan II by the usurper Nicodemus prompted a temporary withdrawal of the army from Benacia, and the local militias (often themselves taking sides) were unable to deal with the riots that resulted. The return of a reduced garrison after the restoration in 2543 briefly calmed the situation by driving the rival militias from the towns, but by 2546 the warring factions had instead spread across the countryside, looting the coastal villages and burning farmsteads. The great herds of the callamen were decimated, and famine stalked the land, just as the aftermath of the usurpation had disrupted food supplies on the mainland.

The following year, 2547, saw the transition from pillaging to outright conquest, as the militias began seizing permanent control of the island's poorly-defended villages and the Count's loyal troops were forcibly recruited, deserted, or killed. The marshy western half of the island came under the control of the isolationists; the somewhat more densely-populated central and southeastern portions were ruled by the modernists; while only the eastern and northeastern coasts, with their major towns, and the adjacent highlands remained under the authority of the Count. The rebel factions fought each other and the Count increasingly fiercely in the area around the highlands, each hoping to gain control of the powerful and mysterious Khaz Modanian artifact known as the Sky Pillar, and the skirmishes evolved into a lengthy three-way battle in the fields immediately around the base of the Pillar itself.

Who caused the destruction of the Sky Pillar, and how, remains unknown to this day; but the few remaining eyewitness accounts agree that there was a detonation of the advanced machinery at the peak of the tower, followed by secondary explosions, the appearance of waves of destructive, fiery energy, and the toppling of the tower itself. The accounts generally come from soldiers who were at the edges of the battlefield, for those in the thick of the fighting were incinerated within minutes, if not seconds. Pieces of the tower rained down across the landscape, burning and blasting the face of the island, and spreading fires across much of the rest. The major population centers were destroyed or otherwise emptied, with thousands fleeing toward other parts of the island, almost always in vain.

Those who could escape by water, the inhabitants of the ports and fishing villages, did so, cramming into their boats and making for the capital at Port Benacia, which retained a small safe zone around the harbor. There they gathered together, make repairs and taking on what supplies remained, before fleeing east to the county of Amarr. The desperate survivors, hoping to settle in a safer place, found themselves repeatedly driven off by the equally desperate natives, who by this time had begun to indulge in their national sport of Angry Mobbing. In early 2549, the hungry Pennà sailed to the county's capital at Fatehpur Sikri to beg for assistance, but following a disagreement with the Count, proceeded to sack the beautiful city and take its bounty for themselves.

Though driven by desperation, the actions of the Pennà refugees branded them as outlaws, and the cities of the mainland coasts would not take them in. The exiles, increasingly basing themselves out of the innumerable islets and coves of the Khaz Modan archipelago, began to have children, and to accustom themselves to lives spent mostly aboard ship, scratching a living through fishing, mainland raids, and finally, outright piracy. The 2550s and subsequent decades saw the coast of Brookshire become a dangerous place for shipping.

The continuing hard times, however, brought down maritime trade ever further, tempting the pirates to ever larger and wealthier targets, and drawing the attention of the Imperial Navy, slightly recovered under Kaiseress Carol I. The majority of the pirate flotilla, flush with recent successes, elected to launch an attack on Brookshire Hamlet in 2576; but the Ducal authorities and the Navy, having predicted the move, set a trap for the invaders, utterly destroying the main strength of the Pennà. Those who had refrained from participating in the failed raid, realizing that the wrath of the Imperial Republic would soon be upon them, evacuated the Khaz Modan Isles, fleeing for the mouth of the Elwynn before finally anchoring there and surrendering to their pursuers. The surrender document, known as the Pact of Abjuration, permitted the reabsorption of the Pennà into Shirerithian dominion, and served as the foundation for their way of life thereafter. The Pennà turned to trading and information gathering for their livelihoods, and as the gloomy years of the late third millennium continued onwards, they carved a niche for themselves in helping to combat the breakdown of communications and transportation that afflicted the country.

With the ascension of Mors V in 3004 and the dawn of the Fourth Era at hand, the revival of Shireroth finally began. The economy and infrastructure of the nation were redeveloped, and with them was a greater role in maritime trade, not only along the coasts but also across the ocean, between the core of the Imperial Republic and the Duchy of Kildare. The new wealth of the Pennà allowed them to upgrade their ships, and the concurrent rise to prominence of the sancts of the Duchy of Straylight provided them with mid-ocean supply stops and markets for goods. By about 3040 the relationship had grown close enough for the self-governing flotilla to place itself under the aegis of Straylight, an arrangement that meshed well with the independent spirits of the individual sancts, and which continued to prove profitable even during the chaotic succession struggles of the next 200 years. Since the return to stability in the mid-3200s, the loose coalition of the Pennà, now called Sunderspray, has continued to prosper.