The County of Smjörkýr (formerly known as Íseirdia-la-Vraulalennir) was one of the counties of the Barony of Iserdia within Elwynn.

Smjörkýr was a landlocked county in the north of Shireroth. It is one of the larger counties on Benacia by area. It is bordered by the counties of Illumination to the east, Eliria and Utasia to the southeast, Araxion to the south, Cape Farewell to the north. It shares a national border with Amokolia to the west. It has no major rivers and relies on Araxion and Cape Farewell for river and sea trade, respectively. 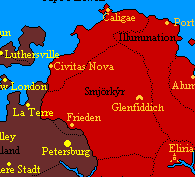 Smjörkýr, meaning butter cow, was founded during the Froyalan period of Elwynn during the Ducal Reign of Harald of Ettlingar Freyu and thus has a distinctly Nordic name. The county was established by ducal decree on 3050 ASC and replaced the previous county of Íseirdia-la-Vraulalennir. Nathan was appointed count on the same date as its creation. The county continued until 3300 ASC when the county was disestablished by Ardashir as duke of Elwynn. Then, in 3386 the county was reformed as Frieden, after the Natopian city of Frieden Mine, by duke Iskander Mirkdale. Finally, in 3426, the county was restored as Smjörkýr per Nathan's return to Shireroth and petition to have it renamed.

The county contained a large amount of ethnic Natopians who followed Nathan to Shireroth after the collapse of Natopia. Most of these Natopians stayed in Smjörkýr even after Natopia was restored and Nathan left Shireroth to oversee the reformation of Natopia. These people began to call themselves Smortopians after several generations of intermarriage with the locals. The county is part of the least densely populated area in Benacian Shireroth. Those living on the western side of the county had to until recently, cross the border into Petersburg, Amokolia should they have needed the services of a city. However, the recent establishment of the city of Frieden on the western border has begun the urbanization of that side of the county.

The county contained the highest concentration of Dozan Bovics outside of Natopia. The Bosarchy of Glenfiddich is an administrative district of the Dozan Bovic Church and encompasses all of the city limits and minor outlying suburbs. Beyond Glenfiddich the concentration of Dozan Bovics is negligible. The bosarchos' seat is one of the Bovic faith's most beautiful temples; the Temple of the Butter Cow in Smjörkýr is based on an ancient Scandinavian temple in keeping with the culture of the native population.