From ShireWiki
(Redirected from Sermolot)
Jump to: navigation, search

The Baronial Empire of Sermolot, simply referred to as Barony of Sermolot, is a subdivision of the Duchy of Kildare. It consists of New Jasonia, Demesos and Audentior. It's one of the smaller baronies of Shireroth. The name of the barony is derived from the dissolved Marquessate of Sermolot, more to the west of the barony. 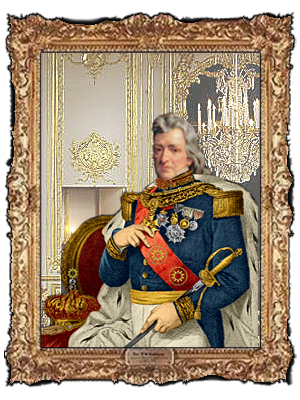 Sermolot was formed as an empire within the Imperial Republic. So people expected to find an emperor on the throne. This was, however, not the case in Sermolot. To avoid confusion, the emperor (or baron) is referred to as 'Senechal'. The Senechal has absolutist powers over his lands and can write decrees and appoint or fire his lower nobles (the counts). Instead of only getting a coronation, like the Dutches of Kildare, the Senechal also gets anointed with holy oil in the coronation ceremony.

The first Senechal will be Jon'Kur Win'Eth, played by Jonas. Until the coronation, Jonas is just Baron of Sermolot. 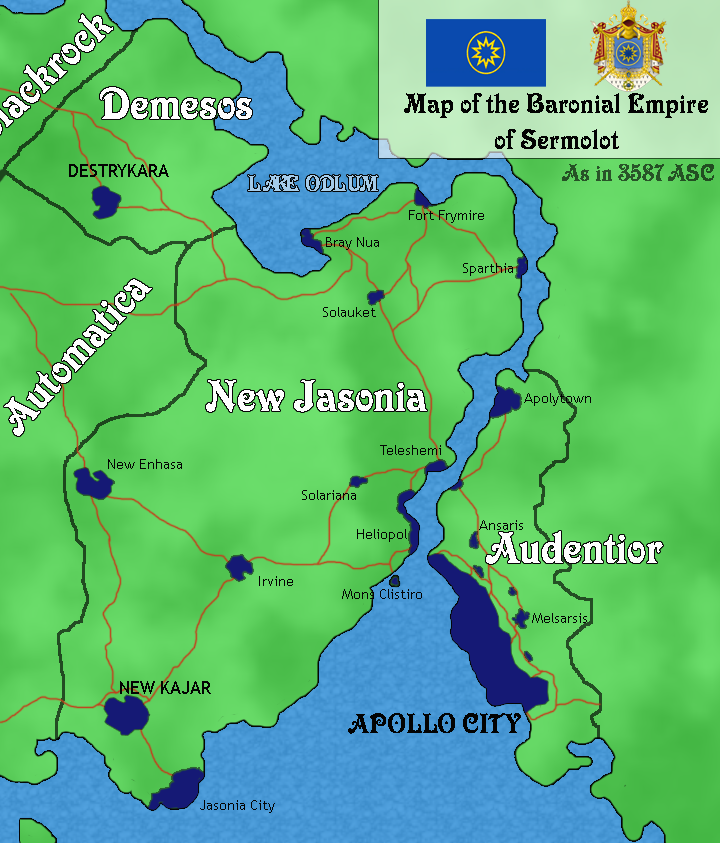 The Baronial Empire has the honour to own many important Kildarian cities. Apollo City for example has a great moral and cultural value (as it is often referred to as one of the oldest cities of Micras). And Mons Clistiro is the coronation city of the Dukes of Kildare. While the concentration of citizens stayed quite limited in the western parts of the Baronial Empire, the eastern county got a high immigration. Most immigrants moved to the current capital, Apollo City. What eventually resulted in a high population living on little space (what explains why the city is one of the only Kildarian cities with a skyline).

The most frequently used Sermolotian symbol is the sun symbol. It is widely seen at architecture and paintings made by Sermolotians. The sun symbol stands for the connection with the Soloralist believe. The same time it has a bit the form of a big BOOM, this symbolises the idea that Soloralism and other (major) Shirerithian religions can live next to each other without major problems.

Sermolotians believe that religion, and most likely Soloralism, is an important part of their life on Micras. Soloralism has enjoyed most privileges as being the major religion of the regions and by having the Senechal himself as Templar of the local Soloralist Church. While most religions like Cedrism get forgotten, there is one foreign (Cedrist) God that's particularly praised by even the Soloralists: Sakat, the God of History and Time.

There are many temples scattered over the Barony.

The Baronial anthem is referred to as the Hymn to Homeland. It's inspirated and almost wholly based on a hymn that was made for Audentior, by Scott Siskind. The melody is the same as the Greec anthem, Hymn of Freedom.

"Our Sermolot, Our Nation,
Our Cause, and Our Pride!

For the cause, that was forsaken,
Hath been given, a new life!

Oh Our Homeland!
Dear Sermolot!
Thus to you,
We owe our Freedom!

Oh Our Homeland!
Dear Sermolot!
Thus to you,
We owe our Lives!"

Sermolot controls the mouth of the Antya River. This gives the barony the perfect location to trade between the other Shirerithian traders who don't want to travel inland.