Palace of One Thousand Columns 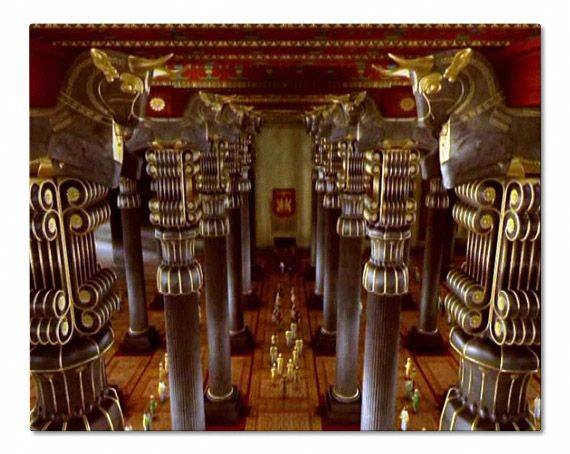 The Palace of One Thousand Columns.

The Palace of One Thousand Columns is the seat of the Emir of Alalehzamin and Utasia, the Royal Governor of the Royal Precinct of the Elwynnese Union of the same name. It is situated in the Royal City of Ardashirshahr on the banks on the banks of the Blue Elwynn. It is most famous for being the site where the Khan of Viyajanagara assassinated Kaiser Hasan I.

Following the wedding of King Noah of Elwynn and Grand Duchess Noor of Goldshire, the Palace of One Thousand Columns became one of the official Residences of the Royal Family.

Following the Auspicious Occasion of 1651 control of the site reverted back to the Arandur (Governor) of Alalehzamin and Utasia.

In 1645 AN the palace discretely hosted a joint Sxiro-Natopian military conference on the question of the Hammish Civil War[1]. Attendees included the Steward Daniyal Dravot, Liv Djupvik, Isabella Simrani-Kalirion and the ESB Group's Board of Directors.

Under the guise of attending the state funeral of Kaiser Dominus the participants had come together to discuss the strategic situation in Hamland from the perspective of the two allied nations and of the ESB Group. They were joined by a number of staff officers and strategic analysts in the Palace of One Thousand Columns.

The Natopian Defence Force had been tasked with cooperating with its Shirerithian counterpart, the Ministry of Military Affairs, to provide safe and unfettered transit for Shirerithian merchant vessels passing though the international waterways of the Sea of Storms by any means necessary within the limitations of international maritime law.. At the same time, the St Andre Trading Company had received a request from the Natopian Empress to organise shipments of humanitarian aid to a "a friendly and free Hammish port".

The allied commanders discussed the conduct of General Augustus Eliphas and the threat posed by a victorious National Salvation Front backed by the Realm of Passio-Corum. It was agreed by the parties to these secret talks that the mandates received by the various entities under their command would be interpreted in a manner conducive to bringing the NPA, the HRA and the Ravaillac Loyalists back to the negotiating table whilst degrading the operational strength of the HSF, as well as its sponsors if necessary.