The Ethnographic Hierarchy was an institutionalised form of political and social discrimination where residents of the Babkhan Majority County of Lesser Zjandaria (now a part of the Emirate of Alalehzamin and Utasia) were subject to a caste system. Although officially outlawed its legacy has had a lasting impact on intercommunal relations in Babkhi majority areas of Elwynn, including the Northern Ribat al-Eluinshahr.

The Ethnographic Hierarchy was enforced by the Office of Categorisation that lated gave rise to the dreaded Department of the Panopticon during the period of the Coordinated State of Elwynn. 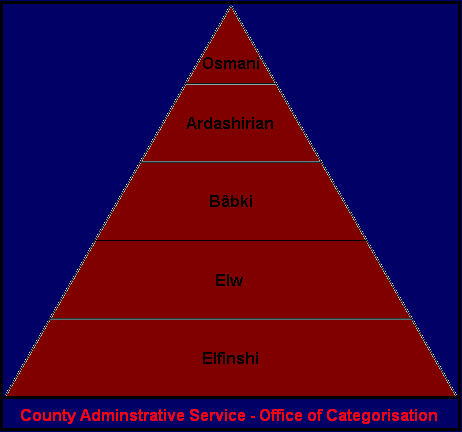 Osmani: The first Baron Ardashir was of the Babkhan imperial house of Osman and thus all direct descendents of the Khan are known by the patronym Osmani. They are at the very apex of the hierarchy in Lesser Zjandaria and control most of the great estates and government posts. Except for their power and social standing they are in all other regards indistinguishable from the rest of the Ardashirian population.

Ardashirians: Descendents of the first great Babkhan migration from Eura to Elwynn. Their arrival under the leadership of the Baron Ardashir Khan heralded the commencement of the times of strife, a series of wars and ethnic conflicts that saw the fortunes of that community alternate in dramatic fashion between ascendancy and oppression. The Ardashirians remain to this day most notably associated with the overthrow of the Elfinshi state they inherited and for the burning of the vast forests of Elwynn which reduced many parts of Elwynn to a wilderness of frozen deserts.

The Ardashirian community was nonetheless humbled by the uncertain fortunes of war and practically devestated by the periodic plagues which swept through Elwynn during the dog days of the Imperial Republic. In order to survive the Ardashirians resorted to taking wives from the indiginous Elw population. Controversies arising from the 'dillution of the blood' have largely been resolved by the rise of cultural nationalism which in large measure, out of necessity, supplanted the notions of ethnic and biological supremacy which once clouded the reason of the community. That said many inheritance disputes, it is unfortunate to say, are still resolved by resorting to a skin colour chart and DNA testing to determine the percentage of Ardashirian vs Elw genetic heritage in respective claimants biological make up. It has become in itself a disreputable field of medicine and law that is only gradually fading from relevance. The Ardashirian and Elw communities would by now have drawn ever closer had it not been for the influx of Bâbki migrants in recent times which have had the unfortunate effect of reigniting old prejudices and reinforcing the old cultural and race divides.

The Ardashirian attitude towards the Bâbki is complicated on the one hand they regard the Bâbki as a means to reconnect with the homeland and 're-Babkhanise' their bloodlines, but on the other they disdain the Bâbki as being base, vulgar and inferior - particularly as they are lacking in geneologies comparable to that of the Ardashirian great families. This being a consequence of the great disorders of the dark age that beset Eura in the wake of the Grand Commonwealth coming into existance.

Although there is a certain antipathy between Old Babkhans and New it is other stating it a little to say that the mutual hostitlity is anything like that as was once experience between the Ardashirians and the Elfinshi. Bâbki: Recent arrivals from the "Third Empire" on Babkhan Eura. Adherents of Zurvanism and radicalised by the protracted liberation struggle on Eura they are on the whole less tolerant of the multi-cultural society in Elwynn than the Ardashirians, and lessgrated, there being little or no inter-marriage between the Bâbki and the indiginous Elw, as well as a general failure or refusal to learn the common or standard tongue - which in their eyes still carries the connotations of being a Mondesian or slave language. The Bâbki resent their subordinate place in the racial and social hierachy considering themselves more pure than the Ardashirians who after so many centuries in Elwynn had, in their eyes, turned native. Some analyists fear that in the long term there is a danger that a civil war might errupt in Lesser Zjandaria if the ultra-orthodox Bâbki try to usurp the place of the established Ardashirian families which are considered to be more liberal and pluralistic in outlook, relatively speaking.

Bâbki migration to Elwynn gathered rapid pace after the fall of the Grand Commonwealth and the restoration of the Mango-Camel Pact led to the requirement for Babkhans to obtain a "certificate of non-evilness" falling into abayance. Calls for visa restrictions have not as yet become widespread although it has been noted with interest that members of prominent Ardashirian families have become associated with this minority position.

Elws: The Elws are the indiginous inhabitants of Elwynn, predating the Imperial Republic itself. Formerly a fierce and noble warrior race they had over the centuries become a servile people tied to the lands - although their lot improved remarkably as a result of reforms brought in during the Andelarion period. Although to this day resentful of the Babkhan dominance in Lesser Zjandaria they are animated by an almost instinctive patriotic loyalty to Elwynn, rejecting all other names for the land, and this has ensured that they have the beginnings of a common ground with the Ardashirian population as well as the ruling Osmanid families - even if they continue to find the 'Bâbkis' insufferable.

Elfinshi: Descendants of Menelmacari immigrants. Whether they sub-species of homoens or a seperate species altogether remains undetermined. Genetic compatability has however been verified with potential for fertile off-spring arising from that. Regardless of that potential interspecies matings are not known to have occurred since the Times of Strife. No known resident population in Lesser Zjandaria - although their suspected transit of the County boundaries does merit their inclusion in any hierarchy - a small isolated population suspected to have survived in the Phoenix Forest, in the neighbouring County of Illumination. Elfinshi blood vengeance cults operating out of the Yardistani Holy Lands are known to be active in covert operations to discover the remaining isolated pockets surviving in Elwynn as well as being implicated in repeated attempts to kill off the descendents of the Osmanid tribe in Elwynn.