From ShireWiki
(Redirected from Cimmerian Conflict)
Jump to: navigation, search

The Icebear Rebellion was an uprising in Northern Elwynn with the goal of establishing a theocracy under the guidance of the Holy Church of the Divine Icebear. The rebellion was supported by former Steward Jack Lewis, a Senator and Keeper of the Bailiwick of Fieldburg. 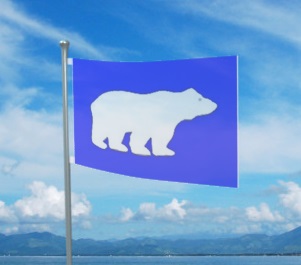 flag of the rebels

The Holy Church of the Divine Icebear had gained significant influence in Northern Elwynn in the aftermath of the Cabbage crisis. Fueled by their millitary successes in that war, Icebearian militias felt that they were entitled to more self-representation. The Coordinated State of Elwynn, ruled in practice by UDF generals, refused to give any autonomy to the Northern provinces, but governed on the basis of strict centralisation. No longer willing to take the status quo for granted, High Priest Jaqen X'halar issued a declaration in which he proclaimed Elwynn a theocracy. A large number of Icebearian troops moved to Fieldburg, which was governed by Jack Lewis. By doing so, they consolidated a large part of Northern Elwynn and Wintergleam.

Reaction to the Rebellion

The Coordinated State of Elwynn reacted immediately, issuing a declaration to suppress the rebellion. This declaration called for the immediate arrest of all members of the Holy Church, and would ban what it described as the "Icebear Cult" from Elwynn. Jack Lewis was ordered remanded into custody at His Serenity's Gaol Dragonsfold and stripped of his dignity and status as citizen, as well as the forfeiture of his human rights - which put him in danger of his life as his head was sought by al-Osman as a diplomatic gift to be given to Jingdao. The declaration was met with mixed reactions, but after seeing the advances made by the rebel forces, the Minister of Military Affairs threw his support behind the Coordinated State forces. A few days later, the Duke of Goldshire, fearing that the rebellion would spread across state lines, sent troops to Wintergleam. 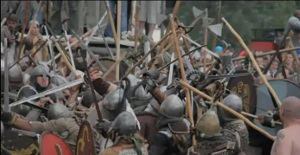 From Fieldburg, where local militias joined the Icebearian army, the rebels moved to the capital city of Eliria, which they besieged. The siege of Eliria would prove to be a turning point in the revolution. It quickly became clear that the rebels had taken too great a risk, and that it would be impossible for them to take the city. After burning some of Eliria's suburbs, the Icebearian troops withdrew. By then, however, the UDF had organised a large defensive army, which took over the rebels as they were on their way back. After a brief battle, the Icebearians were forced to surrender and their leaders were captured. The rebellion was crushed.

Immediately following the rebels defeat, Jack Lewis crossed the ocean and was granted assylum in Kildare. Seeing that his political career was over and that the uprising had failed, he chartered a plane which he subsequently crashed into the Cedrist Temple in Shirekeep, destroying it. Lewis died in this attack and is revered as a martyr in the Icebearian Church until this day.

The Coordinated State intended to strike back hard against the Northern Bailiwicks that had supported the rebellion and the military response swiftly came together on the 7th of Oskaltequ 1609 in the form of Operation Furious Badger, a three-pronged counter-attack against the Cimmerians as well as against the rebellious Bailiwicks of Tundrok and Fieldburg.

The 10th Territorial Defence Division, known as the "Balarakian Guards", comprised of 23,633 soldiers across two Jaeger battalions, one armoured ('Hovershock') battalion and an air-mobile assault group, was ordered to invade Cimmeria, supported by the 12th Naval Division and a significant force of Goldshire Regulars. However, due to the internal problems within the state government, they never managed to effectively eradicate the Holy Church. The UDF experienced severe difficulties in re-establishing control on the Cimmerian Islands. Where troops landed they not only faced adherents of the icebear but also the followers of the rogue Governor of Thunderrock, Grod Malakanon.

According to Operation Furious Badger the plan for the UDF and the allied Goldshire Regulars was to interdict the rebel forces by means of a blockade of the islands, which was to isolate them from each other and from the Benacian mainland and then to scour the island in search and destroy missions for suspected dissidents. This phase of the operation was known as Op Tanglefoot and was the preliminary step in a wider campaign to destroy the Holy Church of the Ice Bear and Grod Malakanon. The battlegroup also received reinforcements during the conflict from the Maritime Reconnaissance Division and the Corps of Gentlemen-at-Cudgels.

In spite of the efforts of the significant battlegroup deployed to the theatre, the various factions were able to maintain inter-island communications, with a regular traffic of armed hovercraft and personnel shuttles linking the self-declared Tundrok garrisons whilst the motorised skiffs and war canoes of the Icebear clans posed a persistent menace to the tramp-steamers and fishing vessels operating outside of the government declared maritime exclusion zone.

The 12th Naval Division had, after considerable investment by the Coordinated State after 1607, developed into a strong littoral defence force comprised of thirty Ekranoplans, five Type 6 Kalirion Class Armoured Missile Cruisers, four Type 7 Ayreon Class Nuclear Submarine Scouts and two survey ships. In spite of this unanswerable naval supremacy the Naval Division was increasingly called away from the fight against the Cimmerian rebels to deal with drone swarms and electromagnetic pulse weapons of Tundrok. After the evisceration of the 4th Tactical Aviation Division in the battle of Thunderock the Naval Division's experimental pair of Gravitational Inversion Rigs were called away from the island clearing campaign just as the forces sent to clear the Bailiwick of Fieldberg lost their tactical aviation cover, provided by the Emergency Fighter Programme for the same reason. 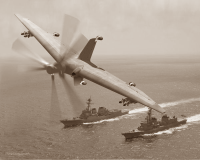 These diversions left the expedition to Cimmeria dependent upon the commandeered merchant vessels of the Elwmarine operating out of Vijayanagara and upon the submarines and corvettes of the Goldshire Expeditionary Force which were not infrequently crewed by personnel of a buccaneering inclination that bordered upon the lunatic.

The town of Ursulabýr on the island of Snowhawk was home to the one of the last loyalist garrisons on the islands. The exact details of its destruction and fall are not satisfactorily known but the Daily Mail & Telegraph of Eliria reported on the 7th of Silnuai 1610 that the the itinerant Babki tramp-steamer 'Kapavshahr' and the Goldshire submarine 'Alnientor' independently verified the burning of the town by parties unknown. A column of fire was reported to have loomed in the sky over former location of Ursulabýr's harbour. Discredited rumours claimed that on the day of the destruction creatures, both living and dead, of a type previously unknown to nature were swimming in the coastal waters of Cimmeria in great numbers. The nature of the weapon used against Ursulabýr is unknown and a scientific expedition sent to the island by the communist government in 1615 investigated the charred remains of the town and could detect no more than the usual background radiation (which were slightly elevated in this region owing to atomic tests and other experiments undertaken by the Imperial and State governments in the past). Interestingly no human or animal remains were ever recovered. More credulous Cimmerians claim that it was the one known example of the wrath of the Ice Bear being manifested during the course of the war.

UDF control of Wolfraven was bitterly contested with the garrison there being reduced to a state of siege that would last until the Communist Revolution. The besieged main city was under the command of Senator Rexus Ursalion, who was appointed to the Guild of Alderman as Keeper of Wolfraven by Steward Tokaray al-Osman. His isolated force comprised of the 100/00/01e Stafkompani under Majoor ed-Dauleh, supported by a company of 100/03e Jagarbataljon. Aqa Ursalion had been promised the governorship of all Cimmeria after the war, unfortunately since the war did not end until after the Coordinated State had fallen his reward for enduring two years of siege was summary revolutionary 'justice' and a firing squad.