Choconya is a region along the southern coast of Apollonia, originally an independent nation in the very early days of the Apollo Sector, although more closely tied to the Cyber-Islands and Cyberia. It eventually passed into the hands of the United Imperium of Cyberia and Emperor Jacobus, and later was gifted to Audentior. As an Audente subject Choconya became tied to Kildare and with their secession became part of Jingdao. It is presently a command (province) of the Raynor Isles and Norfolk.

As the name might suggest, Choconya (or Choconia in Latin countries) is derived from the word chocolate, and essentially means "the land of chocolate".

"Eating chocolate every single day, who does not want to live there? That's what Lisa Elliott and Tammie Lee thought too. During a boring lesson in geography they founded Choconya, a religious movement about chocolate.

Lisa became the "Chocolate Goddess" and the official holiday was declared to be Easter, of course because you can eat a lot lot lot chocolate.

Because the religious character the movement didn't attract new members, Lisa got rid of her goddess-status, and let herself be crowned queen on 25 September 1997.

Choconya survived several incidents, among them a few separations and a civil war, before fading into obscurity as a holding of Cyberia.

It seems that Choconya took sides in the events following the First War of Cyberian Liberation. From the Mattimeo Messenger of September 14, 1998, --

In their continuing attempts to blackmail Cyberia into recognizing the false claims of East Cyberia to the Provinces of Mala and Windsor, the Kingdoms of Choconya and Falkenberg last week imposed an embargo on Cyberian goods. This is in addition to diplomatic sanctions previously imposed by the two monarchies against Cyberia. The embargo is largely symbolic due to the fact that little or no trade previously existed between either despotism and Cyberia.

In response to the latest moves by Choconya and Falkenberg, Dep. Peter Hickey (PFP-At Large) introduced a resolution in the Chamber of Deputies last week calling upon the President to bring a formal grievance in the Grand Alliance Council against Choconya, seeking relief and restitution against Choconya for "aggression and attempting to interfere with the internal affairs of Choconya." Both Cyberia and Choconya are members of the Grand Alliance. The Chamber will vote on Hickey's resolution in its next meeting.

The Kingdom of the Chocônia (in English, Choconya) is a anglophone modelist micronation. Chocônia (spelling later changed to"... nya") was established by Australians & New Zealanders to be the land of chocolate. It merged with Reunion but then seceeded and united with Pingüínia (Penguinea). After another unsuccessful union, Choconya decided you live separately to under Queen Lisa I.

Denis: "I searched the net to find some pictures of Choconya but I found out that Choconya is no longer. I got that information from Claudio de Castro."

"Choconya used to be a province of the "micronational superpower", the Holy Empire of Réunion (Imperial Territory of Greater Choconia), from which it secceeded in Feb, 1998 (they claimed their chocolate-lovers religion was not accepted by the christian empire). Founded by Lisa Elliot and Rick Harwood, two Australians (with the union of their two nations, Soveraat and Great Choconia), after the seccession from the Holy Empire (http://www.reuniao.org ) they became a Monarchy (KINGDOM OF CHOCONIA), on which Queen Lisa I ruled.

After a while, the nation became "the New Commonwealth of Choconia" with Mr. Harwood as Chancellor.

Later on (around July, 1999), it finally, and unfortunately died. Elliot and Harwood are now citizens of Penguinea, another micronation."

The illustrious Cody Williams attempted to revive the nation later, with little success. For a time Cocoanut Grove was considered as the capital city. It was annexed by Emperor Jacobus to the United Imperium as a condominium (with Audentior), and later as a protectorate.

The intent was to make a Free City and intermicronational meeting site, but this did not come to pass.

After many years as a forgotten backwater, the rise of Norfolk as a strong state rekindled interest in Choconya. The destruction of Tymaria City as the region's largest metropolis also sent many refugees fleeing into surrounding territories, including Choconya. This growth in population and interest have led to a revival of its stagnant economy, and a sharp increase in chocolate production.

As might be surmised by its name, Choconya's primary economic base is in producing chocolate. The equatorial climate makes it an ideal location for growing cacao (Themobroma cacao), and indeed this was the first basis for development around Cacao Grove. Refined chocolate became a more recent development, originating around the city of Chocolate Springs. The city has become an important exporter of fine chocolates worldwide. Tourism has also become an important source of revenue, and many cafes serving various forms of chocolate have sprung up in the major cities, especially Chocolate Springs.

Chocolate Guards are a unique combination of warrior and chef. As the very early Choconyans were connoisseurs of chocolate, and therefore artists in its cooking and preparation, being a chef was considered a great honor. Even today Choconya is renowned for its culinary institutions. So dedicated to cooking were the first Choconyans that they had no trained army. Thus in its first conflicts Choconya recruited many chefs to the military. As such it became tradition for elite soldiers to be dual trained as master chefs and commandos. These soldiers could wield a knife equally on a battlefield or in the kitchen. While this special training was reserved mostly for elite soldiers, as Choconya's defense became the responsibility of Norfolk, the Chocolate Guard was retained as the most representative (and capable) force for defending the territory.

This tradition remains firmly in place today, and all members of the Chocolate Guard are trained both at the Culinary Institute of Cacao Grove and at the Norfolk Military Academy. Wearing their traditional chefs outfit into battle can often confuse an enemy, who assumes them to be the auxiliary support for the troops, only to be surprised by their combat skills - albeit often too late. 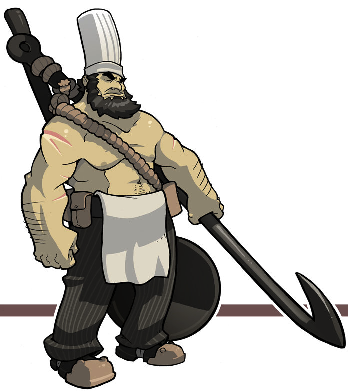 A warrior chef of the Chocolate Guard

Choconya is located in southern Apollonia, east of Audentior and along the coast. It is considered a part of the Raynor Isles, even though it is on the mainland of the continent. Being situated close to the equator gives the area a tropical climate, which has proven quite suitable for the many chocolate plantations that now bisect the region.