The Holy Empire of Jingdao at Sea (Dutch: Heilig Keizerrijk Jingdao ter Zee) is an island kingdom in the Antican Sea which encompasses six isles. It originally received the name Kingdom of the Six Islands, until Jezza ascended upon the Throne and declared Himself successor of the Heavenly Throne.

The nation is seen as the spiritual successor of the Jingdaoese Empire (which lied in Cibola), after that was destroyed by the Heavenly Light, Sisera Bat Erasmus. Until this day, this action is still referred to as an example to all Jingdaoese that they are the Purest of all Mankind, as they voluntarily welcomed dead in an attempt to stop the corruption of society by false gods. The Jingdaoese diaspora that happened after this Day of Destruction ended with the conquest of the six islands by king Rollin who himself was a Jingdaoese.

The Jingdaoese, who make up the elite, have even become more protective than they were before: while in the ancient empire non-Jingdaoese could grow in power and influence, this has almost become impossible if you're not from Jingdaoese blood in the Islands.

Jingdao has, and had, several different names. Before the Diaspora and end of it, the Jingdaoese referred to their country with several names: most common was the Empire of Jingdao, which means Empire of the Pure Path. The name South Batavia has also been long in use, but was merely a reminder of the past, in which it was a colony of the Kingdom of Batavia.

The people who lived in the country were often called Jingdaoese or South Batavians. No real distinction was made between the use of this demonym. This would change, through time, when it became clear that those who were Pure and followed the Ways of the Gods tried to distinct themselves from the several races that were part of the Empire.

After the diaspora the 'Pure People' kept the name Jingdaose, but while the newly revived Empire is called Jingdao nobody who doesn't belong to the Pure Survivors can call him/her a Jingdaoese. This has made it very confusing for foreigners. When referring to all the people of the Holy Empire, people have to use the demonym Islanders.

There is no real year to start the South Batavian Era with, as the early history of Jingdao is linked with the colonisation of the Cibolan continent by the Kingdom of Batavia. The earliest attempts to settle a decent colony, the Grand Duchy of Aragon, found place in 2788 ASC. 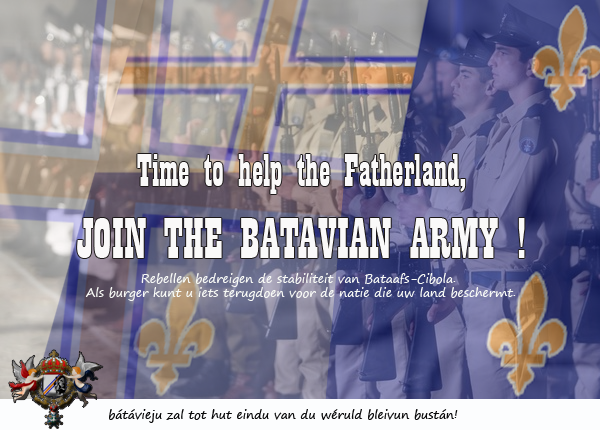 Propaganda for the Batavian army: only the coast line was in hands of Batavian Armed Forces, so any help from local population was needed.

The large amount of small settlements and colonies would eventually, under pressure of the early colonists, be united under a loose union called Batavian Cibola. From that moment, more and more colonists went land inwards. This is also seen as the moment in which Batavian colonists and locals start to work together. Certain mixed communities start to grow, which will form the base for the Jingdaoese people (mostly the Nederburgians and the colonists).

The existence of the Batavian Cibolan colony is quickly challenged when in 3732 a civil war starts between the Nederburgian, Aragonese and Batavian forces.

In 4161 ASC the Batavian Cibolan colonies were reformed and placed under a more centralised administration to combat political ineffectiveness and corruption. The colonies also underwent a name change, becoming Great Aragon, and saw the introduction of former Aragonese symbols. The attempts to spread democratic ideals in this region became very unpopular when massive fraud was discovered in several local elections.

Through the ages, dissatisfaction with colonial rule would only grow slowly. It would take till chaos on the Homelands became clear and civil war broke out in the North, that the colonists and colonials took power in their own hands.

The real birth year of the South Batavian nation is 4521 ASC, the year in which Herman Civilis became Grand Duke of the southern colonies and formed the Grand Duchy of South Batavia.

The Empire of Jingdao exists out of six islands, each one of them being represented in the Bondsdag by three elected representatives and in the Rijksdag by their respective land nobility.

The most central island.

Idisland is a very prospering island: both the northern and southern city states of the island were, before the Jingdaoese arrival, in conflict with each other. But thanks to the central city states, of which Aquilar was the most powerful, armed conflict was prevented and the cities and its population could prosper thanks to the peace.

Today the cities of Idisland are still important in the trade and one of the more important tax payers for the Heavenly Treasury.

The smallest island of the original six and also the most dangerous. Jezza Rasmus, the later Duchang Emperor, is most likely the most famous of its citizens.

When someone seeks the darker side, you can get it here.

The largest island of them all is without doubt Baishensgraf. The island, which in Antican times held the name Nafticon (after which the Antican capital was called) and in early Jingdaoese times held the name Jador, became in 5212 ASC formally Baishensgraf (Baishens Grave). With this name the local population remembers the fallen Antican demon Sammy, who was revered throughout that country. Luckily, the arrival of the Jingdaoese brought Light to the island and this false god disappeared.

Home to the first Jingdaoese settlers and centre of political and cultural institutions, thanks to the Kerkelijke Academie van Pentapolis and numerous government organisations. It was in 5160 ASC that the first Jingdaoese arrived and built their capital under the rule of Rollin, which led to the city being called Rollins Piek. From that moment, the Jingdaoese would start conquering and integrating the surrounding islands.

While the Empire officially holds some minor trade cities on the mainland - which could better be called settlements - those are de facto governed by a company which received the state monopoly and freedom to set up colonial possessions. This organisation, the Shangye Company (SYC, Trade Company), is responsible for its own colonial forces, law and order in those regions.

The primary goal of those colonies is to trade with the locals and, most important in the eyes of the Heavenly Government, to serve as a base for the Fleet.

The Heavenly Light, also referred to as Emperor of Jingdao, is the head of state of the Empire. His political power doesn't know any boundaries and in his spiritual role he is only beneath the Magister of the Catologian Church.

Cabinet of the Emperor

In his actions, the Heavenly Light is helped by an Imperial Cabinet which is led by the Imperial Chancellor.

The Imperial Secretariat is the highest advisory council within the Empire. The council, which exists of forty by the Heavenly Light appointed members, advises the Emperor in almost every issue and could easily been seen as the most important and influential organisation of Jingdao when it comes to political power.