Norfolk is a is a collection of islands off the southern coast of Apollonia in the Raynor Sea. The islands are commonly referred to simply as Norfolk, but geographically are called the Norfolk Islands. Norfolk is one of the few locations to retain the same name throughout the entire history of Micras.

Founder Patrick Foley chose the name after Naval Station Norfolk, located in Norfolk, Virginia. The heavy emphasis on the American navy played an important part in forming the culture of Norfolk as a nation.

The Republic of Norfolk

Norfolk was originally founded by Patrick Foley around 2000 as one of the early sister states of Audentior and the Flying Islands of Jasonia, thus making it one of the early Apollo Sector micronations. Since Patrick was an avid fan of the United States Navy and eventually would choose that venue for his career, Norfolk was strictly modeled along naval lines. In its time it was known for having a large battleship with its guns firing for the background image of its forum (the USS New Jersey). Norfolk was involved in a number of wars and made use of its vast navy, typically being confined to a geographically small coastal area - land which it maintains to this day as a county of Shireroth. It was involved in the Infernal War between the People's Republic of Hell and the Flying Islands of Jasonia, whereupon at one point the Infernals seized the Norfolkian forum - which at the time was considered a virtual checkmate - and Blackrock interjected and took it back, but not before imposing some of their humor on it by changing the forums to pink girlish colors. After these events the Republic slowly went inactive until it was eventually annexed by Shireroth.

Flag of the Republic

The County of Norfolk

After the plague trade from the other counties dried up and many Norfolkians turned to piracy. The county government is more active again in resisting them, but the pirates remain a powerful force, led by Captain Rackham. Like many pirate gangs, Rackham's leadership was soon replaced by that of Captain Walter Poldark, who established a loose confederation of pirates known as the Maritime Free Republic.

Norfolk became part of Kildare when it voted to secede from Shireroth and join the Apollonian Republic. During this time Norfolk was absorbed into Aryasht and ruled from the mainland. While the Aryashti were in control they appointed one of their own, Zaila Vrteti, as ruler of the isles. Vrteti became an immediate program of Aryanization of Norfolk, adopting many Aryashti symbols, religion, government, and cultural practices. This alienated many of the native Norfolkian, who were shared a close kinship with the westernized civilizations that emerged from Audentior and Blackrock. But the Aryashti reign came to an abrupt end with the nuclear catastrophe that wiped out many major cities - including Tymaria City - and resulted in the collapse of the confederation. In its wake the native Norfolkian population rose up to retake their islands, and forced the Aryashti out, aligning themselves with Apollonia's successor, Jingdao.

The prominent Norfolkian Franklin Ross, whose long line descends back to the Republic, formed the National Republican Party of Norfolk and proceeded to rally the native Norfolkian to his side. This group then forced the relocation of all non-natives (especially the Aryashti) back to Eblis-Rulak, which was acting as successor to Aryasht. Ross then initiated a cultural renaissance that aimed to bring back much of the symbolism and nationalist pride of the Republican era. The new government has begun investing heavily in restoring Norfolk's primary industry as a naval defense manufacturer, forming strong ties with the Kingdom of Batavia.

Norfolk is ruled by the National Republican Party, a center-right conservative party that is allied with the imperial government of Jingdao, and as such maintains representation in the Seanad and Imperial Assembly. The local government follows a military hierarchy, with the leader assuming the role of Commander-in-Chief (CinC). The CinC's second-in-command is the Secretary of Defense, followed by a seven-member cabinet known as the Joint Chiefs of Staff. The Chiefs of Staff oversee daily governance of the seven Commands of Norfolk. 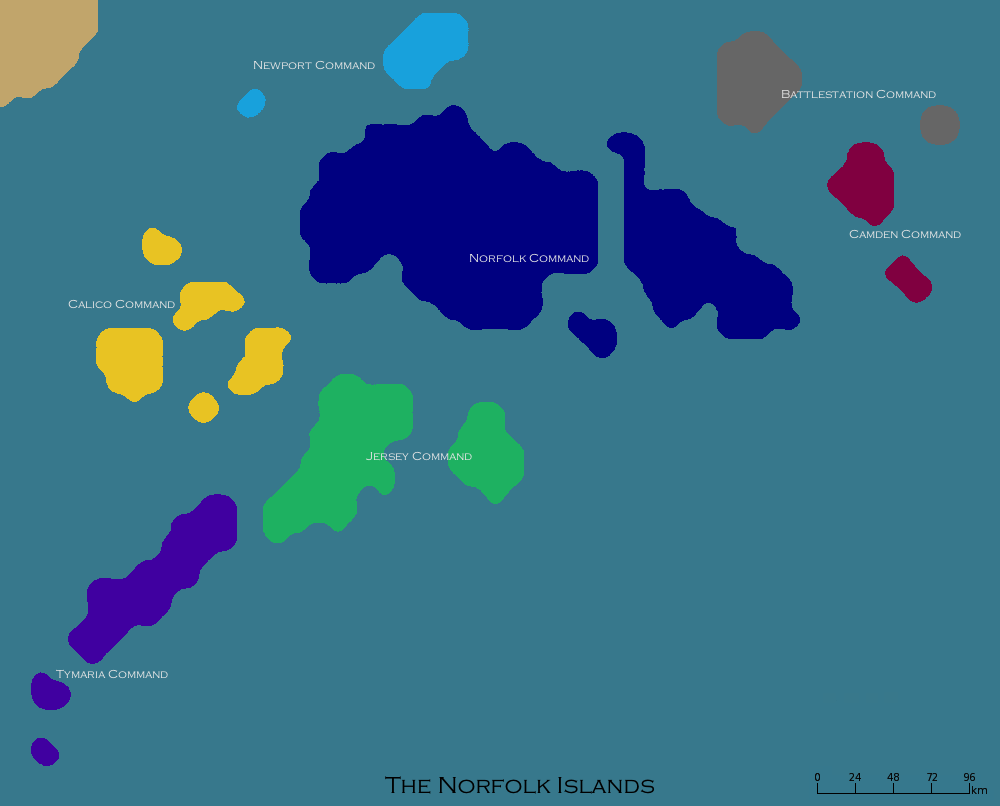 The seven Commands of Norfolk

Norfolk is an archipelago of twenty islands located off the southern coast of Apollonia in the Raynor Sea. 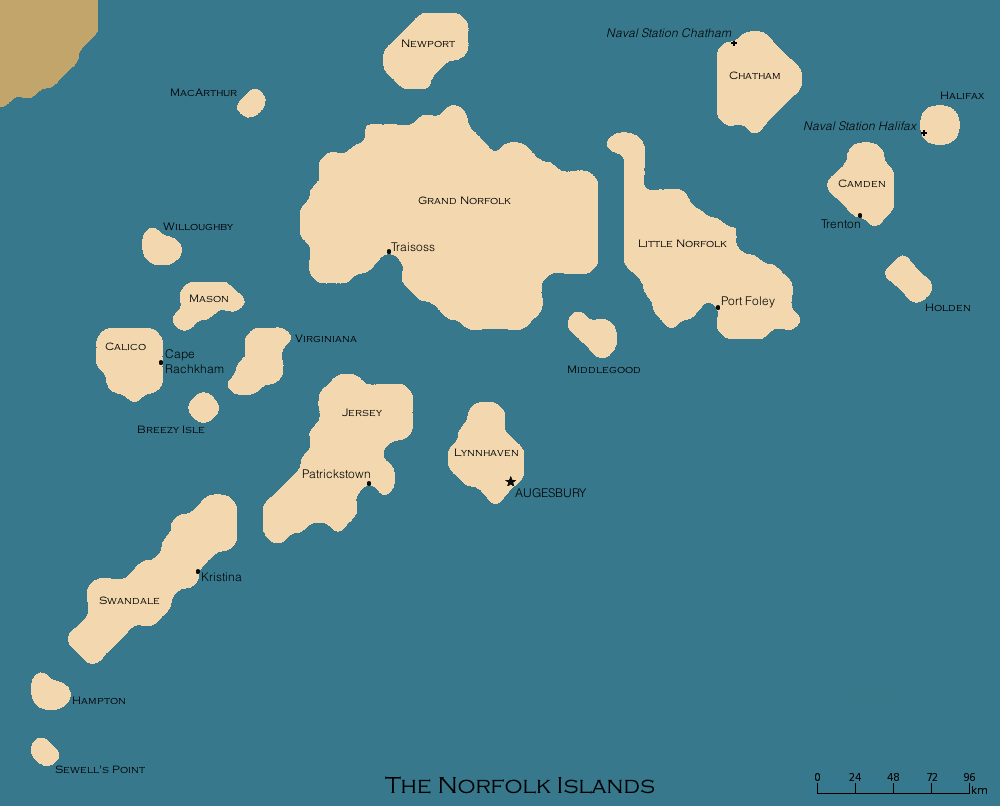 Map of the Norfolk Islands
Retrieved from "https://shireroth.org/wiki/index.php?title=Norfolk&oldid=16057"
Categories: