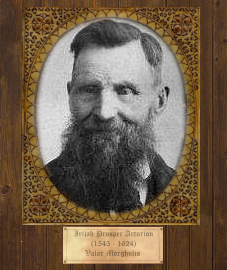 Born in Eliria to Galehaut and Lisanor Arturion on Amnure the 13th of Kuspor in the year 1545. His parents both perished during the White Lily Revolt and he was placed into an orphanage for four years until being adopted by the Khan of Vijayanagara and enrolled into his School for Foundlings along with four hundred and fifty-three boys and three hundred and ninety girls all between the ages of five and ten. The children, including Irijah, remained then with the School until they came of age at eighteen.

The brightest and best of these were sponsored by the House of Kalir to receive an advanced education in logic and the sciences on the forbidding ice bound isle of Raikoth. Irijah was in his fourth year of studies when Elwynn declared independence, leaving him stranded in suddenly hostile Shireroth and unable to return home. Instead he travelled to Kildare and explored the historic sites of Apollonian civilisation, until an unfortunate incident in an obscure tavern on the Raynor Isle saw him deported back to Vijayanagara, which by that time had been occupied by the forces of Shireroth and Kildare after the partition of Elwynn with the Separatists.

He subsequently worked in a variety of clerical administrative roles before he finally found service as a magister with the government of Duke Balarak Alaion at the age of 42 when the Lord of Dragonskeep was granted dominion over Eastern Elwynn.

Travels and Authorship of the History of Elwynn

With reunification, his employment at Dragonskeep came to an end. Able to return to 'Elwynn Proper' for the first time in 33 years he was possessed of an intense curiosity regarding the realm and a desire to explore every aspect of it.

He became infamous for his boast to Conducator Royston Merrick, of visiting each and every single one of the Bailiwicks of the Elwynnese Union:

"I have so travelled in your dominions both by the sea coasts and the middle parts, sparing neither labour nor costs, by the space of these four years past, that there is almost no cape, nor bay, haven, creak or pier, river or confluence of rivers, beaches, washes, lakes, meres, fenwaters, mountains, valleys, moors, heaths, forests, woods, cities, bailiwicks, castles, principle manor places, monasteries and colleges, but I have seen them; and noted in so doing a whole world of things that were to my mind very memorable."

It was in consideration of his very 'memorable mind' that the Conducator had Arturion made subject to a Preventative Detention Order in order to keep him free of distractions, or the impulse to wander, whilst he worked on what became his 'magnum opus', the History of Elwynn, from the comfort of a fully furnished apartment in a ruined tower of Eliria Castle.

He was released after the Communist Revolution of 1613, an occasion of restored liberty that distressed him greatly, and, after some discomforted wanderings found a junior position in the Library of the People's Academy of Elwynn (Alôqoqar Etâqon Adurellion) which permitted him to continue with his work comparatively free from interruption.

His life's work was mostly a continuation and elaboration of the Histories of Ric Lyon interwoven with anecdotes relating to the various towns.

In later life Irijah sadly fell prey to delusions of the mind, prominent among which was the notion that he was on the cusp of attaining immortality. This weakened his standing amongst his fellow scholars and led to a long-running dispute with the Vice-Chancellor of the Alôqoqar Etâqon Adurellion whereupon the Librarian attempted to prove once and for all the actuality of his apotheosis by calling for a bonfire to be built in the courtyard of the Eliria College of the Academy (now Kings' College).

Nonplussed, the Vice-Chancellor agreed to the request and at once ordered the students of the college to sally forth and seize anything that would burn from the rubble and spoil heaps around Eliria Castle (where reconstruction work was nearing completion). This they did with great enthusiasm, excessive enthusiasm in fact which resulted in a minor riot and the demolition of a row of terraced housing, the ransacking of four pubs, a hotel and a full on brawl with the Longships Guard.

Four days later, on Izillare the 8th Silnuai in the year 1624, before a vast audience of jeering detractors and curious onlookers, Irijsh Prosper Arturion walked out onto the Quadrangle. Dressed in robes of state befitting an academic of many years standing, he walked purposefully, and with his head held high in quiet and dignified silence towards a raised platform set before the mound if wrecked furniture and timbers which would form the bonfire. Stepping up to the platform he surveyed the scene before him in calm and quiet contemplation before doffing his cap to the Vice-Chancellor and his companion Isabella Simrani-Kalirion who watched from the balcony of the Chancellor's Palace. It was also reported, but never confirmed, that Prince Joel watched from a concealed rooftop vantage point peering down onto the courtyard.

A moment of silence followed before the Vice-Chancellor raised his hand and pointed to the pyre. At this point two proctors, dressed in black robes and each escorted by a pair of Longship Guards, each stepped forward carrying a burning torch which they plunged in unison into the kindling. The flames caught quickly and within half an hour the bonfire had become a roaring inferno. At this point Irijah dis-robed and, wearing nothing but an antique navy blue bathing costume and clutching a bound leather scroll case stepped towards the edge of the platform.

A hush fell over the crowd, this had been the moment for which they had been waiting. Bathed in the heat of the bonfire, Irijah stood at the edge of the precipice between vindication and shame as well as between the life everlasting and the most permanent of deaths. A moments hesitation ensured before at last Irijah cried out to Elith and Ainai (Truth and Beauty in the theology of Raikoth) to save his soul before he boldly stepped forward into the flames...

...and there perished horribly whilst shrieking in agony the whole time.

The Vice-Chancellor had suspected that this might be the most probable outcome and had asked the local Commandery of the Emergency Services to have some consœurs present to rapidly extinguish the flames and some Orchinots of the Red Orchid Society to attend to Irijah if he had, by some miracle survived.

Their services were however not required and if Irijah had been expecting to be bestowed with immortality in the literal sense then he was sorely disappointed, as anyone with third degree burns might expect.

However as one of Elwynn's more notable suicides, he was after a fashion conferred with an immortality of sorts, such as enjoyed by Jack Lewis, that will endure as long as the accounts of his last day are remembered and discussed.

After his demise the manuscript was unfortunately severely damaged as they were found blackened and charred from the burnt remains of Irijah's scroll case, which rolled free of the bonfire as his firm grip was weakened by spasms of agony. However the Vice-Dean of the Library and academicians of the Alôqoqar Etâqon Adurellion are attempting a reconstruction of the work based upon the accumulated mass of research notes and the charred remains of the original tome.