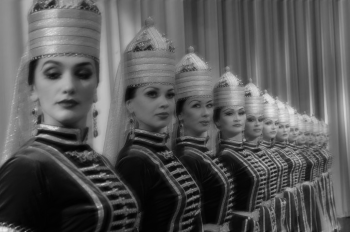 The Honour Guard: entrusted with studying the great and the good in intimate detail.

The so-called Honour Guard (Praeta:??) is a group of attractive and talented women who were recruited beginning in 1651 to seduce powerful men at Court and in the Imperial Government thereby extracting information which would then be passed on to Liv and used as political leverage by the latter.

Liv Dravot was keenly aware of the power and influence women were able to wield over men - knowledge she had acquired from observing her late husband, Lord Adam recklessly abandon his part in the coup against the Kaiser Dominus in order to rape and abduct her to serve as his "wife". Those circumstances bred in her a certain contempt for men, whom she considered to be greedy fools, readily led by their genitals.

She set out establishing this select group of twenty beautiful Imperial Officers, hand chosen by herself, as ladies-in-waiting whom she had dressed at all times in excessive and beguiling splendour. Since the Auspicious Occasion there had been a glut of silk and cloth of gold fabrics from which exiled Alexandrian couturiers fashioned exquisite costumes of a singular elegance.

They took active roles in Liv's fantastic spectacles and magnificent entertainments which were regularly put on for the benefit of the court. At one lavish outdoor banquet held in the Raynor Mausoleum, the male guests were served by ladies with bared breasts. The members of the "Honour Guard" were encouraged to form sexual liaisons with the most influential men at court on whom they would spy for the Imperial Mother.

After Liv departed for Eliria in 1654, the services of the Honour Guard was retained by Waldemar Zinkgraven who recognised their utility. Their focus however shifted away from the Imperial Court to the magisters of the Imperial Army, whom Zinkgraven variously suspected of incompetence or treachery for their failure to crush Jingdao.

It should be noted that catamites and tea dancers, preferred by the practitioners of the so-called noble vices, were run separately via the Chamber of the Crypteia which also traded upon and exploited human weakness in its efforts to root out corruption and disloyalty.

Listed as absent without leave and in defiance of the Golden Mango Throne in the aftermath of the War of the Casks.