Holy Realm of the Great North

The Holy Realm of the Faithful Tribes of the Great North is an Imperial State established from the wreckage of Elwynn's Northern League. It declared independence from Shireroth in 1660, following political and military turmoil in Elwynn. The Holy Realm controls the former Elwynnese provinces of Cimmeria with Illumination, Agnesia, Cape Farewell and Iserdia. In 1665 the realm was formally recognised by the Landsraad as an Imperial State known as the Holy Realm of the Great North.

Northern Elwynn has a history of violent rebellion. Ever since the Holy Church of the Divine Icebear became a major religion in these lands, opposition to the government in Eliria has risen. The Icebear Rebellion of the early 17th century had broken the hopes for independence for the Icebearians. However, years of Froyalanish occupation and weak local governance allowed the hardline faction within the church to expand and once again gain control over the harsh North. 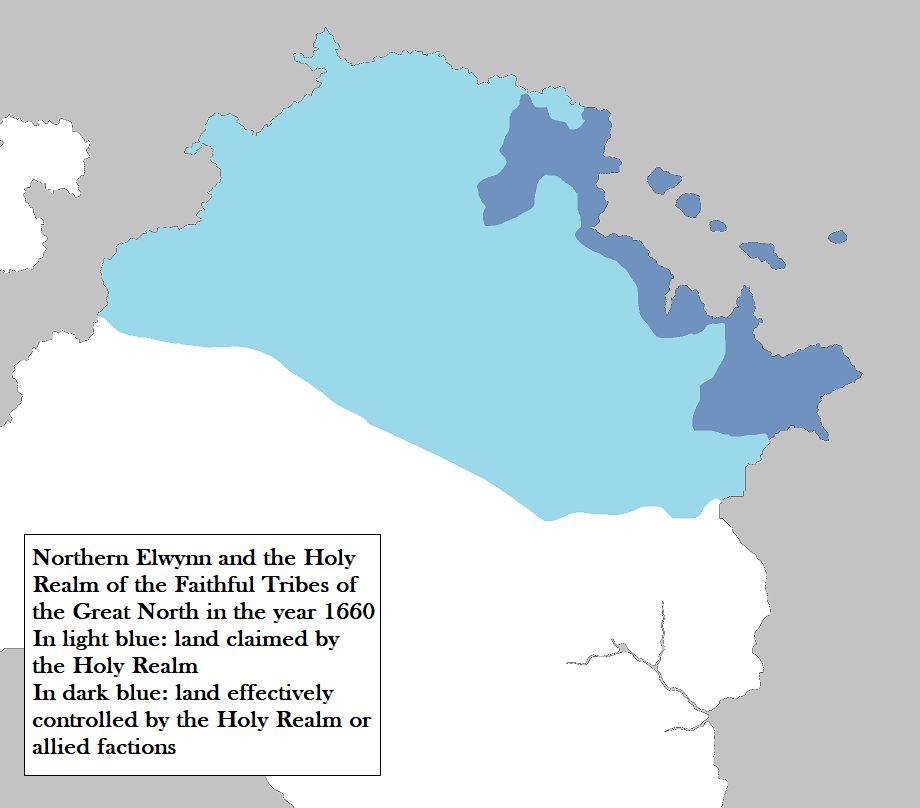 The conversion of Eki Verion, Countess of Illumination and Cimmeria to the Icebearian Church empowered the seperatist aspirations, and when civil war between National Humanist and Ayreonist forces in Southern Elwynn was on the verge of breaking out, the Icebearians took their chance once again, and proclaimed the second theocracy.

Follwing the Elwynnese Civil war, Eki Verion was named Princess of Elwynn. Subsequently, the Holy Realm was given official status within Elwynn. After the disolution of Elwynn, the North was admitted as an Imperial State, serving as a de facto successor state of Elwynn.

The only officially recognised religion is the Holy Church of the Divine Icebear, which is the largest religion on the Cimmerian Islands and a prominent religion in Northern Elwynn, and as such also in the area claimed by the Holy Realm. The Church is famed for its militaristic attitute and its intolerance towards other believers. It worships the Divine Icebear as the Supreme Being and Creator of Micras.

The Military is divided into two subdivisions: the Northern Army (largely comprised of former UDF soldiers), and the more radical Banners of the Faithful Tribes.

The Banners of the Faithful Tribes are the armed forces of the governing Eki Verion coalition, with a standing army of roughly 50.000 members. The following divisions exist within the army: