From ShireWiki
(Redirected from Duchy of Yardistan)
Jump to: navigation, search

Historically, the term Yardistan has referred to a larger group of islands known as the Duchy of Yardistan. The county has existed in one form or another since Shireroth left Tymaria, making it one of the older territories in Shireroth. Its history stretches farther back than that, into the days of Alexandros. It is famed for its unique culture and tradition of rebellion and annexation, an activity primarily undertaken by the old Yardistani Annexation Corps. 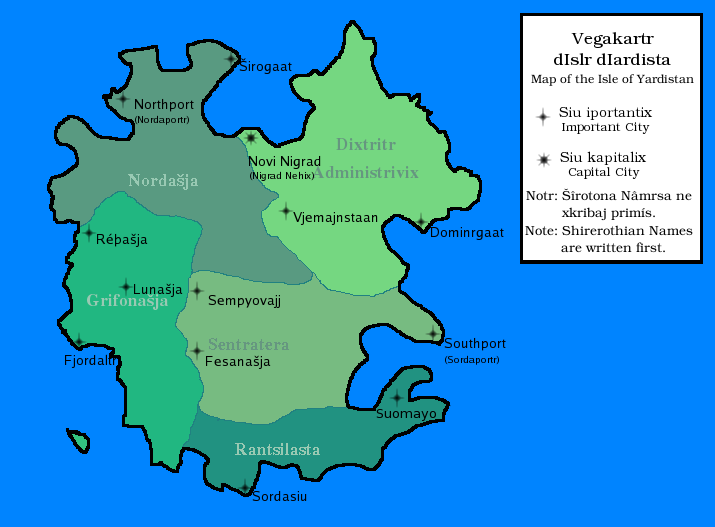 A map of the Isle of Yardistan, showing districts on the island along with important cities.

Shireroth eventually left Tymaria and re-established itself as a an independent realm. Yardistan began to attract migrants displaced by Tymaria's fall during this time.

In order to give his most active citizen a reward for his activity, Gryphon created the Barony of Amity and Mirioth for Gregory Russell. The Barony was Yardistan's first. It also absorbed the former Duchy of Straylight, making it into a barony as well.

It was however, by this time, an increasingly despised and marginalised land, its traditions scorned and its population mocked for its irrelevance and backwardness.

Occasional attempts to revive Yardistan as a Duchy or Imperial State were made over the centuries, inspired by misguided nostalgia. All efforts failed wretchedly.

Over time, Yardistan's decline gathered an inexorable pace. It was decided that the Duchy of Yardistan would be split and merge with Goldshire and would cease to be an independent state of Shireroth. This lead to notable tension and a large scale economic and social decline, which proved to be the foundation for the shortlived Yardistani Workers Revolution.