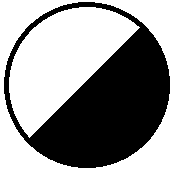 This symbol is rumoured to be used by the Brotherhood and has been found burned into several mutilated corpses found around Shirekeep.

The Brotherhood of the Shadow-Sun is a secret society operating mainly in Greater Shirekeep. Officially a religious organisation dedicated to "the pursuit of truth and elevation", the Brotherhood resides in the Esagila of Raynor, which they have pretty much taken over at around 1663. Critics of the Brotherhood describe the society as nothing more than a bunch of gangsters on the fringe of Shirithian society rationalising themselves with pseudo-religious hooey and ridiculous secret rites.

The earliest mentions of the Brotherhood come from City Guard documents from the late 1650's where several individuals arrested for various crimes described themselves as Brothers of te Shadow-Sun, and refused to cooperate or acknowledge the authority of Shirekeep's government. From statements of these members, it can be deduced that the Brotherhood emerged around 1656 when it was founded by a mysterious individual only known as the Shalafi of Qali.

Secrecy is a key element of the Brotherhood, and very little is known about the aims of the society or the identity of its key members. During their gatherings, the members of the society are dressed in black robes, and often wear masks, which doesn't aid in identifying the members. The City Guard has endeavoured to infiltrate around 1660, resulting in the death of two investigators, who were found hanging under Kaiser Dominus Bridge by their feet. Although the investigation didn't yield the desired results, some information about the secret rites of the Brotherhood have come to light. For instance the following chant, in an answer-and-reply setting, that usually occurs at the beginning of each meeting:

Followers: In me the Wishmaster

In the 1660's the influence of the Brotherhood has seemingly expanded. They gained national publicity in 1663 when they entered the Landsraad Statuary Hall and destroyed the statues of the Froyalanish rulers.

The Brotherhood was also rumoured to have been involved in the politics of Shirekeep, especially around the appointment of Titus Morvayne as Prefect. However, no evidence of this has been found as of yet.

The Brotherhood was briefly investigated in 1663 following the assassination of Mira Octavius without any official result.