From ShireWiki
(Redirected from Z)
Jump to: navigation, search

Ž is one of the most recent inventions as a County in the Imperial Republic of Shireroth, created in November 2008 by the then Baron of K'Tzuni. Although Erik Mortis voiced concern about the miniscule size of the County, its creation was endorsed by the Duke of Brookshire at the time, Malliki Tosha. Part of Hadjimehmetov's decision to create the new county was for a special, autonomous retreat for the Barons of K'Tzuni to maintain a summer palace, from where they could rule without the hubbub and stress of Brookshire's capital of Brookshire Hamlet in Modan-lach. As one of the smaller islands in the historical Khaz-Modan Gulf, Ž has an ancient and rich history, of which its few residents are fiercly proud. Although it has the smallest population of any Shirereithan County, it has become somewhat of a popular tourist retreat for the elite of Brookshire, who maintain wealthy villas and palaces all around the island's secluded coves. This is keeping in fashion with the many ancient residences found when the island was part of a great Khaz-Modani trading post. Underneath the crystal waters, one can see the now submerged buildings of the cities, dating from around b2309 ASC- sometime before the few recorded Khaz-Modani tales of Ke'Najrad. Much of the island's history remains mysterious and highly contented by leading academics in the field. Whilst the extent of the ancient coastline is known- presumably levelled by an earthquake- the ruins which litter the island lay barren until numerous Shirithan Barons pillaged and stole the elaborate carved stones of the mausoleums from the necropolis, which can now be found inside numerous Baronial palaces across Shireroth. Laqi fishermen began to move to the island just after the gradual decline of the Khaz-Modan Empire, and the island is now almost entirely Laqi-populated- the majority of the two major cities, Akhuleti and Kanarrh, were buily by Laqi immigrants using pillaged stone from the old Khaz-Modani ruins. The strange name of the County, Ž, is one of the few non-Laqi names. It is believed to be the pronunciation of one Khaz-Modani hieroglyph which is found on the mysterious obelisks which can be found across the island. Pronounced zh, the name Ž has entered the Laqi language as a synonym for a a former Khaz-Modani Island such as this one.

Map of the County of Ž 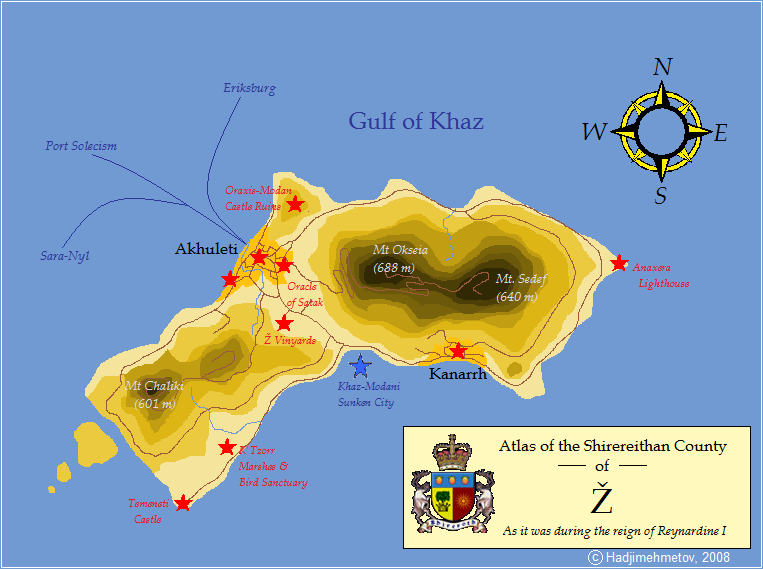