The Prefect's Keep is the name of the current Prefectoral complex in the capital city of Shirekeep. It is built in the same location as the Prefectoral Palace and fulfils much of the same functions. The Prefectoral Palace had burned down during the Year of the Four Kaisers and the site had been rubble until this latest project was approved for construction. The remains of the previous structure were cleared and the site was excavated down to the bedrock and rebuilt with an extensive substructure. It has not been officially confirmed, but anonymous sources indicate that the new Prefectural Complex connects to the old IAC underground tunnels, suggesting that these too are being refurbished for the discrete transportation of government notables throughout Shirekeep. The construction of the complex from scratch has allowed the city government to include features that would not have been available had the old palace simply been rebuilt. These include a defensive perimeter which, during a moment of crisis, can raise a hardened barrier all the way around the complex and protect those inside from virtually anything below armoured vehicles. 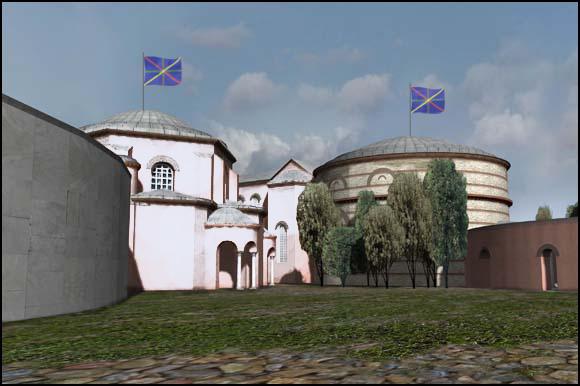 The Prefectoral Palace, seen from the garden.

On 1576 AN, with Imperial Decree 482, in which the function of Lord Mayor of Shirekeep became Prefect, the Prefectoral Palace was built to house the Prefect of Shirekeep and Skyla. The palace was located in what was then known as the Boreal Quarter. As a result several Elwynnese and Hyperborean houses which has stood there for centuries were broken down and replaced by a palace.

The palace was surrounded by walls, just like Raynor's Keep, which had the purpose to protect the Prefect and citizens during an attack of the city. Besides that, the location of both the Prefectoral Palace as Raynor's Keep gave the defenders the chance to help each other by bombarding the enemy forces from two sides (the palace had its own artillery and guards).

In spite of these precautions the palace was burnt to the ground during the Year of the Four Kaisers (1644 AN), and the site remained derelict for seven years until construction of the replacement was begun on the initiative of the Prefect, with the support of the Shirekeep reconstruction commission.

The government of the City of Shirekeep was to be returned to the site of the old Prefectoral Palace, which would become the site of its new central administrative building. The building, dubbed the Prefectica, after the Prefect of Shirekeep, served as a hub for a new complex whilst it remained under construction at the site of the old Prefectoral Palace. The Prefect's residence, city courts, open-air market, park space, and city archival facilities were added in subsequent iterations.

The Prefectica had its official opening and completion postponed until 1651 AN, to avoid a celebratory atmosphere during the period of mourning decreed for the late Kaiseress Noor. 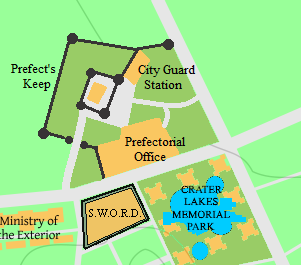 The Prefectural Complex covers 6.51 hectares, with much of that space given over to barracks for the Scholae Apollonae, the Prefect's personal legion. Four permanent structures occupy the complex: the central Prefectica -- where the majority of city administration is housed along with several public spaces for events, the Prefect's Residence, the Central Court Building, and the Hall of Records. Phase II construction plans remained on hold as of 1658.

Concurrent with the construction of the Prefectural Complex the Reconstruction Commission oversaw the repaving of the intersection of Kaiser's Boulevard and Nobles' Avenue into a roundabout of significant proportion which serves as the base of a new monument, tentatively named the City Tower. When complete a sizeable victory column, consisting of a golden-bronze and wrought-iron status depicting the scene emblazoned on the Shirekeep's flag -- a shining angel defeating a daemon at the point of a spear, will tower over the neighbourhood.