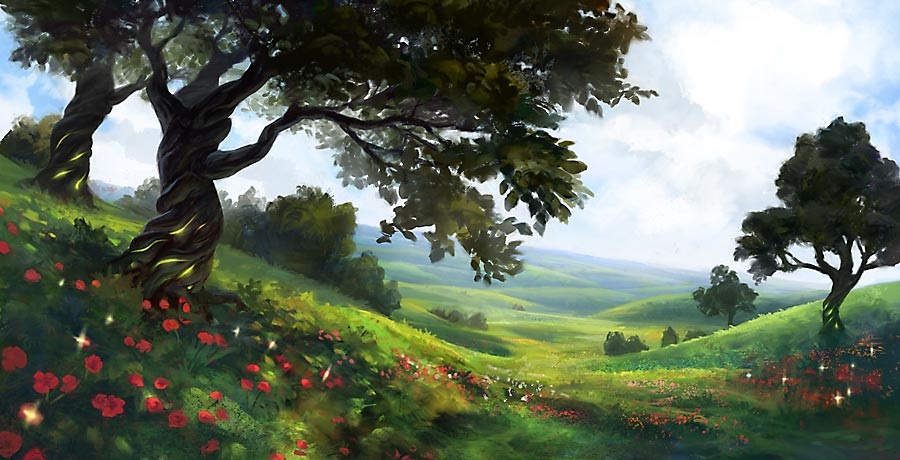 View of the Barrowlands of the Vale of Angularis.

The Barrowlands is an area of extensive plains in the Deep South which was formerly situated in the Elwynnese Emirate of Alalehzamin and Utasia but which now forms a part of the State of Modan as the Angularis. It is very rich in archaeological remains and ancient lore.

Between the years 1640 and 1651 the area was administered as a Bailiwick of the Elwynnese Union. It was subsequently transferred to Malarboria after the partition of Elwynn and was the first territory to be liberated from the Daemon-Queen in 1662.

The Barrowlands is a region which has been shrouded in mystery for inumerable generations. An ancient land of wide, grassy hilly plains where half-hidden doors in the sides of hills open onto labyrinthine caves that wend their way through darkness to reveal unimaginable wonders and vast treasures deep beneath the earth. There are also numerous barrows - the ancient graves of the Elwys, from which the name of the area has been derived - to be found. The largest barrow, the Great Barrow which is situated in a hamlet called Kalmyn, is said to contain the grave of the Great King of the Elwys who was also known as the First Barrow King.

After the restoration of order in Angularis the district was divided into two UDF training areas, the Northern Training Area around Fort Durable and the Southern Training Area around Fort Indefatigable. The Barrowlands has become the permanent garrison of the Elwynnsbrigad 2 Alalehzamin, a Panzer Brigade, which plays host to a wide variety of visiting forces seeking to practice their anti-tank warfare skills, including company and battalion level detachments from UDF allied militaries such as the Imperial Forces.