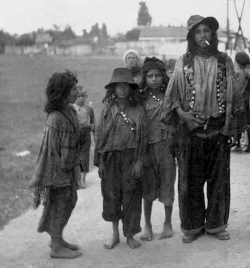 Octalunes: A despised and marginalised "criminal tribe" of Goldshire. 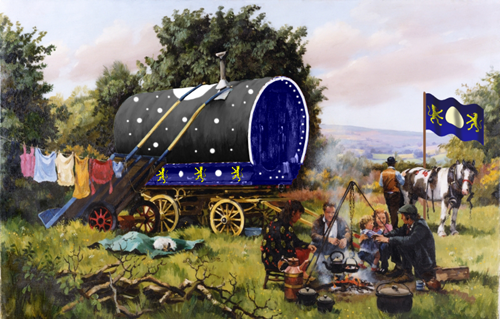 An Octalune caravan: the nomadic way of life was frequently romanticised by outsiders.

The Octalune, outcasts even amongst the Lunatics, were all over the country, comprising of many hundreds and thousands of men, women and children who eked what living they could from trades which, though not themselves illegal, often offered opportunities for robbery and fraud. These people were almost as diverse and inventive as the professional villains. They included pedlars, tinkers, jugglers, conjurers, fortune tellers, exorcists and alchemists, to say nothing of the fake collectors of charitable contributions – the infamous 'Chuggers' found on every high-street in Eastern Benacia – and that most hatred troupe of individuals, the 'Actors' drawn from the cast off alumni of the Lunatic playhouses. These were the ragged and colourful lunatic fringe of rebel society in Southern Goldshire. Once the Octalune, during the reign of the Yastrebs, had roamed freely across southern and eastern Benacia but since the coming to power of the Kalirion Queen and her Corporate enforcers, the ESB Group, their liberties had been steadily and quietly circumscribed until at last they were pushed back behind the boundaries of Lunaris itself. With the civil war, they were free to roam once more, at least within the liberated areas, but they did so at the risk of being attacked and plundered by those Rannish lords who hated them for their nomadic ways and endless poetry. The lords of the Uí Lysaght Banner were especially fond of hunting the Octalunes and of wearing their flayed skins.

Nor did those pedlars and tinkers who were not shorn of their living flesh stand very highly in the estimation of those communities they served. Yet they were often the only regular link with the outside world in towns and villages where normal services had been disrupted by conflict and decades of neglect had caused roads to deteriorate to the point if being no better than rutted tracks in dry weather and marshy troughs when it rained. In places too small and despised to have shops, the Octalune caravan served as linen-draper, hosier, glover, perfumier and stationer rolled into one. Usually the Octalune would sell in one village what they had plundered or purloined in another.

In earlier times, when the Octalune were migrant workers or tinkers, everybody needed them; they were accepted. However, as Shireroth slowly re-industrialised after the Cabbage Crisis they lost their function in society, and had to find other ways of doing business. The failure to do so, without resorting to wanton criminality, has lead to a breakdown in relations between the Octalune and the non-Lunatic segments of society, as a consequence of the loss of their function in mainstream society. In modern times the Octalune have become to many just yet another face of the alien other; quite an achievement for an impoverished band of travellers on a continent shared by humans with Deep-Singers and Liches.

Since the reign of King Ryker all Octalunes have been obliged to register their ethnicity as Goldshirerian. Whether this is an attempt to suppress separate ethnic identities or merely to fob off Imperial census takers is unclear.

Octalune caravans were once a colourful feature of life on the roads in Benacia. Though, since the Battle of Holwinn, their numbers have dwindled and have largely retreated to the isolated flatlands of northern Lunaris.