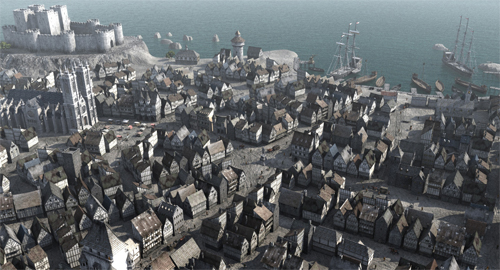 The capital of Kildare, Blackrock Nua.

In Blackrock Nua the Barons meet each other to advise the Duke in the interior affairs, they form the Ducal Governement of Kildare. The Seanad had been moved to Apollo City, while the official seat stayed in Blackrock Nua (which also stayed the capital).

Historians are almost sure that Blackrock Nua was formed in 436 in the Golden Age of Jasonia. However, there was life in the city several ages before this happened (around b4000 ASC the first people arrived). The city lied between two chains of mountains, and originally existed out several little villages. The mountains made it easier to protect the land, so the villages in the valley worked together to build two giant walls to protect the villages and valley. The defence of the valley was a giant wall in the North and South (the Outer Walls). In the West and East they were protected by the mountain chains. Trough ages the small villages grew and became more dependent of each other to survive. In 436, after the arrival of some Blackrockians who wanted to restore order, the villages were unified as one large city: Blackrock Nua. The city became powerful and its rule extended over whole Blackrock. Blackrock Nua got several rights and privileges and became de facto an independent city state with a king as ‘mayor’. In 454 the city swears allegiance to the Union of Apollo States.

With the decline of the Apollo Sector and riots and chaos occur through whole the UAS, Blackrock Nua became one of the only places where it was relative safe to stay. The kings of Nua became aware of the importance of the Outer Walls and decide to build an Inner Wall to protect the (new) center of the city, where the rich lived and the most important buildings were. King Constantine III ordered in 900 ASC the creation of walls to isolate the several different quarters within the city. In the past, when the UAS Riots occurred, it was proved that the citizens of the city could be more dangerous than an external enemy that sieges the city. In time of riots the kings could be sure that the little walls between the quarters could avoid that a riot extended to other quarters.

The Lost Ages were devastating for the counties within Kildare. The central government weakened and the local leaders became even more powerful. The kings of Blackrock Nua became absolute masters over their city and the Kildarian dukes decided to move to the city and make it their capital so they could control the kings better. In the history of Blackrock Nua, not once an enemy army could conquer the city and take over the Outer Walls. It’s a living example of the militaristic history and knowledge from Blackrockians.

Glinet, abbreviation of “glide net”, is the most used and popular transport net in Blackrock Nua. This way of transportation was even used before the official formation of Nua by the several villages in the valley. The system is easy: there are several stations between the different quarters. Just like there are normal roads there are also “glide roads”. Instead of walking over these roads, you glide with an incredible speed. There is a lot discussion between magicians and scientists what drove the Glinet first: magic or machines? It’s very likely that machines were used, just like now, from the start. Blackrock was after all one of the most developed areas in that time. On the other hand, historians don’t know when the first version of the Glinet was built. So it’s possible it was built by mages and later, when there magic wasn’t powerful enough the machines took over the job.

Places you need to visit

House of the Duke and resembles the new Kildare. Built by Duke Jonas I.

The Aya Soloria was built by king Justin IV in 989 ASC as Soloralist temple. In 1356 ASC appeared seven crystal on the towers of the temple. On the top of each of the four towers is one crystal, the three others are locked up in the temple itself. In the past rumours existed and it’s told that the Aya Soloria is the new seal that avoids parallel travelling.

Named after the Soloralist god of Good. The Mithaniel Colosseum was built in b213 ASC after the regional leaders of Blackrock holded a meeting. They realised that magic was weakening and exploring technology became more easy then exploring magic. The regional leaders don’t want too lose their love for magic entirely and decide to built a colosseum where mages can fight against each other. By using several technological devices even the weakest form of magic gives a very nifty show. In 2167 ASC the Duke of Kildare forbids the mages to fight to the dead. The magical fights stay a spectacle and a nice family trip.

Clistiro Plaza, named after the Soloralist god Clistiro, is the district with some of the more important buildings of Nua. It’s a large plaza behind the Inner Walls. The Mithaniel Colosseum, Aya Soloria and Seanad are all settled here.

The Eastern Mountain Quarter is build on the mountain slope in the east. You can find the richer population of the city here. It’s also famous by other Shirerithians that want to buy or rent a holiday house. Who has a house in the Quarter has a very good view over the city. All the houses in the quarter have a neat garden.

The City of Blackrock Nua is the largest one since Airosamente (with the difference that the buildings aren’t so high and there aren’t as much citizens). Trough the ages it was used as a refugee camp for several people. Those people formed communities, and after a time whole quarters existed. Behind the Outer Walls there was enough space for all those people, from different cities.

Together with the creation of New Jasonia a lot of Jasonians flew for the war between Jasonia and Shireroth. Before the war started they were a small community that lived between the Halluci’s. After the collapse of the Jasonian isles in sea, more came and the king granted them there own land. The Jasonian Quarter was born!

The Hallucigrad Empire collapsed in 2623 ASC. Over a third of the population died and a large part of the Halluci’s escaped to Blackrock Nua.

Around 330 ASC Kaiser Brrapa V banned a long list of foreigners, especially Babhkans and Atterans. The banished foreigners spread over the rest of Shireroth. Kildare, that wasn’t part of the Imperial Republic yet, became one of the places that interested the refugees. The Babhkans, famous for there evil plans, were forced to live in Blackrock Nua in an isolated part of the city that later became the Babhkan Quarter.